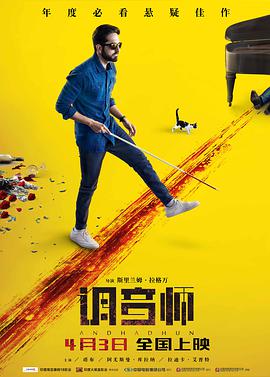 Today, I'd like to tell you about an Indian suspense film "The Tuner" that you won't be able to guess the ending until you see the last second.

The main character, Aniu, is a down-on-his-luck piano player who lives in a low-cost apartment allocated by the government.

In order to survive, he pretends to be blind to gain the sympathy of everyone

He pretended to be blind in order to find creative inspiration

Aniu meets a beautiful woman, Cuihua, while crossing the street

Cuihua's family owns a restaurant and needs a pianist

He even won the appreciation of the old star Wang

Because tomorrow is his and his wife Simi's 20th wedding anniversary

The next day Aniu arrived as promised

Simi looked panicked as if something had happened at home

When Niu went to the toilet

In order not to reveal anything, Niu pretended not to see anything

There was a strong man hiding in the bathroom

Niu was so scared that his liver trembled

Fortunately, he pretended to be blind to avoid a disaster

A Niu face confused what the hell is going on here

So this adulterer is very talkative

Just when they were ready to destroy the body

A cattle suddenly arrived to appear just now the scene

Simeon and his lover were disposing of the body

while using the old king's recording to fool Aniu

He rushed to the police station to call the police

Niu had an idea: his cat was missing

Aniu did not change his face, did not leave any weaknesses

The death of a big star is not a small matter

In order to clear the suspicion

Simeon and the bearded man faked the scene of the crime

Saying that Old Wang might have offended his enemies

At Wang's funeral, a neighbor told the police that

One was a blind piano player. The other man was a strong man

And Old Wang had gone home before them

Never saw him go out

When Simi learned about this, she thought the old lady was a scourge

This scene was just seen by Aniu

She put poison in Niu's coffee

Niu is not stupid, of course, refused to drink it

Simi found out that Niu was not blind

So she made him truly blind

And then she framed him for having an affair with herself

Cuihua was devastated and wanted to break up with Aniu

At night, the bearded man sneaked into Niu's house and tried to kill him

Then he ran out

When he woke up from the coma

He found himself admitted to the hospital by a couple

Niu pleaded with the doctors to fix his eyes

However, this was a black clinic that specialized in selling human organs

Then the three of them would share the money equally

Niu said: "If you let me go

Niu asked the neighbor man and the doctor to kidnap Simi

To record the evidence that she murdered her husband

Unexpectedly, the person who answered the phone was Beard's wife

His wife was very angry and wanted to kill him

Then the bearded man used sweet words to coax his wife

And then take 10 million to exchange hostages

On the other hand, the three doctors tied Ah Niu and Simi together

They wanted to take the money for themselves

During the transaction, the bearded man took the opportunity to injure the neighbor man

The $10 million is also a pile of waste paper

Simeon escaped and tried to kill Niu to silence him

Fortunately, the doctor arrived in time to save his life

But they accidentally found that Sime's liver

was a match for the daughter of a Middle Eastern tycoon

It's a double whammy

A few years later, Niu came to London to work in a bar

and met Cuihua by chance

So Niu told Cuihua what happened on the last day

It turns out that on the way, Simeon took the opportunity to kill the doctor and tried to run over Niu

At the critical moment, Simeon hit a hare and received a lunch box

But the hare was unharmed Cuihua said.

Why didn't you use Simeon's cornea to heal your own eyes?

That poisonous woman deserved to die for so many people

Aniu looked at Cuihua and left in a hurry

When he went home, he knocked the drink bottle away with a stick

In fact, Niu's eyes were not blind

Otherwise, how else would he know that Simeon died after hitting a rabbit

Just to give Cuihua a good impression

In fact, they have already finished the deal with the Middle East tycoon

Then they took the money and flew away to London

I do not know how you understand the ending

This article was published by the #author at #Time on the #website name, if in doubt, please contact us.
本文链接：https://www.toomic.com/movie/102.html