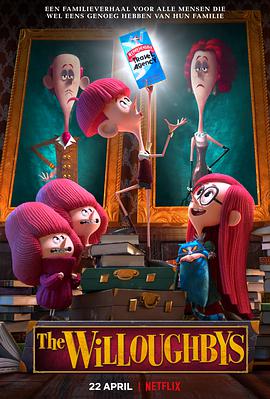 Today, I would like to introduce you an animated movie

In the street of modern building

There is an old house

In it lives the Willoughby family.

Each generation of their family has a distinctive eight-bearded symbol

All the way back to Tim's parents' generation.

They obviously had four children.

But all they wanted to do was to have their own life together.

The four children were sent to live in the coal bin in a large house.

Tim was the oldest in the family.

He had a sister, Jane, and twin brothers, Barnaby

But he is still determined to revive the Willoughby family

Back to the old days when the family could eat together

But then, one day

A child fell out of the sky.

This child made a big mess in the house

Making a mess of the house

They kicked all the children out of the house

When the children were sent away

The four of them would come home again

So the four children, with anxious hearts

Then, they secretly put the child in a candy store

On their way home

Jane had an idea

Instead of suffering from the destruction of their parents

I'd rather just become an orphan

Parents abandoning their children is one thing.

On the other hand, how can a few children abandon two adults?

And started planning what the parents really wanted.

A romantic and insidious trip.

So they planned an accidental death tour.

Death by heat in the hottest places

Drowning in the wettest places

Or become a feast for cannibals

Or frozen in a glacier.

Dissolve in an acidic pool.

Or being chased to death by a bear

If you can get away with all of these

The final destination can be an unclimbable mountain

Climb up and never come down

Then his parents went on a trip with great enthusiasm

So these two have no brains

Do not think more about the suspiciousness of this thing?

Deserved to die in the end

And as soon as the parents left

Tim and the others immediately let go of their natural instincts

They started tearing down the house.

Before the house was not allowed to make any noise

Now they were just having a good time

But as they played

And Tim, as the eldest brother, took on the responsibility of cooking

No wonder the twins were shivering

The nanny hired by their parents came to the house

Do you think it is quite conscientious?

No, the nanny was the cheapest one they could find.

And it's not that they're afraid of leaving their children unattended

They were afraid that the child would break up the house

After the nanny came to the house

First, she cooked for the children

But Tim was very defensive

Instead, she found out about the family

So they went to the store.

They rushed in and found out

There was a candy factory in the back.

Fortunately, the nanny saved the child in time

Then the shopkeeper began to chat with the family

This scene made the children feel warm and fuzzy

However, back at home

In order to defend the house

The four of them made a mechanism overnight

And with the help of the nanny

successfully scared everyone away

This was a big deal.

So the orphan homeless group came and took them away.

They were separated and put in different places.

Jane came to a house of a man who liked music

And Tim refused to change

Coming home only to find their home gone

Yet the nanny still couldn't let them go

So she sneaks into the orphanage

Then the five of them were reunited

In order not to be taken back to the orphanage

They felt they had to find their parents

According to the previous route

They went to the candy factory and made a spaceship

When the nanny wasn't looking

The four of them secretly left first

At this time their parents were climbing the last mountain

Even though they were freezing to death

After a few days of flying

They arrived at the high mountain

Through the red rope clue left by their mother

They came all the way to the mountain

After searching for a while

Finally found their parents who were frozen

And confessed their plans

Pleaded with them to come back as parents

Thought they would change

And then selfishly drove off in the spaceship

As a result, the ship had an accident and went down

Just when the children were about to freeze to death

Nanny came in time to save them

Finally, the nanny adopted the four of them

They were reunited into a complete and happy family

That's the end of the story

In fact, their parents did not fall to their death

Instead, they just fell into the sea after they fell

They were finally eaten by sharks

Such selfish parents have finally gotten their comeuppance

Since they gave birth to them

They must be responsible for them

This animation is very innovative

It leaves behind the usual family-friendly scenes

But eventually, with the care and attention of the nanny

They also begin to be touched

The darkness inside them is dispelled

This article was published by the #author at #Time on the #website name, if in doubt, please contact us.
本文链接：https://www.toomic.com/movie/116.html