This film is based on the famous French novel of debauchery, which has been adapted into different versions of films, movie collections and stage plays.

In the 1930s, under the guns of the Japanese army, Shanghai's upper crust was still lost in a world of paper and gold. Xie Yifan ((played by Zhang Dongjian) was a famous playboy in the sex scene, and Mo Jieyu ((played by Cecilia Cheung) was a wealthy widow with a lot of charm but a lot of secrets. Mo encouraged Xie to seduce Bei Bei, a young girl who was about to marry a wealthy businessman who abandoned her. Xie, on the other hand, did not feel challenged enough and becomed interested in the innocent widow Du Fenyu ((played by Zhang Ziyi), who came from a famous family. Immediately, Xie and Mo started a game of betting with Du as the bait. The bet was that Xie gets Du's body and the prize was Mo's body, which Xie dreamed of. For Xie's pursuit, Du from the beginning of the resistance to later deeper and deeper, and Xie also found himself in love with his prey, all this made Mo angry. When all morals and taboos were completely broken, the men and women of these games had fallen into the river of desire, planting the tragic results ...... 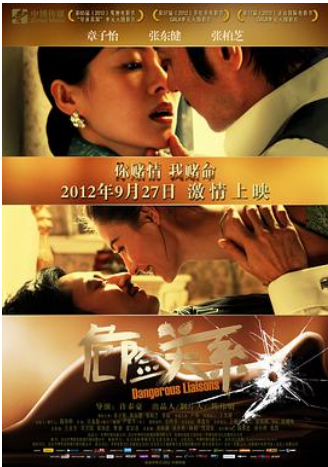 Sometimes, people are just cheap. They don't cherish what is in front of you, but to risk the pursuit of their own can not, until after the loss will come to their senses. Just like Eason Chan's song "Red Rose" sung in the same - What you can't get is always in turmoil, and those who are favored are fearless.Today, Uncle Seven tells you a love ethics story about an upper-class male Xie Yifan, a young widowed Du Fenyu and a banker's widow Mo Jieyu, who are involved in a love whirlpool due to a bet.

In the 1930s, in Shanghai under the Japanese artillery fire, Xie Yifan was a famous playboy in Shanghai who often had his feet in two boats and played with other people's feelings. This feeling was very enjoyable to him. He felt that no woman in the world could escape from his palm. At this time, a beautiful woman in a plain cheongsam stood by the window. Then how could Xie Yifan, who was a playboy, miss such an opportunity! He immediately went up to greet her, but scared the woman to run to her grandmother's side. It turned out that this woman was Grandma's distant cousin, Du Fenyu. She had just lost her husband because of the war and had  sought refuge with your grandmother . Du Fengyu was a very important soul character in the whole film.

At this point, the scene shifts to a noble and elegant woman, Mo Jieyu. She had a certain status in the Shanghai business world and she was also very resourceful. While doing an exclusive interview with a reporter, Mo Jieyu accidentally read a news about the electrical appliance king Jin Zhihuan marrying a college girl, Bei Bei. From her expression we can see that there is a certain ambiguous relationship between the two. At this time, Xie Yifan also saw the news at home, and his mouth was slightly smiling. Obviously, he knew something inside. After that, Xie Yifan was invited to the senior ball held by Mo Jieyu, and he unceremoniously revealed her relationship with Jin Zhihuan. Mo Jieyu was also not lukewarm. Facing her old acquaintance from the past, Mo Jieyu makes a request. As the saying goes, it is better to offend a villain than a woman. Xie Yifan was obviously not interested in the request she made. At this moment, his interest was all on Du Fenyu. As a playboy, he had never seen such a simple and innocent woman. Mo Jieyu reads his mind and makes a bet with him - if Xie Yifan succeeds in sleeping with Du Fenyu, he can get Mo Jieyu.

This article was published by the #author at #Time on the #website name, if in doubt, please contact us.
本文链接：https://www.toomic.com/movie/12.html

下一篇
I HOPE YOU ARE WELL