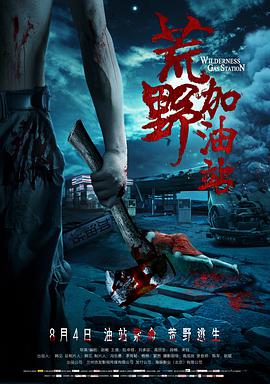 Today I bring you the Chinese horror movie

This movie starts with a man driving on the road.

He hits a woman in a red dress

Then the scene comes to the gas station

Jia is putting on makeup in the toilet.

After a while, Pinto walks in

Jia Jia knows someone is coming to get gas.

A woman outside the gas station was frightened by the look in Pinto's eyes.

So she threw the money out of the window

and left in a hurry.

Jia Jia in the store was bored

wanted to chat with Pinto.

But the other side was busy with work

Then Jia Jia told a horror story to the other party.

At the critical moment of the story

a tough guy in a big truck walked in

Upon seeing Jia Jia, the lecherous man started to tease

Instead, he got happier

After a while another man came in, Brother Suit

Flathead went out to meet him

He saw him talking to the empty car

The man in the suit got out of the car

Said to the flat-headed man

It's not polite to stare at a lady like that

Then he went into the store and took a few things

He came to the counter to pay

He said Jia Jia is his wife

And went up and grabbed Jia Jia's hand

At that moment, another rich fat guy came outside

And an actress who is not famous

The man in the suit went out and bumped into them

He took out the marriage certificate he found in the car

After looking at it, he said

I will not get involved and left in a hurry

After the lecherous man got in the car

But not the same person

Then chased the air and ran out

The fat couple bought something

So the fat couple checked into the gas station hotel

The man in the suit also ran back from outside

Tough guy chose to sleep in the car

In the middle of the night, the man found

was knocked out from behind

He died in the bathroom

His girlfriend screamed when she found out

He hurriedly pulled Jia Jia to the store

And blocked the door with something

The man in the suit suddenly appeared outside the door

He tried to enter but was blocked outside

The man in the suit had just buried the lecherous man

While they were talking, the man in the suit

jumped in through the window

The man in the suit said to Jia Jia

You come to my side

and said that Pingtou was a dead maniac

But Jia Jia didn't believe him at all

While hiding in the shadows

knocked the man in the suit unconscious

and tied him up in the hotel

After the man in the suit woke up

Flathead slapped him a few times

Then the two of them hugged and cried

Jia Jia was looking for his cell phone

accidentally overheard the conversation between them

Just as Pinhead was about to strike

Jia Jia outside the door was found by him

Jia Jia was so scared that she rushed out.

He ran after her

As Jia Jia was running

The driver also chose to flee

He said he escaped here only because he was dead

He was the one who deserved to die

After he ran far away

When he got out of the car to vomit

He found the blood on the headlights of the car

Flathead came to the car wash to wash the car.

Then went to the office and submitted his resignation

Turned in the keys to his car

But he missed picking up his wife because he was drinking

He received a notice of his wife and daughter's death

And the flat-headed man kept

staring at the TV

At that moment the former leader's phone rang

He asked why there was blood on the car.

Flathead panicked, he thought the car was clean

Just as he was about to die himself

Pulled back by his daughter's voice

The man in the suit came home

Lying in bed looking at the family portrait hug and cry

Jia Jia arrives at a restaurant

Waiting for her is her boyfriend's breakup

Putting on a red dress, she says

This is your favorite red dress

It's a pity you can't see it anymore

Then there was a series of accidents at the gas station

At this time the man in the suit

was still firmly tied to the chair

Flathead used a knife to untie the man in the suit

The man in the suit angrily pushed him to the table

Asked why he didn't kill himself

He also told him to kill himself

He said that this way he could take revenge

Brother Suit tightened his grip on the knife

This film tells us

Doing the wrong thing must be brave to face

Escape is not the solution

It will only bring worse consequences

Okay, that's it for today's story

This article was published by the #author at #Time on the #website name, if in doubt, please contact us.
本文链接：https://www.toomic.com/movie/133.html