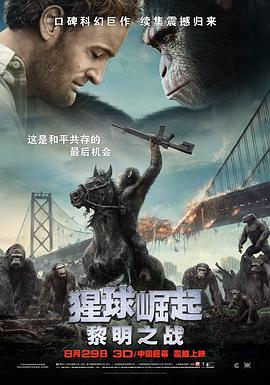 This ape is killing its prey.

The brown bear next to him rushed out like an arrow.

Saw his son's life hanging in the balance.

Caesar quickly jumped to the rescue.

But brown bears are invincible on land.

Slapped in the face. Either dead or injured.

It can only hide.

Sure enough, the brown bear fell for it.

The ape from behind penetrated his vitals

This brave orangutan is called Koba.

The same fate as Caesar.

The body has been genetically modified.

From the end of the first part of the episode.

The apes all retreated to the forest.

They were led by Caesar.

From the first hundred "apes"

to a thousand "apes" now

to build their own kingdom.

They lived by hunting.

They never meet with humans.

But on this day

The eldest son was on his way home

He met a human exploring

The humans chose to shoot directly.

Caesar woke up from his sleep

Quickly rushed to the scene with the apes

When the mighty army of apes appeared before the humans

Fortunately, the wounded apes were unharmed

The leader, Big Strong, saw what was happening.

Caesar held back his anger

Scaring the humans into motionlessness

Only then did they scramble for their lives

The wise Caesar sent Koba after him

To prevent them from turning back again.

As the car came to the end.

On the bridge, he saw an unbelievable sight.

The city had been turned upside down.

It turns out that the genetic experiments 10 years ago

The ape flu that infected humans

The human population has been decimated

Only a few humans survived because they were immune.

Koba found the human base

So he immediately went back to tell Caesar

And decided to go to war

To avenge the apes

After hearing this Caesar refused on the spot

Because if we go to war.

The final result is that both sides lose

Not to mention that it was for personal revenge

But in order to deter humans

They still have to knock the mountain to shake the tiger

So the next day

It led the apes into the human city again

When the humans saw the army of apes.

Only Dajiang dared to negotiate.

To assert their sovereignty

（"But if there's no other choice)

（"We will fight to the death)

He gave the forest to the apes

And gave the word.

No humans will be allowed to enter.

Before Dajiang could say anything.

Caesar withdrew with his army

However, the leaders of this negotiation did not agree

Because the fuel was about to run out.

They had to go to the mangroves to restart the hydroelectric plant.

The leaders decided to attack by force

But Dajiang thought they could negotiate

Asked the leaders for three days

Then he set out on the road to peace talks alone

The skeletons of goats were everywhere

Step by step, he tried to go forward

Suddenly he felt a creature behind him

Turning back to see

It was a big, strong vajra

There were more and more gorillas around him

They took him away and brought him to the gorilla base

The big strong man made a strong statement

That the humans are harmless.

He just wants to rebuild the hydroelectric plant.

He said he was going to execute Dazhong

But Caesar stopped him.

We went to the hydroelectric plant to check it out.

Do not carry any weapons

But the next day, during the construction

The youngest son because of playfulness

accidentally found a shotgun in the box

His companion was a thief

The situation was almost out of control

At the nick of time

that he knew nothing about it

But Caesar didn't believe him.

He asks them to leave immediately.

He came to his wife's bedside.

He looked at his wife, who was dying.

But there was nothing he could do.

Dajiang, who was determined, came here.

Looking at the dying mother ape

The mother ape was saved and Caesar thanked them

So he gave them another day

And also sent an ape to help for free

Koba went to the city to scout.

But he found that the humans were mobilizing their troops

And accidentally found an arsenal

He found that there were enough hot weapons to destroy the entire ape race.

He was just about to go back to report the incident.

Then the guards found out and almost died on the spot

Luckily, he was smart.

Play dumb and cute to avoid a disaster

But when he returned.

He saw the orangutan working for the humans.

Accusing him of having only humans in his sights

He had no regard for the safety of his people.

In the face of this provocation

He grabbed Koba and beat him up.

But the ape's principle of not killing its own kind

So he didn't kill him.

Koba submitted on the surface

But inwardly, he was already rebellious

First, he provoked his eldest son

To make him and Caesar have a conflict

Then he ran to the human base

That night, with the help of the orangutan

Trust was established between the two sides

Caesar invited them to the base as guests

Just as he saw the danger

He was shot by Koba from the shadows.

As Caesar fell off the cliff

The base of the apes was in chaos

Redhead saw the danger in the situation.

He let Dazhong and the others go beforehand

The ignorant eldest son held up the incriminating evidence.

He thought it was the work of humans.

Koba held a meeting of the apes.

On the pretext of avenging Caesar's death

He wanted to slaughter the city.

With his impassioned speech

The hatred of the apes was pushed to the top

They were so fast.

In a few moments, they were in the human city.

Before the outpost guards could react

Before the guards could react, the army broke through their defenses.

First they rushed to the weapons depot to grab equipment

Then they quickly march on the humans

Because of the high ground.

In the first round of attack, the apes suffered heavy casualties

The eldest son hid in the shadows

Seeing his compatriots fall to the ground

He felt a trace of remorse

At that moment, the brave Koba rushed out

With a passionate heart and two machine guns

He pinned down the enemy under the fortifications.

The leader was furious.

He pulled out a rocket launcher and aimed at the oil barrel.

The gorilla seems to have become smart

Dexterity on the step of the wire attack

So he took him to the car

He was going to take him back for medical treatment

Just as he entered the city, he realized that the situation was over

They had to hide in Will's house.

The humans had lost the war.

"The apes began to invade.

He asked the ape to kill the old man in front of him.

And said that Caesar would not allow the killing of innocent people.

However, his heartfelt words

He dragged him to the high platform

And then brutally threw it to the ground

Looking at Koba in front of him.

The eldest son was overwhelmed with fear

Then Koba took control of the gorilla army.

Not only did he ban the humans.

They desperately needed medicine to help him operate

In order to stop the war

With his familiarity with the terrain

But just as he was about to leave

A group of gorillas rushed in and swept in again

He had to find a place to hide first

In the process of hiding

He brought him here.

Then the oldest son learned the whole truth.

It turned out that his father had been injured by Koba

When the operation was over

He immediately apologized to his father

But Caesar didn't blame him.

Instead, he blamed himself for trusting Koba too much

Then the eldest son returned to the base

He took the redhead and his loyal cadre out of the prison van.

Then he brought them to join his father

They went through the subway tunnel

They made it to the top of the tower

When they saw the sickly Caesar

Instead, they rushed up and fought for their lives

As long as Caesar is defeated.

He is still the leader of the apes

But he had underestimated Caesar

Even though he had not recovered from his old wounds

It still has the power to fight

And the fall just now

Koba was wounded by a sharp blade.

Furious, he grabbed the iron bar and hit it as hard as he could.

But Caesar doesn't take it head on.

He was waiting for a chance.

He waited for his opponent's strength to fail.

Caesar hits him with precision.

Attacking his weakness with his own strength

Catching it with his foot and then pushing hard.

This is the real powerhouse

And under the high tower

Only to find that they had contacted the army

And planted a bomb under the tower.

He wanted to buy time for Caesar

Numerous gorillas were crushed under the rocks

He picks up his partner's rifle

He started shooting at Caesar.

As he watches his kind get hit by stray bullets.

He leaps and pounces on Koba.

Koba is hanging in the air.

He couldn't climb up because of the wound in his abdomen.

He looked at Caesar and begged.

"Orangutans don't kill their own kind.

You're not an ape.

After it was over.

Dajang came to him quickly

Say the big army is coming.

He should take the orangutan and escape as soon as possible

But instead it told Bigstrong

The war has begun and it is impossible to escape.

Just two sentences, but some kind of opening preamble.

Finally, the ape surrenders to Caesar.

It is still the king of the apes

This article was published by the #author at #Time on the #website name, if in doubt, please contact us.
本文链接：https://www.toomic.com/movie/142.html