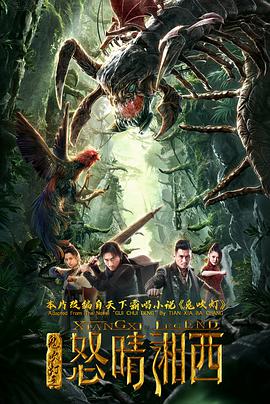 According to their motives, methods and clans

They were divided into the "Touching Gold", "Faqiu", "Moving Mountain" and "Unloading Mountain

While the two sects of Fanshan and Shuiling

It is rumored that Shuiling relies on force

Tens of thousands of disciples act together

They can dig up a mountain and find the treasure

That's why it's called the Dismounting Boat

While the mountain removal is done by magic

They don't do it for money

They are looking for medicine

For hundreds of years, they have been searching for the magic pearl

to lift the spell of their own people

Originally, these two schools did not interact with each other

But by chance they met in the mysterious and dangerous

The movie version of "Ghost Blows Out the Light

During the Republican era, the warlords were at war and the people were living in a state of unrest

A treasure map of the Dandu Immortal Palace

This Dandu Immortal Palace is the legendary secret palace

Until after the Qing Dynasty

So there is definitely gold and silver mountains inside

Rumor has it that in this Dandu Immortal Palace

And the legendary elixir

If you take one of them, you can live forever

Such a great temptation is in front of us

However, he does not have the method to find the dragon

It is difficult to see the real dragon

To put it bluntly, they are not good enough

What is this painting simply can not read

So Luo Laoquan had to find

At a glance, he saw the hidden secret of it

He folded the map into a cross

Then unlocked the location of the Palace of the Immortals

It turned out that the palace was hidden in the mountain.

Then the two teams gathered their men

They set out to find the treasure

Before the careful Chen Yulou set off

Will first go to explore the road

But today it was late and raining heavily

Chen Yulou was worried that the Zhang Qi in the mountain would turn into water.

Tomorrow and then go into the mountains to find treasure

The village is, to put it bluntly

Inside the long-term storage of a body named Rats Ergu

of the dried corpse to guard the place

That night Chen Yulou had a nightmare

He dreamed that Ratsy came back to life

Gnawing on their roast chicken in the corner

He was worried that something strange would happen

He suddenly looked up and saw a cloaked

He saw a pale monster standing on the beam of the house.

And then he blinked

And it turned into a portrait

At that moment, a black cat took away the treasure map

Chased all the way to a mass grave

The black cat inexplicably crashed to death on a monument

After that, Chen Yulou carefully went up to

Just as he turned to leave

A strange laughter came from behind him

In the mist appeared a

A monster on a white horse

At that moment, Chen Yulou's body suddenly did not obey

He could not move in the same place

Only to see the monster

stretched out its hand for tens of meters

Chen Yulou was about to fall here

At the moment of a thousand hooks

They saw them rotating the vajra umbrella

A golden light made the monster show its original form

Walked in to see

Save Chen Yulou after a few words and then left

The next day they arrived at the foot of Bottle Mountain

They sprinkled quicklime on the cliff

Tied up a ladder

Then the poisonous miasma dispersed

Chen Yulou went down with the crowd

At the bottom of the valley

And Luo Laoquan didn't care about that.

He wanted to get the treasure

It didn't take long to dig up a

Chen Yulou recognized at once

It was not a watermelon

It was a northern melon, also known as a corpse's head.

Because the deceased's mind was too deep

And buried in the ground for a long time

That's why it looks so strange

At that moment, the melon suddenly shook violently

It fell to the ground and broke in half

A red centipede crawled out of it

Luo Laoquan wanted to trample it to death with one foot

But the centipede not only can not be trampled to death

And the ground also began to shake

Then crawled out of the hole just dug

Countless centipedes in a dense

And the speed was extremely fast

Within a short time crawled all over the body

They were killed instantly

The crowd saw this and immediately shot at them

They had to turn around and run away

At that moment, the Partridge Whistle, who had infiltrated the crowd

Took out the red powder in the box

Sprinkled in front of the

Successfully blocked the group of centipedes

Finally, only half of the men survived

The crowd climbed back to the cliff to reorganize

Didn't you say you weren't coming?

Why are you still sneaking around and following them?

I can help you enter the tomb

But I just want one of the things

that all things are mutually exclusive

To cure the centipede is also very simple

Just catch all the chickens in town

Luo Laoquan ordered his men to come to the town of Golden Chicken.

He grabbed all the chickens in the town

And really found a one in a hundred

A poisonous nemesis - the Angry Chicken

Legend has it that when a chicken cries, all poisons will be defeated

This underground centipede can be cured

Then everyone came to the cliff again

The group of red centipedes before

The chicken ate almost all of them

As soon as they entered, they were blinded by the gold and silver treasures in the cave

A stone door with a Tai Chi pattern

After entering the tomb, he found that in the middle of the tomb

There was a coffin made of gold

Luo Laoquan rushed over and hugged it

After opening the coffin

Inside the coffin is full of blood taiyang flesh gangs

The partridge whistle said that this meat ganoderma was very valuable

Use it to make pills, it may really prolong life

Luo Laoquan was more excited when he heard that

Quickly asked his men to move such treasures back

At that moment, a centipede that had become an essence

leapt out of the coffin

Only then did Chen Yulou realize

Everything here is a trap left by the ancestors

But they simply do not eat this set

At this moment, the outside mechanism began to turn

The only exit was also closed

Luo Laoquan was knocked out by the centipede spirit

The Red Lady was also injured trying to save Chen Yulou

Chen Yulou, who was dazed by the Centipede Spirit

fell into the well behind him

The Red Queen in order to pull him

In the nick of time

At that moment, the Centipede Spirit swung his tail

They all fell in

Hundreds of people finally left the three of them alive

The centipede spirit chased them down again

Following the passage they arrived at the real Dandu Immortal Palace

but found that everything here was upside down

In fact, it was not the tomb that was upside down

It was the three of them

Because of a meteorite that changed the gravitational force

left them hanging in mid-air

At that moment, the compass in front of them began to turn

Partridge Whistle also slowly solved the riddle of the elixir

Then they saw the dried corpse next to the coffin

The glittering body is the inner elixir formed after death

Suddenly Luo Laoquan appeared in front of them

So he was not dead

And he had fooled everyone by playing dumb before

He knew the identity of Partridge Whistle

The treasure map was not a chance acquisition

But he stole it from his master

For this reason, he also killed his own sister

That is, Partridge Whistle's girl friend

When Partridge Whistle saw that Luo Laoquan was still alive

He went up and fought with Luo Laoquan

But Luo Laoquan was not willing

Hold it in the palm of his hand

He thought he would be immortal

But the elixir didn't save him

But it sucked the essence out of his body

Turned him into an old man in his old age

In the end, Partridge Whistle kicked the meteorite that maintained the balance of the underground palace

Then the whole chamber began to collapse

The three of them also fell down

I thought they would die together

But they fell from the waterfall

They fell into a pool of water

The three survived to get out of here

With the collapse of the tomb

In fact, I feel that we modern people also have inner pellets

But the doctors call it a stone...

This article was published by the #author at #Time on the #website name, if in doubt, please contact us.
本文链接：https://www.toomic.com/movie/150.html