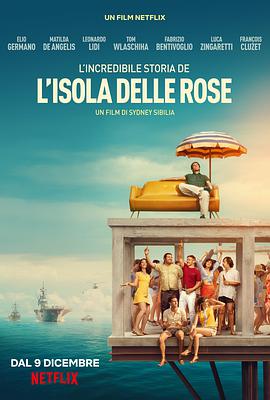 You may not believe it

It's only 400 square meters

No platform as big as a basketball court

This is a country

Don't look at its small size

But they have restaurants and bars

This is the smallest country in history

The Republic of the Isle of Roses

It is located on the high seas near Italy

The president's name was Joben Rosa

He is an engineer

In his spare time, he likes to develop some rather strange things

The cars he takes out for a ride with his girlfriend

All built by himself

As a result, there was no license plate

Halfway there, he was stopped by a police car

So he was asked to show his driver's license

But this car is handmade

How can it have a certificate

Once the traffic cop heard that, he would impound the car

Joe Ben made all kinds of excuses

But to no avail

He tried to resist and take back the car

He was soon subdued by the traffic police

and charged with obstructing official business

The girlfriend was also implicated in the case

Affected her career promotion in the future

But Joe Ben did not think so

His girlfriend was angry at him

He was living in his own world all day long

She didn't care about other people's feelings

Although the current world is not my own

But I can build one ah

But how to build it

Until a few months later

This day Joben as a volunteer

I saw a billboard by accident.

My Platform, Your Freedom

At that moment, a thought occurred to Joe Ben

The high seas are not under the jurisdiction of any country.

Wouldn't it be better to build a country there?

So smoothly he lost the championship

With that in mind

Discuss how to build a country on the high seas

They first visited the site

A platform can be built on the water

Underwater need to use steel pipes as the foundation

This is transported back and forth to the high seas

Not to mention the cost of materials

They can't even pay for the freight alone

This can not be difficult for him

He turned to experiment

He could make a hollow structure out of steel pipe

Not only was it cheaper to build

It could float on the sea and be easily transported.

When the destination is reached, then open the cover of the steel pipe

Let the sea water into the steel tube

Then it will sink to the bottom of the sea

All plans are ready

It's time to start building a country

Build a country on the sea

What do you need to do?

You first have to pull the pipe to the open sea

Then climb to one end and open the lid

So that it can sink to the bottom of the water

The prototype of Rose Island is born

There is a lack of living resources here.

So they used a drill to dig fresh water from the bottom of the sea.

Looking at their territory.

Joben seemed to smell the smell of freedom.

And then a marine patrol comes along.

This is an independent country, brother.

It's not your business.

Well, good luck with that.

He decided to stay here for the first night.

Look at the sea with the sea breeze.

Lying on a chair with a cup of coffee

It was a great time.

But the sky is unpredictable

One minute the moon was shining in the sky

The next moment there is a sudden rainstorm

The only sunshade was blown away

The good thing is that the platform is strong enough

Let the sea lap wildly, but also do not move

There was a cry for help from the sea

It turned out to be a sea drifter

Because of the heavy rain lost direction

Qiaoben saw the situation and waved his hands

to come up for refuge

From that day on

He became the first resident of Rose Island

It so happened that he was a welder.

Within a few days, he was helping to build a house on Rose Island.

With the first inhabitant

And soon there was a second

This man was a publicist

He had been expelled from the country for his crimes

Now he came to Rose Island

He played to his strengths

Not only did he give the island its name

And put up a sign in the Italian port

A sailing route to the island was opened

The inhabitants of the neighborhood were curious about this new country

They came to visit and vacation.

The Island of Roses was immediately crowded with people

There were even long lines on the sea

As the number of tourists grew

A beautiful woman wanted to move into Rose Island

So she volunteered to be a bartender

Soon Joe Ben was making a lot of money

And the country was his.

The money was not taxable

But it didn't take long for the accident to happen

It was the smallest country in the world.

Located on the high seas off Italy.

It's about 400 square meters in size

When the newspaper was published

Many tourists have come to visit

To get a glimpse of the Republic of Rose Island

But in the eyes of President Joben's ex-girlfriend

This is a resort

It's not even an independent country.

That was an instant wake-up call for Joben.

So he set up a government that night.

Put himself in the presidency.

Submitted an application for statehood to the United Nations

Not only did the UN not reject it

The Italian government was notified.

Only 11 kilometers of sea

This made Italy very nervous

to find out what was going on.

Who would have thought that these two investigators

felt the freedom of the Rose Island

They decided to stay for a long time

Through the media quickly issued a speech

Refusing to recognize Rose Island as an independent country

Who knew that this action

Not only did it not put Rose Island in crisis

It also ran a wave of free advertising

Now the whole world knows about it

Thousands of people have sent emails

Wanting to be a part of Rose Island

The Italian government saw that this was not working

So they sent someone to negotiate again

Tell him to disband Rose Island.

The money he was given would last a lifetime

He built this country for freedom

Seeing that he would not take the soft option

So he took the hard way

Joben's father was forced into retirement by the government.

Bribing his residents with high prices

Joben knew about it

So there were only a few people left on Rose Island

Working together to defend the country

They held hands and confronted the warship

Even when they were warned by shells.

They wouldn't back down.

The Italian government saw this.

Had to send troops to forcibly move them

Finally, Rose Island was hit by a barrage of gunfire

Sinking forever into the sea

But it was also the first time Italy had so far

To launch the only war of aggression

It was based on true events

Although the Isle of Roses only existed for two short years.

But it was a symbol of freedom

Even though it was destroyed by power

It is already in the history

And in the blood of all those who believe in freedom

This article was published by the #author at #Time on the #website name, if in doubt, please contact us.
本文链接：https://www.toomic.com/movie/162.html