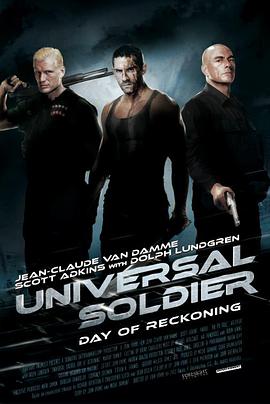 Today we have a film

together with three great action stars

The Reckoning 4: Day of Reckoning

One day in John's home

One of them didn't say anything.

Take a stove hook on his head.

The men in black grabbed his wife and daughter again.

John was afraid and begged.

One of them comes up to him and

Takes off his helmet.

A bald old light flashed in front of him.

Then the man draws his gun.

Shot his wife in front of John.

Just as he was about to do something to his daughter.

It turns out that after this incident

John did not die

But was in a coma in the hospital for nine months.

The nurse sister was exhausted.

wanted to ask about the cause of the incident.

But the memory before the accident

John said he could not remember

And Neil saw him nodding his head all the time

So he did not ask more than handed him a photo

John took it and looked at it

Then he gritted his teeth and said

This is the guy who did it

Neil said his name was Luke.

Used to be a tough soldier.

Now he's a wanted man who betrayed his country.

Meanwhile, a plumber on the job.

Suddenly, his brain felt like it had been activated.

It was as if something was activated.

He came to a small hotel

He shot the old lady at the door with one shot

Then he took out a spray gun from his backpack

He started to kill here

And his ultimate target was this white man.

He took advantage of the situation

The bearded man was no match for this man

He was knocked down after a blow to the liver murumuru

After the strong man picked up a tube of injection

Backhandedly to the bearded man stabbed a needle

After the bearded man was hit

From now on you have your own mind

No longer be a slave of the government you are free

The bearded man's eyes were dazed after hearing this

The man in front of him also in a continuous flash

Became the appearance of bald Luke

Deeply engraved in his mind

The strong man's name was Andrew

With a group of formerly manipulated men

Formed an armed opposition to the government and planned a revolution

Trying to overthrow the ruler who enslaved them

John, who woke up here

After a period of recovery, he was discharged from the hospital

back to his home

He was in pain.

The next day John received a phone call.

The caller said it was his friend Brandon.

He wanted to tell him something very important in person.

Although John didn't know anyone now.

But he was ready to go there anyway.

He drove to the address the man gave him

The house was a mess.

There was blood everywhere.

He went into the bedroom and saw

A man who had been beaten beyond recognition

He saw a man who had been beaten to death.

John was a little confused as to what was going on.

But then he saw a note on the table

He saw a note with his name on it.

According to the address on the note, John went to a bar

But before he could ask any questions.

The girl was abducted by an older man

but was attacked by the bearded man

He gave him a shot in the neck

But this invincible brainwashing drug

Seems to have no effect on the hatred of John's bones

Just as he was about to strike at the bearded man.

Security arrived and threw him out.

To find out what was going on.

John took advantage of the dancer, Jade, who was off duty.

And dragged her into the house.

He wielded a big axe

He came at John with a big axe and screamed

John, who was recovering from a serious illness

He was no match for him

He was beaten and scattered

Fortunately, at the critical moment, Xiao Cui made a move

John also took the opportunity to cut him with an axe

Then dragged Xiao Cui is turn and run

The two of them drove to a small hotel

While telling the story of their acquaintance

But John still did not remember even a little

He contacted Neil and told him about all the strange things that had happened to him since his release from the hospital.

Neil said that Luke had a mind-control drug.

The drug would make the victim do his bidding unconditionally.

But then Neil reassured John.

He said that recently, they've been monitoring the docks.

They've basically got a handle on Luke's movements.

I believe he will be brought to justice soon.

The revenge of his wife and daughter is a great one.

John didn't want Luke to fall into the hands of others.

So he went to the docks early the next morning.

He met Reid, the man in charge here.

Reid's face looked as if he'd been licked by a blind bear.

He said it was all because of John. John didn't understand.

Then Reid showed him a video.

It showed a man in black beating Brandon like crazy.

John didn't know what he was doing with this thing.

But when the man turned around.

John saw his own face

He was completely baffled by this

In the car, John felt that he was now very unsafe

So he asked Xiao Cui

Can you still remember where it is?

Xiao Cui said she could almost find it

Oh, except for the bearded man who can do this

To say that this person is really persistent

He was determined to get him to the fart

But after all, the bearded man has a gun in his hand and not panic

He seized the opportunity

A shot to John's car track auxiliary to blow up

And then hit the gas pedal a crash

After getting out of the car, the two continued to sulfur

To be precise, John continued to be beaten by the bearded man

With his bare hands John could not do him

Armed with weapons is not a match for the bearded man

You can't bully people can not bully one ah

To a different person ah

But as he fought, John seemed to get the hang of it.

Until after a flying end

He finally recalled the once mastered

All the fighting skills

Then John rushed forward to eliminate and hit

He gave the bearded man a series of moves

Then he picked up the baseball bat on the ground

and grabbed him by the head

Afterwards, John grabbed a car and went with Xiao Cui to the cabin in the woods that she said.

But just as they were cautiously walking inside

suddenly appeared in front of them

When the man saw John

He didn't show much shock.

His eyes looked at Xiao Cui with affection

And Xiao Cui also found out at this time

Her portrait was everywhere in this small rundown house

He was the one who met her in the beginning

Then, during the conversation with him

It turns out that this person was created by the government

But in turn, he was recruited by Luke with a potion

Since then, under Luke's orders, he killed many people

Brandon is one of them

Until one day he fell in love with Xiao Cui

Only then did he realize that he was just Luke's slave

So he left Luke.

So he left Luke and hid in this small rundown house and lived a decadent life.

And John heard this also understand

So he was created

To take over his task of killing Luke

But the memories of his wife and daughter

In John's mind is so real

He couldn't accept the truth.

This guy said, "Cloned sheep don't have a mother or a father."

You've never heard of that?

He suggested that John go to Luke.

He said he was the only one who could help you get rid of this painful memory.

And then this guy goes crazy for some reason.

He wanted to give Jade a shot.

He went to the river by himself.

Little did he know that Luke had sent someone to pick him up.

And so John took the boat deep into the jungle.

And after a long journey.

Finally, he arrived at Luke's secret underground base.

On a simple operating table.

You are a newborn not more than three weeks old.

How can I be this big and only three weeks old?

And how do you explain my daughter-in-law and child?

The old man said you were created in a government lab where I used to work.

You were created as a murder weapon in the government lab where I used to work.

You never had a family.

They were artificially instilled through implant technology.

He said he could help free you from your painful memories.

Drilled out a hole in his skull

John, who was in great pain

At this time, he was very reluctant to let go of the memory of his wife and daughter in his head

He did not want to forget it all

He broke free from his bindings and rushed out

And then John went crazy.

He started killing people all over the base.

But anyone he saw

No one could escape his cruelty.

Soon he was in a weapons store

He encountered Andrew, a small boss.

The big Andrew used his strength to his advantage

He threw John away

And then rushed up and kicked him

John did not dare to hesitate

Quickly pick up the dagger on the ground

And he fought with him

In the narrow environment there is no advantage to say

After a few moments, John killed him with a single slash

Luke, for some reason

He had the look of a flat-headed man

Seems to be telling John

Life or death is not important, we will do it

Luke after dodging this blow

After dodging the blow, Luke took the subsequent slash

Backhand is a side kick

The next part of the fight between the two

It can be said that the fist to flesh knife blood

The fight that is called a match

But even the most powerful people have a day of fart

Luke understood that even if he could kill John now

There will be another John in front of him

He was tired of this life long ago.

So he gave up the fight.

The movie ends with John meeting with Neal.

This will create his family.

And replaced them with clones.

Impressively, he has become

the new boss of this group of almighty warriors

The movie of this series proceeds to the fourth part.

With the aging of Shankleton and Duffy Longer

Is it necessary to make a fifth film?

This article was published by the #author at #Time on the #website name, if in doubt, please contact us.
本文链接：https://www.toomic.com/movie/167.html