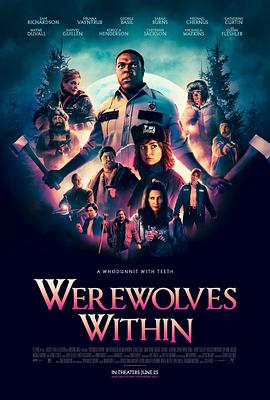 Otherwise you will be captured by the werewolf

This is not just a legend

Today, for example, someone was chased away by something.

U.S. Forest Service rangers were ordered to the town.

To investigate illegal fishing in the area.

There's a cafe and hotel in town where the mayor is the mayor of the village.

He wants to build a factory in the mountains with a gas pipeline.

It will seriously affect the ecological balance

The village is divided into two factions

Next door is a postwoman who is also new to the village.

She knows the location of the local illegal fishermen.

So she took the ranger there to check it out.

The two of them went to the Tso's house

On the way, they chatted about the place.

The postal worker was going to stay here for two days and then transfer back to the city.

But the village chief wouldn't let her stay.

There's the flirtatious repairman and his wife

The artists who have been making syrup for generations

She also has a husband and a dog

I didn't know I was near the Tsutomu family, who live in the mountains.

Basically they don't interact with the village people

The ranger explained that someone reported you for illegal fishing.

What's wrong? Is there a problem?

Nothing. I was just curious.

The ranger left in embarrassment

And that's where the weirdness began.

That night there was a blizzard that crushed the village's communication devices.

The next day a scream woke everyone up

The artist's dog was dead and bloody.

There was a Dr. Melies in the village, a zoologist and botanist.

She was the one who reported the illegal fishing.

As the most educated person in the village, she was responsible for studying the death of the dog.

Then the forest rangers found the whole village snowed in.

And the electrical circuit was damaged.

The ranger also saw a paw print on the generator.

What kind of hands could outline such a sinister wound?

The rangers saw scratches in many parts of the village.

And through these claw marks, they found a body.

It was the village chief's husband. The body was torn out of shape and only half of it was left.

It looked like a wild animal had done it.

The doctor came out to photograph the body

And found a suspicious hair on it.

Now everyone is in danger, the ranger suggested

to go to the mountains and ask the cottagers to come down and hunt.

But the question is who will go?

So two people can get to the hunter's house without any problem.

The task is completed by the ranger and the mailman

When they arrive at the hunter's house, his hands are covered with blood.

And the mailman and the ranger were in the hunter's room.

They saw the dog's leash, and it seemed that the hunter was the man-eating monster.

On the other hand, the doctor's research found

The hair found on the two victims

They were not human. They were canine.

But no match could be found.

That night, the hotel was sealed off to prevent the hunters from entering.

But the danger was still there.

In the middle of the night, the artist's husband was chased away by something.

When the crowd heard the screams, the woman repairman was there.

She fired several shots and hit the artist's husband.

The beast was scared away

It's a good thing the mechanic's gun wasn't so good.

The artist's husband was not killed, but one of his hands was eaten.

People do not understand how this thing came in?

The doors and windows were intact.

Some speculate who said he was outside?

Maybe the man-eating beast is among us.

The people went to ask the doctor, who now had an answer.

She didn't let anyone into her room.

She guessed that the killer was not a hunter but a werewolf.

Disguised as an ordinary person to blend in with them

She's been drinking, hasn't she?

The gas company president broke in through the back door and unlocked it.

A physical altercation broke out and gunshots were fired.

said the doctor had shot herself

But why did she shoot herself?

Everyone locked their suspicions on the gas company boss

No one dared to rest alone at night

We sat together to discuss werewolves

There were local werewolf legends, but they were all about scaring children.

The recipient came forward and said

They have a legend of the seventh child in Argentina

Whenever a family has a seventh child born, they will be killed

Because that is a werewolf

The room suddenly fell into suspicion and saber rattling

The mechanics said that the artist was a werewolf.

Because four years ago the tinkerers and the artist's husband had an affair.

Another person said that the village chief has a problem

The mayor was crying who knows how he died?

And you do not suspect the gas company boss?

He said Dr. Self-death but who can prove it?

So you're saying the ranger and the mailman are new too.

The argument intensifies and the ranger picks up a teapot and smashes the glass.

Yes, but why are you smashing my house?

In the end, we do not trust each other to go back to the house separately

No accident should be an accident at night screaming

The ranger went to look upstairs and met the mailman

These are two large murders.

And there was a knife full of diesel fuel here

Is the gas company boss a psychopathic murderer?

But they ran into something that caused them to get separated

The attacker was stolen and turned around to see the artist

She chanted the gas company must be developed

After the subject and the ranger they rendezvous

He was heavily armed and let the wolves out

It seems to be crazy

The rangers tried to find other living people

They came to the artist's house

But they saw the repairman's husband here.

He was always crazy and in pain.

Now he wanted to steal something from the artist's room in the guise of a werewolf.

The repairman's husband ran out of the room when he saw what had happened.

Guys, get in the car and let's get out of here.

The artist arrives behind him and shoots the mechanic in the head.

The artist comes back to the house through the back door and pulls a gun on some people.

He asked them why they had infiltrated his house.

Are they trying to stop my craft store from being established?

By now the husband was dead

And the victim attacked the artist and knocked him around 90 degrees.

The artist fell head first into the fireplace

We are not werewolves, why are you blocking us?

It doesn't matter if we are werewolves or not

So she was treated as a werewolf by the boss

You used to obstruct the boss from opening the factory, and I was a thorn in his side

My arrival made it more difficult to build his factory.

So he wanted to kill the three of us

But then Suffer suddenly rebelled.

He put a gun to the postman's head

The ranger said that the mailman was the seventh child in the family.

Acceptance also thought that the mailman was a werewolf.

Do not believe the rumor, brother

The next moment the gas company boss shot

A tranquilizer bullet knocked him out.

The mailman got out of the car and was ready to start.

But the car just wouldn't start.

He had been investigating two cases.

The murder of four members of the Townsend family and the murder of several college students in a grout pond.

The rangers were around for both cases.

Then the ranger came here and something started to happen here.

The boss found it in the ranger's room.

Then the fainting sufferer woke up

The ranger and the mailman have developed a strong relationship

We agreed to have sex together after the injury

But no, we still don't know who the werewolf is!

At this point the ranger saw the mailman's workroom

There were newspaper clippings of homicides all over the place.

There was also the postman's ID on the table

It was clearly a man.

Then the postman, a woman...

The postman also came out and admitted that she was the werewolf.

She killed the postman to get a proper identity.

She used to commit crimes in the wild

For example, the cases mentioned earlier were all her work

Later, she came to this village and the villagers were in conflict with each other

And each selfish and greedy praise

Directly eat without anyone suspecting themselves

She found the dog collar in Tso's house, which she put there.

Then she put the diesel-stained knife in the ranger's room

She also did it to divert suspicion

Now the mailman thinks the ranger is not bad.

Ready to turn him into a werewolf too

The mailman started to transform into a real werewolf in just a few seconds.

Suddenly he was hit by a shovel.

So now he changed his face to save the villagers

Don't worry, I kill more than 600 of these things a year

The ranger rushed up to fight together in blood

Finally, he managed to kill the werewolf with a tennis racket

This article was published by the #author at #Time on the #website name, if in doubt, please contact us.
本文链接：https://www.toomic.com/movie/180.html