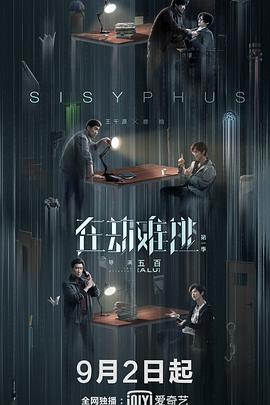 Luhan as a psycho killer

Do you dare to watch it?

Recently, a new drama has caused a lot of buzz among netizens

Coincidentally, in this drama, Lu Han

There is also the episode of pushing someone down the mountain

Isn't this the young version of Zhang Dongsheng?

They both like to push people down the mountain

But after watching a few episodes, I realized

This character is much more ruthless than Zhang Dongsheng

This drama is called "Inevitable Escape

At the beginning of the story, in a shabby rice noodle store

A black customer in the store acts strangely

After eating the powder, he put glue on his fingers

Anyone familiar with crime movies knows this

This was an operation to cover up fingerprints

The owner smoked a cigarette outside

A woman was attacked from behind by the man in black

The action was clean and crisp, and the knife sealed her throat

Then the killer dropped a burning paper crane

On the other side, in front of a watch store called Five Fingers

The owner of the river noodle store took off his watch

He touched it with affection.

It was a child's watch.

A child's watch with a broken dial

The owner is Wang Limin, a former criminal police officer

His daughter Doduo accidentally fell off a cliff and died

His wife could never get out

She filed for divorce, and his wife was torn apart

From then on, Wang Limin spent his days in a muddle

Took the initiative to apply to the bureau for suspension

He decided to take a break

But trouble still came to him.

The murder in the parking lot last night.

Someone came forward to the police station to give himself up.

He said his name was Fu Jiliang.

He confessed to the crime voluntarily.

He gave details of the crime.

Including the knife that was used as the murder weapon.

But halfway through the story

He did not want to go on

He asked Wang Limin by name to reappear.

（"Tell him to come and ask me questions)

（"I have nothing to say)

But he didn't even know the suspect in front of him.

The two sat in the interrogation room and looked at each other.

The suspect began to foretell the next murder without moving.

Someone else would die.

Turned around and wanted to leave

The suspect across the street did not panic at all

Instead, he asked a strange question

Knowing that it was after twelve o'clock

The suspect changed his face as if he had multiple personalities.

He suddenly retracted his confession.

The murderer coerced him into saying what he had just said.

Then he said something that made Wang Limin explode on the spot.

（"It wasn't just an accident)

(How is it not an accident?)

The police first followed the address revealed by the suspect.

They found the next murder scene.

Sure enough, there was a second victim.

And the name on his ID card was actually Fu Jiliang.

If he is Fu Gilang

Then who is the one in the police station?

Fake Fu Jiliang was suddenly sent to the hospital foaming at the mouth.

In fact, this is his design

This is to escape the rhythm

But he received a call from the killer

His ex-wife was tied up on the roof of the Peace Building.

The killer said his real name was Pan Abin

And gave him a problem

The elevator of the building was filled with explosives

It was filled with arriving police officers

In one minute, wife or colleague

Wang Limin had to choose one

This Pan Ah Bin is the Gotham City Joker in disguise?

However, before Wang Limin could make a choice

What happened next was beyond everyone's expectation

In the first episode, all received a box of rice

How can this play next

I know the plot is certainly not simple

Wang Limin, who had just been shot by Pan Ah Bin, suddenly woke up

She was still in the humble noodle store before

Could it be that what just happened was all a dream?

Then if it was a dream

Why is everything so real?

Why does the scene in front of him look familiar?

He walked into the kitchen in a trance

He turned his head suddenly

He seemed to have traveled back in time before the crime

At the same time he also realized

The murder was happening in the parking lot right now

Wang Limin rushed to the scene of the crime

But he was still a step too late

From the body temperature of the victim, it was easy to deduce

Wang Limin turned around and ran out of the parking lot

He saw a familiar back

After killing someone, he could still leave so calmly

Seems to be waiting for the other side to follow

But Wang Limin still lost him

Had to return to the scene of the crime

At this time, the police had already completed the initial search

As a result, they took Wang Limin as the number one suspect

She believed that Zhang would not kill anyone.

But she felt that there was something abnormal

This made the subordinate also have a slight wavering

(You are not crazy)

(Is the knife yours?)

(The knife is mine)

The professor that Pan Abin impersonated before

There was someone in the room

After waking up, Fu Jiliang found himself in the sewer

A bomb was strapped to his body.

He couldn't answer the call of the day or the ground.

A camera was pointed at him from a distance.

The footage of Fu Jiliang being trapped

was transmitted to the police computer in real time.

A recording of the killer was also sent.

(Now you have one hour)

（"As long as he arrives within an hour.)

Why does the killer have to be at

To complete a pre-publicized killing ritual

Zhao Min had no choice but to bring Wang Limin here

The surveillance video of the parking lot

Wang Limin checked the information on the computer with great vigor

Pan Abin was coming for him

Although the exact reason is not clear

But he believed he could stop it

But there was not much time left

Site search is no longer possible

Can only be taken to the open detonation

Just in the nick of time

Wang Limin successfully detonated the bomb in the river

But the danger didn't go far.

His ex-wife Qiao Xin did not accept his

But soon after the car started

A dark figure in the back seat slowly got up

Wang Limin who slept overnight in the police station

Go out for breakfast

Not long after someone carrying a bowl of wontons

Sitting next to him

It was no other person

It was the man Wang Limin was chasing, Pan Ah Bin

(Believe it or not, I'll arrest you)

The calm and relaxed Pan Abin was obviously prepared

Wang Limin picked it up and looked at it

Pan Abin used this as leverage

He made a deal with Wang Limin

He told him to bring out Fu Jiliang, who was under police protection.

Faced with the threat

Wang Limin planned to take advantage of the situation

He took Fu Jiliang to the place designated by Pan Ah Bin.

Officer Zhao Min followed him in his car

They arrived at the Peace Building again.

Before carrying out the final killings

He threw out a kitchen knife

He threatened Wang Limin to kill Fu Jiliang in front of him.

How can a police officer kill someone so easily?

But Wang Limin did not hesitate

He slowly walked towards the terrified Fu Jiliang

Wang Limin was one step ahead again

It turned out that the death of Duoduo two years ago

Duoduo panicked and ran before falling off the cliff

Why does he keep haunting him?

You can make it the last mystery in your life

All the thrills and chills

It seems that with Wang Limin's brains and determination, he managed to turn the danger into peace

The hanging heart finally fell to the ground

Wang Limin gently took his ex-wife to the ambulance

But before he left, he was called by Zhao Min

She said that Pan Abin wanted to see him by name

The two arrived in the ambulance

Pan Abin was handcuffed to the hospital bed and said calmly

Do you think I can still kill you this time?

Wang Limin asked back with a disdainful face

Can you kill me again?

Then Pan Abin said one word without expression

If you thought this was an ordinary crime thriller before

A few minutes later, you'll be smacked in the face

The setting of "In Case of Escape" is quite emotional

Including time travel and time reset

We travel through different time periods

The story is told layer by layer, which makes people confused

But at the same time, it also leaves a lot of doubts

What is the relationship between Pan Abin and Wang Limin?

What are the reasons and trigger conditions for time travel?

Why did Pan Abin kill and leave the paper crane

This paper crane not only appears in the drama

It is also hidden in the title and poster.

Including what will happen the next time you die

The main character with his precognitive ability

Thought to stop the crime from happening

But falls deeper into the swamp of time

Does he have a chance?

If he starts over

The title of "Inevitable

and the powerlessness of people to seek truth and salvation in the face of time.

The English version of the title is even more interesting

That will never stop

The tragic mythological figure pushes the same boulder up the mountain

It is used as a metaphor for the protagonist

There is no way back and no way out

Predicting what will happen

This is the end of today's story

This article was published by the #author at #Time on the #website name, if in doubt, please contact us.
本文链接：https://www.toomic.com/movie/186.html