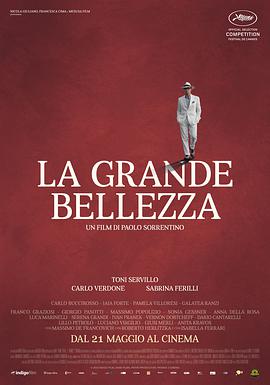 If the meaning of life is to realize a beautiful moment

then does life after this moment have meaning?

The first act of the movie starts with a cannon.

Next is the atmosphere of the Roman landscape.

A beautiful choral soundtrack with a Japanese speaking guide

Bells echoing over the monument.

Tourists gather around the fountain.

A tourist is admiring the beautiful scenery.

After a contented smile, his life comes to an abrupt end

From the very beginning of the movie

The air of high society will fill your vision.

Jep is the promoter of this party.

He was the birthday boy for the night.

And he's already achieved his wish.

After a night of hangovers

Jep stopped by the garden pond

Lost in the laughter of the little girls in the convent

The only thing that kept his life in flux today

is the sea that he sees when he looks at the ceiling.

Forty years ago on that sea

He met the love of his life, Eliza.

From the moment he saw Eliza

Everything he did from then on was an extension of that new trajectory.

It won the prestigious literary award of the year.

And he became famous for it.

But after that, he never wrote anything else.

He worked for a high-end magazine whose clients were the rich and famous.

He's talking about how he resonates with the world.

Japp wanted to know what resonance was.

What do you mean by vibration?

How can I describe vibration to you in vulgar terms?

describe vibration to you?

I'm an artist. I don't need to explain shit.

He's in love with an actress who uses him as a driver.

He's not even a spare tire.

In her mind, the man who came to Rome 40 years ago to pursue his dream

In her mind, this man who has been in Rome for 40 years and still lives in a student apartment is a loser.

Romain is always trying to find a way to prepare a theater production.

Although Jep likes to make fun of his friend's understanding of the art of theater.

But he helped him in any way he could.

Through his connections, he was able to secure a three-day slot at the theater.

Unfortunately, his goddess refused to play

After the first time he met her

Jep quietly left while the girl friend was getting her computer

Jep suddenly realizes that a purely materialistic life is so boring

He felt he could no longer do things he didn't like.

He walks from Navona Square at night

He walks from Navona Square at night to the Tiber River in the early morning.

He liked to walk alone in the city

Watching the flow of everything

He looks back on his arrival in Rome 40 years ago with the dream of entering high society.

And he succeeded in that.

But it seems he is trapped again.

In the endless parties

With the false boasting of the so-called high society

One day on his way home

The hero runs into an old man waiting at the door

The love of Jep's life, Eliza, has died.

The old man is Eliza's husband.

He found Jep through his late wife's diary

But her heart had always been in Jep's body

The diary is all about her and Jep's young life

Her husband was just a "good companion" in her writing.

Jep thinks of his first love Eliza late at night

And dreamed that he was on top of his life, but he was nothing.

The strange woman's child is nowhere to be found.

The little one is hiding in the bottom of the temple

looked up and asked Jaap

He also wants to know who he is.

Where he came from and where he's going

A female novelist complained about the numbness of people's lives.

She was boasting about how serious and noble she was.

There was a lot of embarrassment.

Japp told her to stop talking.

We all know what you're about.

The novelist was still trying to argue her case.

Jep had to expose the truth under her many examples

We're all just wasting our time together.

Instead of mocking us, you should share our feelings.

The novelist, who had been so proud of herself, was speechless.

She got up and left the room in anger.

Jep wandered through the streets of Rome.

He saw all kinds of despair and uncertainty

Until he meets Ramona, who is still stripping in her middle age.

Ramona is the daughter of a club owner.

But she insists on dancing to earn a living.

Inside her extremely sexy body

The club owner doesn't understand why his daughter is so short of money.

She was unlike anyone in high society that Jaap knew.

The next day, Jep arrives at Ramona's house.

Hoping to become friends with each other.

The kind of friends that are not sexual and pure.

They meet the duchess's son at lunch.

He had even painted his body red before.

He had a long beard and unruly hair, but his eyes shone brightly.

What will you do when death comes to your door tonight?

Ramona listened to the man's question with unease

Jep told him not to think so much

Some things are too complicated for us to understand

Survival is accidental but death is inevitable.

Cruelly demanding that the child paint despite her howls and wails.

Watching her slam paint onto the canvas

The whole room sighs at the tragedy of the child

Without any hope for the "fate" of the huge canvas

Instead, the girl transformed it into a starry sky with her bare hands

Jep, with the help of his best friend, showed Ramona the most beautiful buildings of Rome

and the most precious works of art

Ramona smiled for the first time

Happy as a child.

The time seemed so much more alive

While they were lingering in the beautiful garden.

The duchess' son was accelerating and closing his eyes to suicide

Before preparing for the funeral

Jep preached to Ramona his theory of acting

How to show sadness without overwhelming the family

At the funeral, Japp practiced his theory perfectly.

He warmed the duchess with a gentle whisper

Afterwards, he stood in a corner where everyone could see him and showed his sadness.

But as everyone carried the coffin away together

Jep felt the burden of death that he would eventually face

He cried with real sorrow.

Ramona finally revealed a secret she had never told anyone.

All the money she had earned had been spent on medical care.

Her life was about to go down to zero.

That's why she felt uneasy about death.

Only the seagulls and the waves sang lazily.

Ramona's life died with the song.

The duchess had lost her last relative.

She was left alone with her large mansion.

She sold the family fortune and went to Africa as a volunteer.

August is ending without rain

September has not yet begun

I am so ordinary

To the applause of Romain, who had fulfilled a long-held dream

His beloved actress left the stage without a backward glance

Jep walks in the baths of Caracalla

There was a giraffe here.

It's his magician friend's final rehearsal for the giraffe's disappearance tomorrow.

There is no way to find support for survival

The burden of death cannot be avoided

Then the search for the nothingness of death becomes the last request.

Then let me disappear too.

Jep, do you think if I could really make people disappear?

Would I still be doing this trick at my age?

It's just a trick.

He's fulfilling his dream and losing his love.

The only person Roman could say goodbye to was Jep.

When he turned around again the giraffe was gone

Unfortunately, it was just a trick.

He wanted to read Eliza's diary.

Only to be told that the diary had been discarded.

And the man is ready for a night of drinks with his new girlfriend.

Jep knows that all the strings in his life are broken.

He had lost interest in the party that was just around the corner.

He says to the woman

This is what my life has become.

Emptiness became the inescapable conclusion of his life.

He saw the wall of pictures on his friend's estate.

At first, the man's father took his picture.

Until the old man died and he took pictures of himself.

It was like watching a long river flowing through his past.

Jep burst into tears for a while

One day the lady boss told the man

There is a highly respected senior nun

She was coming to Rome to receive an honor.

She had read the book you had written and loved it.

The two decide to arrange a reception and interview with the nun at the man's house.

Her assistant was talking incessantly.

Explaining that the purpose of the nun's visit

To climb the steps of St. John's Cathedral on both knees.

At 104, she insists on sleeping on the floor.

In contemporary parlance, she has become a laughing stock.

In the morning light, the balcony is filled with flamingos before their migration.

The Colosseum is placed under the unlit sky

Why don't you write books anymore?

I was looking for an unparalleled beauty.

I didn't find it.

Do you know why I only eat the roots of trees?

Because roots are important.

The nuns laugh and blow with a breath

The flocks of flamingos rose up.

They flew away towards the sunrise.

Back to the island where he met Alisa

The beauty of Rome is not limited to the magnificent architecture

But also the light shadows of the eyes

The corners of her mouth

One summer many years ago

The young Jep and the young Alisa were standing under the lighthouse.

The young girl smiled gently at the helpless young man

The beams of light from the lighthouse lit up his eyes

It was the desire of youth, the dream of innocence.

Only then did Jaap understand what beauty is

It is the power that lurks

When Jep thought that the decaying and powerless

Forty years later, this time and this moment were one.

His novel would begin again.

He will no longer look for it, he will create it.

then is there any meaning in life after that moment?

can give us an answer

The flamingo on the balcony of a centenarian

The giraffe of the circus master

The ordinary photos taken by the photographer every day

What made him dream for decades

The moment when his first love takes off his clothes for him.

The beautiful light is wild and capricious.

The so-called beauty is like a deception to us.

True beauty does not exist on the surface.

It is out of reach.

Though it cannot be reached

but the heart yearns for it

We spend our lives in pursuit of beauty.

The beauty that is seen, blooms and then disappears.

The moments of life we define can never take away the meaning of the rest of our lives.

For the flower of life is beautiful in itself.

It always blooms before the final bell rings.

This article was published by the #author at #Time on the #website name, if in doubt, please contact us.
本文链接：https://www.toomic.com/movie/204.html