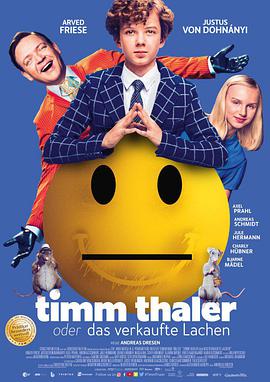 The devil told the boy

If you are willing to sell your smile to me

You can have the superpower to win every bet

Do you think the boy will agree?

The boy Tiam and his father live in a small town

Although the family only father and son

But they lived a simple and beautiful life

On weekdays, they would bet on horses together

Or walk down the street

But the arrival of two strangers

Shattered the peace and quiet of the past

She would become Tiffin's stepmother

And will also be Tiffin's brother

Tiffin smiled awkwardly and had to accept

What he didn't expect was the

The arrival of two people

Stepmother was not an easy-going person

His brother would secretly squeeze him

Even hit him with her hands

During this period of time

Only his father and his best friend Ellenda

could bring him warmth

But it didn't last long.

His father died in an accident

He no longer had anyone to rely on

One day Tiffin wandered the streets in despair

He went to a horse track

He gambled with the only money he had

But before the money was even warm

His money was taken by street crooks

Tiffin, who found the money, was targeted by the crooks again

He became a penniless boy again

He wants to make a deal with him.

It turns out that

The man with the sunglasses was not an ordinary man

He was a demon who lived in hell.

He had long been interested in Tiffin's precious smile

and wanted to take it for himself

To make sure the agreement was valid

He immediately went to bet on a game

He won a large sum of money

And just as the devil said

Even in the cinema, watching the absurd comedies

He could only make a strange dry coughing sound.

His best friend, Ellenda, was the first to notice the difference.

She asked Tiffin why he won so much money

And yet he was so unhappy.

Tiffin made it up.

She said she had robbed someone else while they were on fire.

She told her mother about it

And she called the police.

Because of this incident

Tiffin and Ellenda had their first disagreement

Can you believe it?

This boy would have won a bet with anyone.

He would have won.

The students who bet with Tiffin

No one lost to him.

Some of them didn't believe it

Still want to bet with him

The result was that the bureau failed

Tiffin, who won every time he gambled, became more and more enthusiastic about betting with others

The result was very fruitful

The three of them won a lot of money

The stepmother changed her sarcastic attitude

She was very affectionate to Tiffin

They decided to gamble again

But this time there was an accident

The judge suddenly announced that the top three horses had broken the rules.

The line was cancelled

But he wasn't happy at all

Alenda was walking away from him.

His smile could never come back

Tiffin, who was working in the hotel, was surprised to find

The devil had replaced Ellenda's eyes

The devil found the sad Ellenda

And traded her beautiful eyes

in exchange for a pair of healthy legs.

Told her it was the devil's plot

And made a bet with her

That her eyes would come right back.

The devil's ugly eyes turned back.

He had to put on his sunglasses again

At night the bartender told Tiffin

His smile will be back, right?

But it wasn't as simple as they thought

Because of a gambling game

Became the richest man in the world

Tiffin will inherit his huge fortune

Tiffin became the richest man in the world.

But not long after living in the mansion

The devil reappeared in a new guise.

Helm could no longer escape his control

He had to be in his clutches

To earn money for him to sell smiles

Tiffin was worried that the devil

would get the attention of his family and friends

And deliberately distanced himself from Ellenda

In the long run

Tiffin can only live in the shadow of the devil

And gradually became as cold-blooded and heartless as he was

He began to cooperate with the devil.

He started working with him in various activities to make money.

And found him to be a completely different person

He became cold and heartless.

Ellenda ran away in sadness.

She found the bartender at night.

The bartender told her

Because he had made a deal with the devil

The two of them had a long discussion

On that day, a celebration party was held at the stable

Ellenda knocked on their window.

Finally, they trapped Tiffin in the underground warehouse.

Tiffin was touched by Ellenda's words

Give your hand to the other side

So before the devil arrived

Their wager was fulfilled.

Tiffin was finally free to smile.

To trick them into trusting him

But Tiffin immediately saw through his trick

He was immediately exposed

In his anger, the devil turned himself into a mouse

Tiffin was adopted by Ellenda's family

They lived happily ever after

If the devil wants to win every bet with his ability

In exchange for your smile

After reading this story, I believe you

foolishly agreed to the devil

No matter how much money

Is not as good as an open heart smile

May you in front of the screen

May you be happy and cheerful

This article was published by the #author at #Time on the #website name, if in doubt, please contact us.
本文链接：https://www.toomic.com/movie/207.html