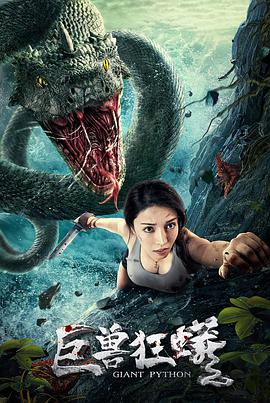 Man exploring in the wild.

Surprisingly, he was attacked by a python.

He was scared and did not know what to do

Just want to attack, he was bitten by the python.

The companions do not yet know what is going on here.

The purpose of their trip

were looking for a missing child.

A woman had just found her son's cloth shoes on the ground.

The python was close behind.

The man spots the danger.

Pushes his wife away.

Waited until everyone turned around.

Found such a huge python.

Scared everyone to run for their lives.

They fled to a cave.

The boy, Xiao Shuai, happened to be trapped here.

The couple soon saved their son, the

while another group of people

instead began to search for treasure in the cave.

They started to attack the intruders.

Then Dazhong was captured.

What's even more frightening is that

The python from before followed.

Someone found a hole.

Told everyone to flee quickly.

Before leaving the cave

Xiao Shuai found a snake egg on the ground

He quietly picked it up and took it out

One of Da Zhuang's men was attacked by a giant python

After the people escaped from the cave

The purpose of his visit to the island

Wasn't to help find someone at all

But to find treasure

He threatened Xiaoshuai's parents with death

To transfer the family land to him

Xiaoshuai's mother had an attack of snake venom

The two were brought back to the village for treatment.

He escaped for the time being

But Xiaoshuai's mother was too deeply poisoned

was beyond medical treatment

Someone came to report

The village was attacked by snakes.

The village chief began to scold the people

They should not have ventured onto the island

Before she died, her mother gave Shuai a pendant

She told her son to be a good person

The boy found a snake egg

The boy took it as a pet

He kept it at home

Unexpectedly, his father found it

The father ordered his son to give up the snake

The village has a clear rule against keeping snakes

Xiao Shuai did not want to

He escaped from the house

But the father's words had been heard by the neighbors

The villagers came after him

Xiaoshuai was forced to the river

He let the snake out of the bag

He told it to hurry home

The villagers were coming after him.

But the snake refused to leave

A group of black snakes crawled out from the shore

For the safety of Shuai

Now they turned around and left

Xiao Shuai became a researcher in a biological company

The company discovered a plant

plant that can regenerate the genes of honeysuckle

According to the research

Honeysuckle is in Xiaoshuai's hometown

The boss arranged for Xiaomei and Xiaoshuai to work together

Everyone wanted to find the gold and silver grass

Little did they know that danger was coming

A man-eating flower was attacked

began to fight back against the crowd

In a few moments

Two of the boys lost their lives

Everyone retreats into the cave

Xiao Shuai chose to break the back

Just when he was about to be in danger

Because he was left behind

The two were separated from the team

A golden and silver python was approaching Xiaoshuai

Little Marshal recognized this python as the little snake back then

He greeted the little snake happily

And let Xiao Mei try to pet it

The golden and silver python was frightened and left

Xiaoshuai rushed to meet up with the team

She stretched out her greedy hand

Unexpectedly, it was the largest cannibal flower

The cannibal flower was alarmed

Da Zhuang did not hesitate to shoot at it

Unexpectedly, it attracted a black python

This is a crazy python

She was attacked by humans

Dazhong saw the situation was not good

He sent one of his men to block the attack

He took the opportunity to escape

All of them fled to the cave where Xiaoshuai was

She saw the golden and silver python

When Xiaodi found the gold and silver python

They found a big secret

The wounds were instantly healed after the python licked them

Everyone aimed their weapons at the black python

The two snakes were frightened and separated from each other

It seems that its wound has been healed

Immediately jumped to stop it

The black python swung its tail and sent Marshal flying

And then it bit him on the neck

And dragged him away with him

Fortunately, his father arrived in time

When his life was in danger

The golden silver python came to his side

It helped him to heal his wounds

As the black python blocked the entrance of the cave

Although Xiaoshuai was saved

But he could not stop it

The golden and silver pythons were hung up

Da Zhuang and his men were ambushed around

Waiting for the black python to enter the ambush circle

All of them attacked together

But the black python was not to be messed with

A tail swept away several people

He jumped on him

Then they escaped from the cave together

He picked them and put them in his bag

Wait until everyone escaped.

Bullion wrapped around Dajiang and bit him.

He decided to be a kind person.

He gave the gold and silver grass to Da Zhuang to eat.

He saved his life.

Unexpectedly, Dazhong will be revenge.

He wanted to kill Little Marshal.

At this time, the gold and silver python again pestered Dazhuang.

took a bite of the golden and silver python.

End of the movie

The gold and silver python was also cured.

Go back to the jungle.

We will see you next time!

This article was published by the #author at #Time on the #website name, if in doubt, please contact us.
本文链接：https://www.toomic.com/movie/232.html