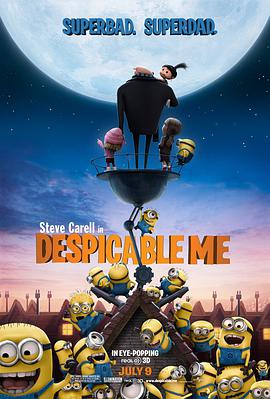 Hello everyone, today I'd like to tell you about a

A stupid thief leads a group of little yellow men

Finally, he becomes the most powerful thief on earth.

A kid on a trip accidentally falls on a pyramid

The travelers tragically discover that the pyramid is actually a fake

And the real pyramid was lost at some point

So the countries to prevent the loss of cultural relics

The Eiffel Tower was closed to visitors

Under the Great Wall of China, many tanks were placed to guard it

Until now, the police do not know

Who actually stole the pyramid

is a super bad guy

He never stands in line when he goes to buy breakfast

He also froze all the other customers in line

And his family dog is also a vicious dog

Uncle Badass saw that someone was even worse than him

He even stole the pyramids, so he got a bit restless

He went to the basement of his house

He took out the Eiffel Tower that he had stolen

And the Statue of Liberty

This time, but the little bad guys are excited little yellow people

One by one, they are ready to take out weapons and bad uncle to start

And Uncle Badass's plan this time is

To steal the moon from the sky

To prove that he is the most powerful thief on earth

The next day, Uncle Badass came to the Badass Bank

To help them get the money they want

This is the one who stole the pyramid

The boss is not optimistic about Uncle Badass's strange plan

Of course, the loan is also not to get the

decided to steal the world's most sophisticated weapons

This thing can shrink anything into the pocket

It can be called the thief's magic weapon

But just as the stuff arrived

When the bad boy met the road robbery

Follow the little yellow man ended up with a

Stealing chicken but not the rice

Now the little yellow man can not swallow this grievance

It was never expected

Bad Boy's security measures are more ruthless than anyone else

A variety of shark bodyguards

Uncle Badass thought of using these children to break in

So Uncle Badass came to the orphanage dressed as a doctor

He wanted to get acquainted with these children

and pretend to adopt them

They played with all kinds of equipment of Uncle Badass

Even the vicious dogs are afraid of the cute little kids

Only feel that they are also unlovable

So began their own death

All kinds of experiments with potions

In fact, the cookie robot made by Uncle Badass

Finally, with the help of the little yellow man

Then with the shrinking gun

One step closer to picking the moon

But the result is

He was taken on a roller coaster ride by the kids

He was so scared that he began to doubt his life

He realized that playing with kids in an amusement park

It was much more fun than being a thief

Then the bank owner called.

Tell Uncle Badass that his account has no more money

Will lose the boss again

Think about the owner of the pit

At the critical moment, the children took out their own money

Bad Uncle that a touching ah

And do not want to steal things

Just want to play well with the children at home

This is not good

Little yellow man also have nothing to do all day

There was no motivation at home

Before long, the children were picked up by the orphanage

Uncle Badass was missing the kids

He decided to restart his plan to steal the moon

This time not to become a big bad guy

Take a moon to her

To show that he really wants to be their father

This side of the bad boy after losing the shrinking gun

Just as Uncle Badass was launching the rocket

Uncle Badass rode the rocket all the way to space

Little yellow man saw the boss success on the moon

That is so excited to be overwhelmed

Just when Uncle Badass is ready for everything

After the moon was shrunk and in his hands

Suddenly the earth had no more tide

Even the werewolf couldn't transform.

This shrinking gun has a time limit

After a day, the shrunken object will be enlarged

But when he arrived at the orphanage, he realized

The daughters have been kidnapped by the bad boy

For the sake of his daughters, Uncle Badass does not want the moon

And do not want to become the most powerful bad guy

Doctor with the little yellow man rushed to save Uncle Badass

The bad boy was driven out of the base

And the bad boy did not expect that

The moon has begun to grow bigger and bigger

If it continues like this, everything around will be crushed by the moon

Uncle Bad Guy rushed to save his baby girl

Luckily, before the moon became bigger

The family was saved unharmed

Only that miserable bad boy

Before the moon became bigger, he didn't get out in time

He was sucked on the moon

From then on, he could only stay alone in space, and could never return to Earth

And, the most important thing is

He found a more fulfilling goal

That is to take good care of his three baby girls

This article was published by the #author at #Time on the #website name, if in doubt, please contact us.
本文链接：https://www.toomic.com/movie/243.html