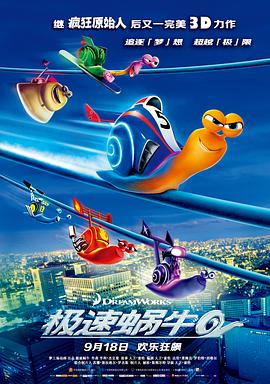 A little snail aspires to become the fastest snail.

He accidentally falls into the engine of a racing car

His body undergoes a drastic mutation

Gained the ability to run fast

After rubbing the lubricant

Running speed even racing cars can not catch up

In a vegetable garden

There is a group of very hard-working snails

They have to get up before dawn every day

Until the sun is above their heads

They climbed up to the top of the tomatoes

In the middle of climbing, they might be picked up by crows

Even the tomatoes were smashed into meat pies

And when they finally get to the top of the tomatoes

Before they can eat a few bites, they have to rush home again

All because they are too slow to climb

Sailor is a snail with a dream

His childhood dream is to become the fastest snail

Or even become a racing driver

Of course, Sailor didn't just talk about it without practicing

He would practice racing every night

Obviously, it is impossible to become a race car driver at such a speed

In order to stimulate his faster speed

As a result, almost not mowed by the lawn mower to harvest

Luckily, Fatty was able to flush him away with a water gun

This failure made Sailor very disappointed

He stood on the road and looked at the passing cars

I wish I could be a racer too!

Then suddenly a truck

brought Sal to the racing car

This speed made Sal excited

But he couldn't hold on and was taken into the engine compartment.

Under the extremely high temperature of gasoline

And the very low temperature of liquid nitrogen stimulated

Not only did Sailor not burst.

Every cell in his body was transformed.

The energy of the liquid nitrogen was stored in Sailor's cells.

His heart began to accelerate.

When Sal woke up.

He woke up to find his eyes had turned into light bulbs.

There were alarms on the snail's shell.

Sailor at first thought he was no different

He was about to be trampled to death when

He exploded with his superpowers

The snail shell actually turned into a turbo engine

Ordinary toy car can not catch up with him

Sailor himself was just out of danger

Crow in the sky caught away

How dare you touch my brother!

Sailor immediately burst into a flood of power

With the speed of lightning to chase the crows

Finally beat them until they doubt their lives

At that moment, a truck driver, Xiao Huang

Yellow and his team like to play racing at night

The snails they caught were all modified racing snails

Each one of them is faster than ordinary snails

Sailor didn't know what was going on on the track

The others were still laughing at Sailor, who couldn't move.

In the blink of an eye, before Sailor could push himself

Already ran off the track

Yellow knew that he had found a treasure

Other snails were also envious

But Fatty was worried that Sailor was sick.

He also said he would take Sailor to the doctor

In order to take care of his brother

Fatty was by Sailor's side all the time

He was constantly challenged by insolent little snails

But one by one, they all became the defeat of Sayer

To make him a star snail

So he raised money from all over the world

He took Sailor to compete with him.

Not only did the speed increase a lot

And also much cooler

But Sailor wasn't satisfied with just competing with snails for speed.

Can race with professional drivers

Yellow took the snail to the race

He was ridiculed by the organizers

The other snails started to help Sailor cause havoc

The snail caught the attention of the reporter

Once Sailor became a hot spot

The organizers had to accept the suggestions of the audience

Sailor was allowed to participate in the race

Sailor was put on the racing track

Sailor's speed was comparable to theirs

The only advantage is the flexibility of steering

But if you're not careful, you'll get run over

While the other cars were changing their tires

Yellow's family and other snails rush to the field

First, they put on lubricant

Then put on lipstick

And then add fuel

Then it's a vibration massage

And rock music to stimulate

Sailor is back in action.

Sure enough, the speed is much faster

With a slick and flexible positioning

He took the lead to the first place.

Sailor was hitting the barrier.

Sailor was confused about his direction

When he was just one meter away from the finish line

The tragic Sailor saw everyone disappointed in him

Can not help but hide in the snail shell

He wanted to give up the race

Fatty got anxious at that moment

He took a hot air balloon to encourage Sal

But this time the crows took him away again

But this time Fatty

He managed to tame the crow and came to Sailor's side

Sailor finally got out of the broken snail shell

He continued to run at his most primitive speed

Fortunately, the other cars were also hit with black smoke

According to the rules

Sailor and the red racer both dragged heavy things forward

Finally, he had an idea

Shrunk himself in the snail shell and rolled up

Unexpectedly, he was the first to roll to the finish line

Thus, Sailor became the champion of the Formula One race.

The snails in the vegetable garden didn't go to steal vegetables today.

Instead, they climbed up to the window to watch the race on TV.

Since Sailor won the race

The little snails are liked by humans

Humans have transformed the snails in various ways.

The snails have been able to say goodbye to turtle speed.

Finally, Sailor, under the careful care of Little Yellow

His snail's shell grew back

And it looks even more handsome and high-class

The name (Turbo) translates to "turbo"

It is the turbocharger in our cars

After watching this movie

In fact, the most touching thing is probably not the self-haloed Sailor

But the brother Fatty who is always by Sailor's side

No matter what time it is

This kind of brotherly love is also very heartwarming

Of course, it can also be said that sisterhood

Because in reality, snails are not gender-specific

They themselves are hermaphrodites

In other words, the "boy" Sailor can also lay eggs

But fatty never wants to admit it

This article was published by the #author at #Time on the #website name, if in doubt, please contact us.
本文链接：https://www.toomic.com/movie/274.html