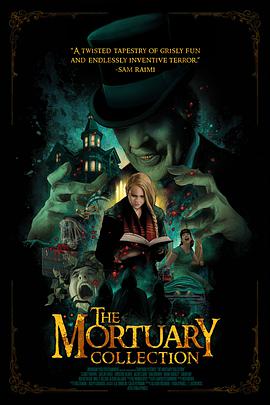 In a remote corner of the town of Yahweh there is a funeral home.

The person in charge is an old man named Marlowe

Just after earning the body of a boy

A young woman named Leia burst into the funeral home.

She said she saw a job ad on the door.

I'm here to apply for a job.

Leia wasn't afraid of the body at all

Also interested in the body of the boy parked in the hearse.

Marlowe had been waiting for a successor.

Leia's presence made him very excited.

He leads the other party to the office to sign the contract.

Lea provocatively asks him to tell a gruesome story of death.

Then Marlowe tells it slowly.

At the cocktail party

A beautiful young woman pretends to get rid of her suitor.

Hiding in the bathroom.

But her true identity was that of a thief.

Stuffed into her underwear.

After counting the loot

was about to leave the house

I suddenly noticed the mirror cabinet embedded in the wall.

There seemed to be something hidden.

She became curious about the locked mirror cabinet.

He took out a knife and tried to pry open the mirror cabinet.

Tried everything to break the cabinet door.

Unexpectedly, found a huge monster with tentacles inside.

Pulled her into the cabinet and killed her

After the end of this story

Leia contemptuously thought it was not scary at all

Marlowe's mouth rose to a smile

He said he didn't care about the cause of death

What mattered was the meaning behind each story.

Sooner or later, you will reap the corresponding fruit

After signing the contract, Marlowe led Leia through the various areas of the funeral home.

Leia noticed an old photograph hanging in the corner of the funeral home.

It was at least a few hundred years old.

One of the people in it was Marlowe.

Leia was curious about him.

Trying to find out how old he was.

So Leia asked Marlowe to tell another horror story

In the second story

A tall, handsome boy with some schoolboys organized a feminist movement

And hands out free condoms to many girls

Feminism by way of feminist freedom

He then invited all the girls to a party that night

Among them was a young, beautiful, curly-haired girl.

In fact, this boy was a pervert with a good look.

He organized it with a few of his students.

At the party, he took the curly-haired girl to the second floor bedroom

The two of them are immediately on fire.

The next day the boy wakes up from his sleep

He found that the curly-haired girl had left

The boy just thought she was a love affair

Naturally, he did not make the call

He rushed to the clinic to check it out

But the diagnosis showed that he was pregnant.

As his belly grew larger and larger

The vomiting and retching became more and more severe

The boy felt that something was wrong.

He found the phone number of his curly-haired schoolmate

He asked her to come out to meet him

The curly-haired girl gave him her home address

The boy drove frantically to the curly-haired girl's house

By now, his water had broken

He was about to give birth

After seeing the boy

Curly-haired girl's parents were not surprised

And transformed the dining room table into an operating table

Prepare for the delivery

In the end, the boy gave birth to a small baby

But he died instantly of hemorrhaging.

The curly-haired girl's mother put the baby in a bedroom

And this bedroom already had several cribs in it

They were all delivered by men

They all died of haemorrhaging.

The bodies were buried by the curly-haired girl's parents

And eventually became a missing person

And these incestuous babies are pointy-clawed monsters

Not human at all

At the end of this story

At that moment, there was a sudden thunderstorm outside.

Marlowe took her to the embalming room.

Marlowe says all the bodies have a lot of information on them.

They can tell us what kind of horrible things

What kind of horrific stories had happened to the victim during her life.

He instructs Leia on how to look at the body.

The two men found bed sores on her back.

There was some toxins in her mouth.

And the wedding ring on her ring finger was engraved with the words "till death do us part."

Then Marlowe began to tell the woman's story.

A couple was in love.

The wife was seriously ill and became a living death

She had to live on a tube of nutrients every day.

The husband thought his wife's days were numbered

So he took care of her patiently

to accompany her in her last years

Although she did not die

But there was no improvement either

Not only was the financial situation unbearable

So he silently left him a few pills

suggesting that those who use these pills

would die in a short time without leaving any traces

Although the husband was apprehensive

He decided to kill his wife anyway

He decorated an elaborate dinner

Dressed his wife in a nice dress

Placed her on a chair.

After the meal, the husband gave his wife a small bronze statue of an Arctic rabbit

Then he put the porridge with the pills into her mouth.

After feeding her, she suddenly trembled.

He scrambled to get the porridge out of his wife's mouth

But his wife fell head over heels on the table

The husband decided to dump the body

So he tried to get his wife into the big box with the wedding dress.

To get his wife inside.

Cut off his legs

It turns out that he only faked his death

He could still be rescued

The wife really died this time

Then he stuffed his wife into the wedding box

Moved into the elevator

He also took off the wedding ring engraved with the words "till death do us part".

But just as the elevator was going down

There was a malfunction

The husband was so scared

And in a trance, he saw his wife and his love for each other

And the wedding dress box was bleeding continuously

When the box was opened

The wife had turned into a horrible skeleton

The wedding ring was put on the husband's ring finger again

Finally the husband went crazy in the elevator

After the story was told

Took Leia to the incinerator

With the intention of pushing the coffin into the incinerator.

To complete the last step of Leia's training.

Everyone ends up with evil

But the evil man is likely to remain free

It turns out that Leia hadn't really come to apply for the job.

but to find the boy.

She tells a fourth story

She was a babysitter for a small-town doctor's family.

One day when the small-town doctor and his wife were out of town.

Leia was left at home with the children overnight.

It was a thunderstorm day.

She was in the kitchen, cooking dinner.

Suddenly a news item came on the TV.

The insane asylum's security system had been breached by a lightning surge.

A riot had broken out.

It was filled with mentally ill criminals who were very aggressive towards women's rights.

One of them was a 36-year-old white man.

He is said to have escaped from the hospital.

His whereabouts are unknown.

Leia saw a man very similar to the description.

Standing in the kitchen, covered in blood.

To protect the child.

She heroically got into a fight with this man

And finally kills him.

But when the town doctor and his wife returned home in the rain, fearing for the safety of their children.

They found signs of the fight all over the house.

Leia was lying in a pool of blood.

And to their despair.

Their child had been roasted alive in the oven.

The real news bulletin was being broadcast on TV.

The insane asylum has been compromised.

A missing murdering psychopath is none other than Leia.

It turned out that she was a psychopath.

And a murderer of many children.

After killing a child.

She would take one of the child's teeth as a souvenir.

But the town doctor came back too soon.

She didn't have time to take the child's tooth.

This time, she pretended to apply for a job

It is to recover the boy's tooth

He said that the small town doctor lost his beloved son

is the reincarnation of God

The doctor who induced his husband to kill his wife

Marlowe also said that everyone has their own destiny.

And that Leia's destiny was to take over her job.

But then Leia suddenly pulls out a dagger and stabs Marlowe.

Because she didn't want Marlowe to tell this story to anyone.

The safest way is to kill him.

And she said proudly that she would control her own destiny

But as soon as she stabbed him.

Marlowe didn't bleed at all.

There was just some mucus in the wound.

So he wasn't even human.

Leia realized she was no match for Marlowe

Wanted to run away.

But no matter how she escaped, she couldn't leave the funeral home.

Then the ghost of the child she killed suddenly appeared.

Took their own teeth.

At this point Marlo packed his bags

Intending to embrace a life of freedom

Who knew that not long after walking out the door?

The whole body paralyzed into ashes.

At the same time as Marlowe died.

Leia suddenly woke up from the operating table

Until then, she did not realize that she died after Marlowe had stitched her up.

Turned into something inhuman and ghostly

Marlowe became the new owner of the funeral home.

This story is from the movie "The Morgue Collection

Well that's it for today's movie

We will see you in the next episode

This article was published by the #author at #Time on the #website name, if in doubt, please contact us.
本文链接：https://www.toomic.com/movie/280.html