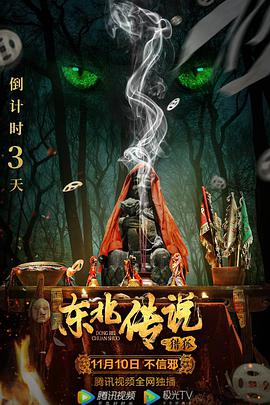 The Legend of the Northeast Fox Hunt

In the Northeast folklore before the Four Olds

Has been circulating a very evil legend

Legend has it that there are five major immortals: fox, yellow, white, willow and gray

The five immortals will be rewarded for their kindness and revenge

Therefore, the five immortals are also known as the family protection fairy

The sheriff has heard the most

Even now he can hear the voice of the weasel.

Who was tortured by the Yellow Fairy for killing the weasel?

The light ones get sick

The heavy ones lose their lives.

The story of the fox hunt takes place in a village called Majiatun in the northeast.

This village was blessed by Mrs. Hu San

Near Majiadun is a mountain called Yuefeng Mountain.

Anyone who offends the fox fairy will die.

But there are people who do not believe in evil

For their own selfish reasons

As a result, she was suspected of being retaliated by Hu's third wife.

In the dark woods

and piercing female voices calling out the names of three people.

Although San Dezi, who told the old man that he would live, survived

Saying that no one in the village can escape, all must die.

They invited the goddess to communicate with the immortals

At the altar the fox fairy appeared.

The old man of the village asked the divine woman

What did he say to the fox fairy?

Some people proposed to burn the bodies of the two

But the family of the deceased refused

He was a young intellectual who came back from the city.

He did not believe that the fox fairy really existed.

Xiao Ma retreats to his subordinates

What happened to the kidnapped Sandezi Mountain?

At night when Xiao Ma gave his father's wake

The hearth came from the sound

laughingly said that the fox's nest is to die

Then he took out the tools to examine the body

The next day Xiao Ma woke up in the temple of Mrs. Hu San

When he returned to the shrine

Someone blamed him for letting him go

Then the coffin broke into pieces.

The villagers panicked and opened the coffin

A white fox jumped out

Look down and see

San Dezi has died, some say it is the fox fairy life

The people were terrified and rushed to invite the godmother

And then chanted a few incantations

After standing still for a moment, she told the old uncle

He had also fallen into the path of the fox fairy

Hu San's son asked the godmother where was my father's body

The witch said it was a fraud

The old uncle asked if there was anything he could do

The granny said the most important thing right now

is to burn the body

Thus, under the spell of the divine woman

At night, a villager named Ma Biao came to the house of the goddess

He asked her when the gold would be distributed.

Ma Biao could not resist his desire

He pushed her down and wanted to do whatever he wanted.

The godmother saw the figure outside the window

He kicked Ma Biao off the bed

On his way back to the village, he was attacked by a white fox and died.

Decided to go to the Moon Feng Mountain to investigate

As a result, he met Hu San by chance and while chasing him

Then he started to have hallucinations

He heard a woman call his name

He looked like the fox fairy was trying to kill him

Then he died with a fan

At the same time, Xiao Ma also had a hallucination

He was about to shoot his fiancée

Fortunately, he was knocked out by a spade from his partner

He asked him how his son had died.

The old uncle blew Xiao Ma out of Ma's village

Under the old uncle's instruction

the villagers moved out of the area

And the death of Xiao Ma's son, Magen, hit him hard.

When he examined Magen's body.

He found the same bruises on Magen's neck and his own arm.

The test revealed that it contained the toxin of magenta

Goldenseal is also known as mandrake

A small amount can suppress pain

If overdosed, it can cause hallucinations.

My fiancée said that every family in Magen's town has a crocus flower.

She said it was arranged by the goddess.

She said it was good for people.

Xiao Ma thought there was something fishy

So he sneaked into the godmother's house to check

He found a fox mask and several gold bars

A plan was born in his mind

Some time later, the godmother returned

The godmother kneeled down in front of Mrs. Hu

She thanked her for helping her win the gold

Promised to build a magnificent hall for Mrs. Hu

Suddenly a demonic wind blew by

The candle in front of the God's light was blown out

Said she should not use her reputation to harm people

Then she was awakened by a pot of water

Xiao Ma told the villagers about the effects of the goldenrod

It can make people hallucinate

The godmother used this property

to make the villagers believe in it

On the night of the wake, Xiao Ma had hallucinations

Also due to the inhalation of gold flower powder

So the bell block above the coffin was tampered with

So the godmother used the gold flower toxin extract needle

The old uncle said it was a hunting method.

I can't believe she used it to kill people

Xiao Ma asked her why she did it, but she had nothing to say.

The old uncle scolded the godmother for being a snake-hearted demon woman.

The villagers smashed the altar of the goddess in their house

Waiting for tomorrow morning to send the official

The goddess was killed.

The murderer was the dead Hu San

Xiao Ma asked Hu San why did you kill his father

Hu San said his father was in his way?

It turns out that there is a vault underneath the Ma Tun ancestral hall.

So Hu San colluded with Ma Biao, the godmother.

Forcing the villagers to move

As long as the villagers are stupid enough to move out.

They could take the vault for themselves

But the net of heaven is wide open

In the end, Hu San Godmother will not end up well.

But feudal superstition is ignorant, foolish and selfish.

From then on, Ma no longer believes in ghosts and gods.

Well, that's it for today's video!

Thank you for watching bye bye!

This article was published by the #author at #Time on the #website name, if in doubt, please contact us.
本文链接：https://www.toomic.com/movie/287.html