Animationmovie "The Greatest Journey to the West" commentary text commentary 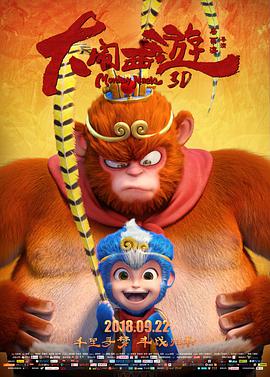 After Sun Wukong gave up the scriptures in the West

Playing mahjong and fishing when he had nothing else to do

Finally, he became a big and fat monkey

From then on, he became a fat, idle nerd

Even the golden rod was given to his little monkey pupil

The little monkey helped Sun Wukong to defeat the monsters

And protect Sun Wukong when in danger

Hello everyone, today to tell you a

A little monkey inherited the Golden Band from the Monkey King

In the past, when Buddha was still doing assembly line in the factory

As Rudrai did not wear shoes at work

After he was electrocuted, resulting in operational errors

As a result, the little empty behind one ear was imprinted with a mark

Since then, the little hollow has become a defective monkey

And because of this

Other small animals are bullying him

They even laughed at him for being a fake Monkey King

Then, to prove himself

With the help of Master Guan Gong

At this time, the Monkey had been driven away by the Tang Monk

Sun Wukong misses his master, so he uses monkey hair to change his master to play mahjong with a few people

Look at the little empty air does not believe himself

If you want the Golden Rod, you have to be your disciple!

There was no choice but to agree to it.

Goddess of Mercy's throne has become the monkey's stool

The only thing playing with the monkey

How to look at this, we think it is a lot of overload

Monkeys just play with the stick

Little empty can not learn

But in order to borrow the Golden Band of Will

One day when KhungKong went to steal peaches

He met the red-assed Big Boiling

He was very fond of KhungKong

Asking little KhungKong to take it

But at this moment, he could not hold it with his power

And also in the cannibal flower training agility

In this way, under the monkey's hands training

His agility was also increasing.

He became more and more like a little Monkey King

But Khung could not defeat the Monkey King Master

Will he still accompany the Longevity Monk to get the scripture

But the monkey said he did not want to go

It's been hundreds of years, I don't know how the master is doing now

In the middle of the night, Little Empty was in a hurry

While the master was sleeping, he tried to steal the golden rod

The little hand just fit in his ear

He is the legendary Bull Demon King

But it was useless to grab it

Since he couldn't use it

Asked Kiki and his friends to help him

After the Bull Demon King got the stick

The monkey just woke up

They didn't know what was going on

With his beer belly, he laughed at the Bull Demon King for not being able to control himself

But after a few moves, he realized

His golden rod was missing

Now he knew that the little empty air had stolen it

Without the help of the Golden Band

Monkey is no match for the Bull Demon King

Even a few small cows were bullying the monkey

Don't mention how miserable it was

Little Khongkong wanted to save the master

Unfortunately, he was also knocked out by the Bull Demon King

He was played with as a toy

Little empty air after waking up

Luckily, Boiling brought out of the Mountain of Flowers and fruits

Under the leadership of the Tendou Yun

Monkey in a cage can not do anything

How helpless it was

Little Empty and the others had just entered the cave

They ran into the cow with the gold chain

To bully their partners

Boiling is going to be a force to be reckoned with

Under the cover of Boiling

Little empty air is riding on the somersault cloud

And with his own will really picked up the golden rod

When fighting with the Bull Demon King

Is simply cute to the end

Finally the Bull Demon King slammed down on the stone

Once again, the golden baton was snatched away

At this time, Rudrai appeared again

And so Sun Monkey was released by Rudrai

This time he was not prepared to fight

Instead, he gave the golden rod to the little empty air

The Bull Demon King is not a vegetarian either

But this also helped Little Empty

Little Empty's soul flew to the front of Rudrai

His master was actually Buddha Ru-lai

In the lava, Little Empty turned into a red golden monkey

He was holding a golden stick

It was like the reincarnation of the little Monkey King

The Bull Demon King kept absorbing the lightning from the sky

Together with his own lava power

He directly beat the Bull Demon King into a prototype

After a sweeping blow from Little Empty

The Bull Demon King was hit like a baseball

Finally, it was over

End of the story

Now he can retire completely

When he was happy, he gave the golden rod to the little Khongkong

From now on, he only needs to eat peaches and play mahjong on Mount Huaguo

Little Khung-Kong took the Golden Banded Baton and was reluctant to part with his master when he left.

And after the monkey said goodbye to the little empty

He returned to the monk's side obediently

This article was published by the #author at #Time on the #website name, if in doubt, please contact us.
本文链接：https://www.toomic.com/movie/291.html