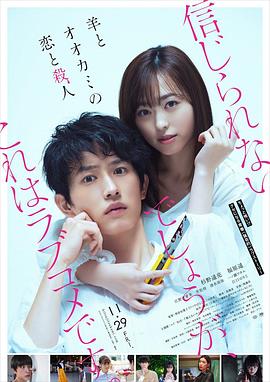 When a girl kills someone.

Would be considerate enough to stay away from the boy.

Lest the blood splash on him.

The boy hides to help the girl watch the wind.

Xiao Shuai is a geek who can't do anything.

Because it feels that life has failed too much.

That day he intended to hang himself.

As a result, the rope can not bear the weight.

Xiao Shuai even failed to kill himself.

Just when he was more desperate.

A light hit his head.

It turned out that there was a hole in the wall.

Through the light of the next door.

Xiao Shuai could not help but be curious.

Lie on the wall and began to peep.

Of course, he did not find himself being spied on.

Because of the angle.

Xiao Shuai could not see anything.

In a hurry, Xiaoshuai walked to Xiaomei's door.

Trying to peek through the cat's eye.

Then he found a girl downstairs is watching him

Before leaving, she also hung food on the door of her brother's room

Seeing the girl walking away

Then when he looked up

And found Xiao Mei is watching him in the hallway

Xiaomei smiled gently and did not mind

Instead, she invited Xiaoshuai to eat at home

While Xiao Mei was preparing the food

He saw that the hole was inside the bookshelf

Xiaoshuai tasted it and couldn't resist eating it all

Xiao Mei also did not mind him

Instead, he was more motivated to spy on Xiao Mei

Even the time to brush his teeth is not wasted

Xiaoshuai thought it was Xiaomi's boyfriend who was jealous

Xiaoshuai side of an excited

Book fell down that hole was also blocked

Do not believe that Xiao Mei killed someone

When he heard someone knocking on his door

In the cat's eye was Xiao Mei with food

Xiaoshuai and Xiaomei eating a meal

Why did Xiao Mei treat him so well as a loser?

And Xiao Mei replied that he was with Xiaoshuai

Only then did he feel less lonely

After Xiao Mei went back

Xiaoshuai peeped through the hole again

He saw that Xiao Mei was normal

He thought he was just hallucinating

The woman tidied up the books on the bookshelf

When the woman left

He saw the woman turn her head

When Xiaoshuai opened the door again

The corridor was deserted

Xiao Mei is still so beautiful and gentle

Xiaoshuai - while doubting and comforting himself

That day was an illusion

He couldn't help but scream out loud

Xiao Shuai fled from the house

And Xiao Mei chased him with a knife

Finally Xiao Shuai was chased to a rooftop

And Xiao Mei was already following him

He was going to kill himself

He lived for a long time because he liked Xiao Mei

If he died by Xiao Mei's hand

He had no regrets to die

With a mouthful of words

Not only did Xiao Mei not kill Xiao Shuai

She also started to fall in love with him

The young couple ate together every day

And chatting through the hole

He got a job as a sales clerk

He helped Xiao Mei carry her bags when they were dating

So that Xiao Mei can kill people smoothly

Although Xiao Mei said that he killed all the guilty people

But Xiao Shuai was still getting more and more worried

But the newspapers didn't report any murderers.

That day, he met the girl who came to visit his brother.

The girl's name was Xiaochun.

His brother also said a few words to Shuai

Shuai saw Haru's brother tied up from the cave

When Xiao Mei was about to do it

But Xiao Mei killed him anyway

He saw Ling, the woman from before.

She was cleaning up the scene with her men

Xiao Mei had never been so close to anyone

Unless this person is his target

Said and showed his finger earrings

The room is very complete with all kinds of torture equipment

So Xiao Mei killed him

That day Xiaochun came to see his brother

Xiao Shuai wanted to keep Xiao Mei from being exposed

He wanted to get rid of him quickly

But Xiao Mei saw this scene too.

To find his brother, Xiaochun talked to Shuai about calling the police.

Xiao Shuai urged him not to call the police

When Xiao Shuai was worried about what to do

Sister Ling found him and said she could help him

That is, not by the shadow

The room was cleaned and tidy

It was completely different from what Xiao Shuai saw that day

There was a travel plan to Thailand pinned on the wall

Xiaoshuai was on his way home

Saw Xiao Mei being held by a hooligan

But did not resist

He thought Xiao Mei had cheated on him

Xiao Mei asked him why he was so enthusiastic about Xiaochun

He only likes Xiao Mei

It seems that Xiao Mei has not completely accepted Xiao Shuai

They asked Xiao Mei to help them kill their rival

Use Ling's organization to dispose of the body to avoid exposure

Don't forget that Xiao Shuai is just an ordinary person

Then she saw Xiaochun

During the meal, Xiao Mei gave Xiao Xiaochun a drug

She wanted to kill him.

But Xiao Shuai stopped him

Xiao Mei also said that he was lying to Xiao Shuai

When Xiaochun woke up, he confessed to Shuai.

When Xiao Shuai didn't know what to do

Ling said this is the first time

Xiao Mei notified him but no body

And Xiao Mei is a wolf

Xiao Shuai was arrested by the triad

Knowing that Xiao Mei did not cheat

He was very happy

So that man was a triad

But the triads didn't let him go

Give him a little lesson is to threaten Xiao Mei

But Xiao Mei left without saying anything

Tell him to persuade Xiao Mei to be more restrained

Too many corpses will increase the risk

Xiaochun continued to ask Xiaoshuai to meet him.

He is the best for Xiao Shuai

He called and rejected Xiaochun

He was already sure

Even though he and Xiao Mei are not the same person

But the only one he liked was Xiao Mei

No one can replace her

He took the knife and found the gangsters

The gangsters knocked him down in a few blows

Then they punched and kicked him

A tranquilizer bullet rolled in

Everyone lost their strength and collapsed to the ground

Xiao Mei was wearing a raincoat

She came in with a utility knife

The gangsters were killed in a few blows

The black boss came out with a samurai sword

Mei was not afraid

Once the black boss cut his throat

Do not want Xiaomei forced to do something that does not want to do.

Xiaoshuai seized the opportunity to confess to him again.

And this time Xiao Mei also responded to him.

Xiaoshuai collapsed to the ground.

He wanted to confirm his feelings.

Always wanted to try what it was like to kill a lover.

Xiao Shuai was happy too.

Even the wound doesn't hurt.

At the end of the story Xiao Mei and Ling met.

That's when Xiaoshuai appeared with his crutches.

Let him wait a minute.

They move in together to discuss cohabitation.

The whole movie is imaginative.

Although the female lead has a beautiful face like a flower

But continues to kill people.

The male lead is a voyeur.

But he was reborn because of the heroine.

Killing and peeping fall in love.

Inevitably, some disconnect will be encountered.

But it is fatal.

Lovers find each other's flaws in their time together.

But through the efforts of both parties and the addition of outsiders.

Finally the conflict erupts until it is resolved.

Eventually, both sides readily accepted each other.

This article was published by the #author at #Time on the #website name, if in doubt, please contact us.
本文链接：https://www.toomic.com/movie/300.html