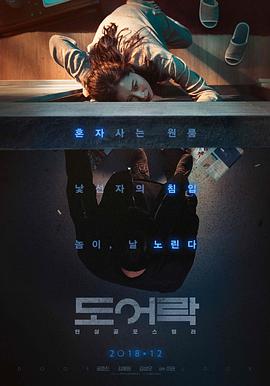 This woman who lives alone has recently encountered strange things.

There was inexplicably half milk in the refrigerator.

Came to the toilet

The toilet lid that was covered last night was open.

The lid of the lock on the door was also opened.

There were fingerprints on it.

someone had pressed it.

The lady quickly changed the code.

The lid of the door lock was closed before leaving.

But when she came home at night

the lid was opened.

The woman couldn't have stayed asleep.

It was at this point

she heard someone pressing the combination at the door.

She gathered her courage and stood up to check.

Until the sound stops.

The woman looked through the cat's eye and found the hallway empty.

Only a cigarette butt was left at the door.

The woman called the police.

But the police said no one was hurt

She had to go back to sleep.

But while she was sleeping.

A man literally crawled out from under the bed.

Anesthetized a woman with LSD

And then brushes her teeth.

In the bathroom shower.

He carefully puts the toothbrush back in its original position.

Gets rid of the hair in the bathroom.

Picks up his watch and sets the alarm.

Then lies naked on the bed.

The next morning the woman was awakened by the alarm clock

She felt a headache

The woman's name is Zhao Jingmin

She is a timid woman who lives alone

At that moment, a strange man came.

The man kept staring at Minnie.

The man said he was a carpenter

He lived near Minnie's house

He also wanted to ask Minnie to have coffee with him.

Fortunately, the section chief came out to relieve the situation

and asked the security guard to kick the man out

But he didn't give up.

When Minnie was waiting for the bus after work

He suddenly appeared and dragged Minnie to death

Forced her to go home with him

Minnie did not have the strength to break free

No one paid attention to her cry for help

Just then a car stopped at the roadside

He drove the man away

Then he got into the car and escorted her home

Looking at the chief of the department, Minnie felt a long-lost sense of security

But when she got home, Minnie found that the power was out at home.

She panicked and turned on the flashlight to light up

But suddenly there was a knock at the door

She held her breath

She slowly felt her way to the door

She found that it was the section chief

It turns out that when Minnie was leaving

She left her wallet in the chief's car

He came to return the wallet

When he saw that the power was out at Minnie's house

The chief was also eager to help repair

At that time, the chief asked to use the bathroom

Minnie went in to clean up before him

Turned around and found that the toilet lid was lifted again

She asked the chief why he knew her home address.

When she saw that he couldn't answer

But when the police opened the door

Minnie was stunned by the scene in front of her

The chief had been strangled to death.

But the police suspected that she was the murderer

Because in Minnie's room.

They found traces of a fight between the chief and someone else.

The autopsy report showed that the chief was anaesthetized and then killed.

Plus the clothes of the men in the room.

They suspected that Minnie and the men in the room

together with the men in the house killed the chief.

Since there was no evidence, the sheriff released Minnie first.

Knowing that there were other people in the house

Minnie got scared and decided to move out.

When she was packing up her room

Minnie found a room card in the corner

Try it is not his own home

So he tried one by one

Finally the door was opened in 701

The house was full of dust

The two of them soon found out the owner's spending records

So Min and Hyo-joo decided to wait for the owner.

The two followed them

They came across a fork in the road

They had to look separately

The doorway was filled with empty boxes of vegetable porridge

She was surprised to find

Minnie tried several codes but none of them worked

When she was about to leave, she remembered the new password of her house

Trembling, she entered the code and the door opened.

There was a dying woman lying inside

Her hands were tied and a bottle was inserted.

Minnie was about to call the police.

But the sound of the door opening came from outside

She hid under the bed in a panic

A man came in.

When the man wasn't looking

Minnie hid behind the door

But to her horror, she found that the woman's legs were gone

The man took out a saw and tried to cut off her arms.

She quietly went to the door

But at that moment the phone rang

But she was soon blocked by the man

Fortunately, a police car passed by

The man turned around and left

She was still holding a business card

It was the same one that Minnie gave to the carpenter

But the sheriff asked

How do you know this is a saw?

He hurriedly explained that he was a carpenter

Just after moving into her new home, she received a delivery

Inside was the phone she had left at the man's house

Opened it and was dumbfounded

Every picture was a picture of herself sleeping

At this time, her best friend suddenly called the video

After the phone call, but found that it was not the girlfriend

Not long after the girlfriend came home from work

Minnie anxiously shouted the name of her girlfriend

But the girlfriend did not respond at all

Minnie rushed to her girlfriend's home

At that time, her girlfriend was already unconscious.

The killer took out the saw again and aimed at her leg.

But then someone dragged her

It was the carpenter who had been following her.

Minnie asked him what he had done to her best friend

The carpenter didn't answer and ruthlessly slammed Minnie against the door

He was about to strike

Into the house she saw the bloodied best friend

Connected to the phone and tried

She went out to the convenience store with confidence

But a man suddenly called her

The man was the security guard from the apartment before

Did he catch the pervert who was harassing her?

Minnie was a little upset by the questioning

She panicked and headed for home

But when she turned around, the security guard had already disappeared down the road behind her

As soon as Minnie entered the house, she hurriedly locked the door three times

At that moment she received a call from the sheriff

Because just now the carpenter died

The real killer was still hiding in the shadows.

Minnie sat down on her bed.

Suddenly she saw the vegetable porridge on the table.

It was exactly the same as the one the security guard had just bought.

She turned on the security camera in a hurry.

Shortly before she went home

A man had sneaked into her room

The man was the security guard.

Minnie tried desperately to calm down

But her feet couldn't stop trembling

Minnie tried to escape but it was too late

Minnie woke up again and was tied up in an abandoned hotel building.

With a bottle in her hand

Behind her was the security guard who was holding her

But the effect of the ecstasy has not yet passed.

Raised the axe and prepared to cut off one of Minnie's hands.

Minnie struggled and knocked over the closet

The two were trapped together

At the critical moment, Minnie pushed the security guard as hard as she could

The guard's head hit the nail and died

The murderer was finally brought to justice.

After that, Minnie continued to live a quiet and lonely life.

No one bothered her in the middle of the night.

But she still habitually looked under the bed.

This article was published by the #author at #Time on the #website name, if in doubt, please contact us.
本文链接：https://www.toomic.com/movie/302.html