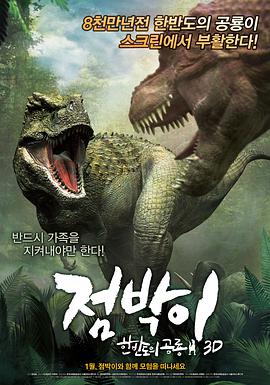 On the night of a full moon

A little Tyrannosaurus rex broke out of its shell

Because he had a unique birthmark on his face

It was like a small spot on the moon

Therefore, he was named Little Spot

Our story begins with this little dinosaur

It was 80 million years ago, in the late Cretaceous period

The era when dinosaurs ruled the earth had begun to decline

However, they didn't realize that danger was approaching them

He also had three siblings

Every day, she takes her children on a prey patrol.

They are the top of the food chain.

No animal can shake her dominance.

But now Spot is only one year old.

When the family goes hunting.

Spot can only stand and watch from a height.

A Cajun dragon is scared and runs away.

Then it was the twins' turn.

And with a final blow from mom.

They managed to hunt for food.

The family is working perfectly together.

Spot comes over to join in the fun.

After eating, the little pterodactyl cleaned his teeth

And Spot went to play games with his siblings.

It was the happiest and most carefree day of Spot's life

When his mother was asleep

Spot followed his siblings to the forest to explore secretly.

He found a fluffy vole

When he was playing with them

He accidentally ran into a scythe dragon that ate pebbles.

They eat rocks to help them digest.

And they are very vicious.

Luckily he was no match for his brother

In the distance, there was a Red Tyrannosaurus with one eye missing.

No one knows where he came from.

He's got his eye on a tickling nail dragon.

You can't catch it with your bare hands.

He actually knows how to kill his prey with a rock.

He ran up to the Cajun dragon and hissed.

But he didn't know it was louder than him

There was a large group from the other side.

Mom saw that something was wrong.

She went to help Spot.

Spot was in a panic in the crowd of dinosaurs.

The brother was trampled to death by the dinosaurs to save Spot.

The dinosaurs were frightened.

Dinosaurs kept falling off the cliff.

In the face of an uncontrollable herd of dinosaurs

Even the most powerful Tyrannosaurus rex

They can only be impacted by them

Eventually the twins also fell off the cliff

After everything calmed down

He wanted to kill Spot's whole family at once

She had already spent too much energy.

He wanted to help.

But his mother told him to go.

Eventually, Spot's mother was pushed off the cliff by One-Eye.

Spot's world collapsed at this moment.

One-Eye became the master of this place.

And Spot became a lost dog.

Although Spot was sad.

But he knew that the most important thing now

was to learn to live on his own.

On the top of the cliff

Spot found the nest of a pterodactyl.

Stealing eggs may be the easiest way to fill your stomach.

But it could also attract a pterodactyl attack.

Spot was almost stabbed to death by his pterodactyl mother

Luckily, he jumped into the river just in time.

After a long day's work, we had nothing to eat.

We'll have to wait until tomorrow to figure out what to do.

In the morning, Spot picked up a bone.

It was too hard to bite down on.

One-eye picked up some delicious meat

While One-Eye went to drink water

Spot rushed to steal the food

Spot rushed to take the food and ran away

One-eye could not enter

Although it was dangerous, he survived

Yet he still couldn't get his revenge

He tried to get Scythe Dragon and One-Eye to fight.

But the scythe dragon with a big weapon

But his IQ was too low.

He was stuck in a tree and became meat on a plate.

In the end, the scythe dragon also burst

One-eye was enjoying his meal.

The smell of blood attracts another

It didn't take long for Blu to come back

Looking at the scars on Blue's body

Spot gave the meat leg to Blue to eat

Since then, Spot had his first friend

And also a girlfriend

He followed Blu out of the forest for the first time

The world outside is so big

There were dinosaurs with long necks

And little pterosaurs that eat lice in the forest.

They already had their own territory

With the help of Blue

Spot had become the king ahead of his time.

But Blu knew they were still too big for each other.

The two of them started to move again

Finally, under the volcano

They found a hot spring

Here they lived in peace for another ten years

By now, Spot was an adult.

Alone, he could easily hunt a bullhorned dragon.

He also brings his wife a takeaway to eat

He is a good husband at home

It washed Spot into the river.

The killer was the one-eyed one back then.

It turns out that this guy has been hunting for Spot

Poor Blue became the object of his revenge

Bambi climbed up from the river and fought with One-Eye again.

This time he could not give in

One-eye swatted him away

The scene of his mother's death came to his mind.

Spot exploded into his own little universe

He actually dropped One-Eye for the first time

After One-Eye ran away.

In the following days

Spot and Blue were ready to raise their offspring

And a little pimple with a little spot

Spot also watched the children play in the sun

Life may be a struggle.

With the eruption of the volcano

The former home was once again hit by a flying disaster

All the dinosaurs once again began to flee.

It's a mother's instinct to protect her children unconditionally.

In order to protect their own children

By the time the family reached the end of the continent

There were only two little cubs left

Suddenly, the one-eyed dragon charged at the two cubs

He threw the little pimple's brother into the sea.

This time, Bumpy had to end One-Eye once and for all

The old One-Eye was no match for Spot.

But he slapped Little Pimple away!

So Bambi rushed One-Eye into the sea, ready to end the fight!

But after One-Eye fell into the water

He was still thinking of killing Little Pimple.

Bumpy had no choice but to jump into the water to fight!

The two overlords were fighting fiercely in the water

But they attracted the real boss of the water, Neptune Dragon

In the end, the unbeatable One-Eye

was taken as a lunch box by the dragon

And with a small lump in his mouth, Spot

He swam desperately to the mainland

Until he took his last breath.

They arrived on the Asian continent of China.

They would start a new life here.

That will be the story of Bumpy and Pops

This article was published by the #author at #Time on the #website name, if in doubt, please contact us.
本文链接：https://www.toomic.com/movie/307.html