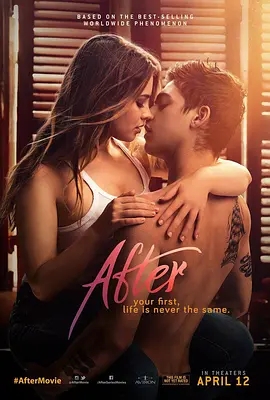 He is a playboy who only talks about flings

But when he saw the girl in front of him

suddenly found someone behind her.

(You seem to be in the wrong room.)

(Well, can you go out in the hallway and let me get dressed?)

(Don't make a fool of yourself. I'm not looking at you.)

It turns out that Carl is a friend of Mei's roommate.

The roommate invited Mei to a party tonight.

Mei had never been to any party before.

But Carl's taunting words forced her to calm down.

He says he will definitely go.

As he leaves, Carl looks up and down with contempt.

At the party Mei shows up in a rustic red dress.

When it was Mei's turn, she chose Dare.

The guy said from the sidelines

Hearing this Carl stood up excitedly

He stared into Mei's eyes and slowly approached

The handsome Carl made Xiao Mei a little nervous

He had never been this close to a boy before.

(I don't want to play this game)

For the first time, Carl, a playboy, was rejected.

And it was all recorded by the roommate next to him.

（"Harding, Scott got rejected for the first time.)

This dare was the beginning of the love affair.

At night while sleeping

She couldn't understand what was wrong with her.

The next day in class

Carl was the last one to arrive.

He was seated not far from Mei.

The teacher was discussing Pride and Prejudice.

The concept of love in this book

Love is just a transaction

We are all ruled by our desires

Without desire love is nothing

But Mei immediately raised her objections

Then the two began a heated debate

Mei was clearly pissed off

Carl, on the other hand, was having a good time.

(It was exciting just now)

（"Listen, whatever you have in mind, stop)

Mei says we're not going to make it.

(We? Aren't we talking about Pride and Prejudice?)

She complained to her friend Blackie

He has money in his family

The next day Xiao Mei came to the cafe

Looked back at Carl also sitting there

The moment her eyes met, she immediately dodged

But Carl immediately changed the subject and said

(Carl said I want to take you to a place)

（"I think it's best if we keep our distance)

And so Carl drove Mei to

Without waiting for Mei's consent, he took off his clothes and jumped into the lake

It only took a few days

Took away the girl's first kiss

In the evening when they were meeting.

The girl next to Carl kept hitting on him.

Mei was expecting Carl to open up about their relationship.

But the next thing she knew, Carl was telling her to wait for him.

（"Are you embarrassed that they saw us together?)

Mei looked at Carl with disbelief

（"I'm happy to be with you, but I don't have a girlfriend.

Mei was in a complete panic.

But I could see in Carl's eyes

This is not his intention

This night she attended a fire party

I didn't expect Carl to be here.

At this time, the crowd played a game of sucking paper pieces

When it was Xiao Mei's turn

The man played a rascal

He blew off the pieces of paper on purpose

Xiao Mei did not want to

But the man continued to be relentless

After Carl saw it

Then left without looking back

Xiao Mei did not worry

Here is already a mess

After leaving you, Carl drank all day long

He destroyed everything he could in the house

We don't know what's wrong with him.

I hope you can talk to him.

Then Mei found Carl by the pool.

He was going to pick up a broken bottle.

But his finger was cut.

But he can't see Xiao Mei hurt at all

Looking at each other's eyes

The two just came together again

By the river, they played and frolicked

Snuggling and reading together in the library

Confessing their love in the oceanarium

When he dropped his hand

A clean and elegant room came into view

This room became the beginning of their life together

In his eyes, his father was a jerk.

His father was drinking and messing with the wrong people.

These people came to the house and

In front of his own face bullied his mother

Underneath Carl's strong exterior was a lonely and fragile

Inadvertently, she was already the support of Carl's heart

Carl's phone with warm messages from others

But Carl did not have any explanation for this

（"What's wrong with going out?)

（"Of course I believe you)

（"Then why are you worried?)

The girl found warm messages in her lover's phone

At night, her lover had not yet returned home

Carl said the text message had no meaning

It was sent as a joke

After saying that he was going to take Mei back

But then Carl's suitor stopped him

He took out his phone and showed Mei a video

（"This is my dare: make her fall in love with me)

Hearing this Mei was instantly frozen in place

Carl's suitor also forgot to add fuel to the fire

Said this is just a game

Tessa you must believe me

Tessa, that was all in the past.

It was before I got to know you

She looked around at her friends

She could see in their eyes

（"That was all in the past)

（"You snapped your fingers and dumped me)

Xiao Mei turned around and disappeared into the rain alone.

Looking at her back.

Carl knew he had screwed up.

In the time that followed

The two of them never contacted each other again

Mei spent all her energy on her studies.

But Carl was always in a state of regret.

Sitting alone on the rooftop, reminiscing with Xiao Mei

It was the day of graduation.

The teacher handed over a paper to Xiao Mei

It was Carl's graduation thesis.

(I think it was written more for you than for me)

And a portrait of myself

Before this, I never thought I would be

Showed me that whatever our souls were made of

hers and mine are both the same

You once asked me who I loved most in the world

After I met you

I did a lot of things that I did not understand

But because I met you

Seeing what I wanted.

He did lie to her.

More than that, he was in love.

Love is a poison and an antidote.

Truly, he finally touched her.

Every love goes to the end.

When I was a kid, I thought love should be like this

Titanic like a blast to not waste this life.

Three days is enough to remember a lifetime.

But after growing up, I found.

Simple and ordinary is good.

Companionship is the longest confession

Thank you for your attention.

This article was published by the #author at #Time on the #website name, if in doubt, please contact us.
本文链接：https://www.toomic.com/movie/312.html