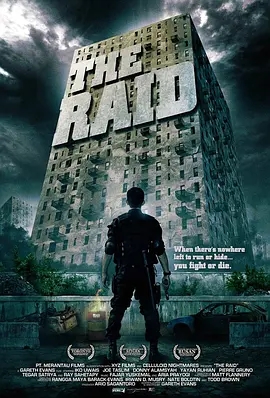 This is definitely one I've seen.

It lasted almost an hour.

The fight scenes got my blood pumping.

After watching the whole movie, I'm sure

You'll be as overwhelmed as I was

There is one in this building.

A drug lord with his hands in the air

In the last decade or so

The police were ready to seize him.

But failed many times.

All those involved in the siege were brutally murdered

in the early hours of the morning

And managed to throw down the observation post on the first floor.

to control another man who was about to

home to the man with glasses.

And the spectacle man claimed

himself as a good citizen

but no one dares to believe it.

Because they all know that most of the people here

are suspects and outlaws.

The police, in order not to hurt the innocent

Then everyone started slipping into the building.

Empty all the rooms on the first floor.

Arrange through the layers

The team arrived at the fifth floor.

Just as they were about to move

Corridor suddenly came out of a little boy

The little boy was still yawning

Turned his head and found the SWAT team

At that time was confused

And the SWAT team was also very nervous

The captain told him not to move

But the boy suddenly turned around

Opened the door and ran out

And the white hair police officers fear that the news spread

Immediately shot but it was still too late

The news was passed on to the boy.

6 floor responsible for the wind people

And at that moment the bullets of the white hair officer

came through the door

The boy was killed instantly

Special police rushed to catch up

Just at the moment of catching the boy

At this point the special police officer face showed

Because he realized that the surprise attack

had turned into a strong attack

And now the nightmare was just beginning

Inside an armored car

The two SWAT officers in charge of the pickup

The other one looked outside the car

only to see three men walking in a neat

pace slowly walking towards them

One SWAT officer heard the screaming outside

Ran to the window to see

The next second, he received a lunch box

And at that moment, the man they had under control

The bandit used his long hidden

Succeeded in pulling out his hands

Pulled out the machete hidden under the table

He killed another SWAT officer with one knife

He then ran to the 5th floor corridor

With a gun hidden behind him

While running and screaming

Raised his hand and shot

The drug lord turned off the lights in the whole building

The lights in the building were turned off.

It was dark inside the building.

Officer Whitehead to call for backup

It turns out that this mission is all

No one outside knew about it

At this moment, the gun battle was about to start

Because the enemy firepower is too fierce

The SWAT team retreated to a room

Moved the objects inside the house to hold the door

A SWAT officer went to the window sill to check

But received a box of food directly

Xiao Shan picked up the axe

began to frantically smash the floor

Suddenly there was no movement outside the house

Then there was a barrage of fire

Everyone rushed to jump through the hole

A large hole in the room and jumped down

Cleared the room of the bandits

But soon they were surrounded again

A team member grabbed an axe

Tried to smash another hole

And was beaten into a sieve

Then Xiaoshan took the gas tank

Take out and turn on the gas

Put it in the refrigerator

Take out a grenade and throw it inside

After clearing the enemies surrounding them

The captain told Xiaoshan to hide the wounded

Xiaoshan was going to hide Ulla in

But as soon as they reached the 7th floor

They were surrounded by a group of people

He took Ulla and found the man with glasses

The glasses man hid them both in the

In the mezzanine of the video wall

He went out to look for other team members

Just outside, he ran into a group of drug dealers

After finishing the group of drug dealers

He ran into his brother

Now he is one of the drug lord's

One of his right-hand men

But blocked the retreat of the SWAT team leader

And arrogantly put his gun down

To fight with the captain

It was a flying elbow

followed by a whip kick

Grabbed the captain's leg and spun

Turn around and then a top

The captain instantly BG down

The captain slowly climbed up

Ku eat is so a little

Then grabbed the captain's head

The captain so BGS

Then dragged the body of the SWAT team leader

Walked to the elevator and ran into Dasan

By now, the drug lord knew

Dasan was an undercover agent

He deliberately let him extend his hand

Then he took a look at the madman

One kick sent Dasan to the table

The drug lord picked up the knife on the table

A single thrust into Dasan's hand

They discussed the need to capture the thief first

Just as the three of them went to the 15th floor

To catch the drug lord

The madman took a look at him and turned Dasan

walked to the middle of the two

A big fight was about to start

After a few hundred rounds of fighting

But the crazy man always had the upper hand

By this time, the two had no more resistance.

The madman picked up Oyama was about to strangle Oyama

Brother saw it and picked up the lamp on the ground.

Then Xiaoshan followed by a combination of punches

Then a generation of vicious madman

With one shot, he finished off the accompanying

Then forced the drug lord with a gun to take him out.

At this point the drug lord told White Hair

He had been in contact with senior police officers for a long time.

The operation itself was a trap.

You succeed in getting out.

You will also be assassinated.

White Hair, who wanted to know everything

Then put the gun on yourself.

Prepare to kill yourself.

But there is no bullet in the gun.

and with Ulla pressing the white hair

walked out with the brother's escort

and the brother chose to stay here.

Because he was used to

This article was published by the #author at #Time on the #website name, if in doubt, please contact us.
本文链接：https://www.toomic.com/movie/319.html