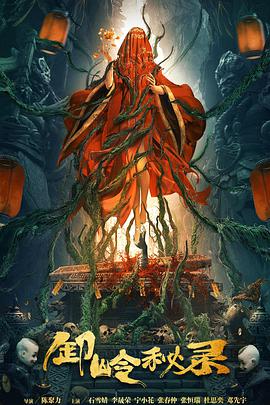 The school of Shuiling originated in the Northern Song Dynasty

It emerged in the Yuan Dynasty.

During the chaotic times

Often took treasures from the graves of big officials or nobles.

They helped the people to rob the rich and help the poor.

Time came to the period of warlord chaos.

The villagers in chaos had nothing to eat

In order to keep the villagers from starving.

Uncle Jiang, the contemporary leader of Discharge Ridge, and his nephew Ayu

decided to take treasures from an ancient tomb in the mountain for food.

They lifted the coffin.

Unexpectedly, there were two clay figures inside.

and some worthless burial goods.

turned to them in a bizarre manner.

Then from underneath them crawled out dense spiders.

The spiders were crawling more and more toward the crowd.

Some of them had already

crawled up their bodies

ordering people to throw fire sticks into the grave pit.

There was still a hole in the pit.

They climbed into the cave.

Finally the entrance was seen.

Looking at such a massive underground stone door

Uncle Jiang concluded that there must be treasure inside.

So they lit the incense as usual.

Then pushed open the stone door

Let go of the rooster.

After making sure there was no poisonous gas

The crowd then cautiously walked in

What they didn't expect to see was a giant stone monument

So this is the legendary Xu Fu's tomb

Just as the crowd continued to explore

Ayu stepped out of the way and fell into the pit

The ground is full of weird clay dummies

But this is not more horrible

After the crowd lit up the surrounding area

They found that the stone walls around them

There were coffins all around

At this moment, a brother was suddenly pulled away by something strange

Then some unknown liquid kept dripping on their heads

Suddenly a giant spider monster fell from the air

The crowd fought against it, but they didn't expect there to be more than one giant spider.

In the end, only Ah Yu escaped with the injured Uncle Jiang

In folklore paper tying has always followed a

If you paint eyes on a paper-tied person

The paper tied person is endowed with spiritual energy

It will attract ghosts to the body

But this woman did not believe in evil

She wore a red wedding dress

Waiting for the groom in the pile of paper people

It turns out that this woman's name is Gu Lin

She was waiting for her husband whom she had never met

At that moment, someone carrying the injured man

Ran into the house from the side

It was Ayu and the three of them

She told him to marry her right away

It turned out that she and Ayu had been

They had been engaged to each other since they were children

Now that her brother is dying.

Gu Lin urgently needs a bride price to save his life

But now Uncle Jiang is dying.

Ayu couldn't care less about her

Just when they were in a hurry

The warlords suddenly came to the door

It turns out that they also heard

They also wanted a piece of the action

But the leader, Uncle Jiang, was in danger

The brothers were all buried in the palace

Xiaoyu hated and feared there

He refused to go back

But the warlord marshal lifted the betel board

He used the life of Ayu's second uncle inside as support

Although Ayu was furious

But he could only grit his teeth and agree

The group returned to the underground palace

Along with the disappearance of the

The poetic bodies of the people of the Shou Ling school

As if there had not been any fight in general

But the marshal does not care about this

He saw so many coffins

He felt that he was going to be rich

He quickly called his men

Take all the valuable things away

The money-obsessed soldiers vandalized them everywhere

Kicking and slapping at the coffins

After removing the golden locks, the clay figures

They were thrown on the ground randomly

A sense of foreboding became stronger and stronger

He was planning to sneak in with his men

But it was too late

And there were more than the ones that came up

A large group of people were killed in an instant

At the critical moment, Ayu used the secret method

To find the exit into the life of the place

With the people lucky to get into a disaster

The marshal lost a lot of money

When he arrived, there were dozens of his men

But now there are few people left

We had no choice but to continue

Deeper into the underground palace

They say don't count when walking in line

This long-haired captain does not believe in evil

Because he has not been counting the right people

When he wanted to ask his teammates in front of him

But then he saw

The long-haired captain was stunned on the spot

He raised his hand and shot

Several people in front of him thought they were in danger

Not long after a few more people fell

Long Hair was also knocked to the ground

When the crowd quieted down

found a few spiders crawled into the body of Long Hair

Long Hair came to life in a strange way

Ayu realized that this spider

may be able to save the life of the second uncle

He wanted to catch Nagumo to find out what happened

But Nagumo got up and ran very fast

In a short time, he disappeared

And the people who were chasing after him

But they were led into another underground palace by mistake

Legend has it that Qin Shi Huang sent Xu Fu

To find the elixir of immortality in Penglai

But Xu Fu did not complete the task

Instead, he secretly returned to Langya Mountain

Ayu, the young master of Shuo Ling, led the people

came to the depths of Xu Fu's tomb palace

His idea was to find the treasure quickly

He impatiently pushed open a coffin

He didn't expect to see himself lying inside

Others opened it one after another

He didn't expect that these coffins

They were all filled with themselves

The crowd was terrified

Gu Lin was the first to run away

followed by Ayu and Da Zhuang

could not resist turning around and running away too

Realizing that something was wrong, Marshal

quickly led the men to catch up

but did not expect

One after another happened

During the fight, Dazhong and Marshal accidentally fell into the water

When the men went to fish

but only a clay dummy was found.

Marshal and Dazhong all disappeared

Ayu, who was left alone

He met the ghosts of the Brothers of the Demolition

and a lot of children

Ayu was asked to stay with them

On the other hand, Gu Lin, the bride who escaped alone

Surprisingly, she met what seemed to be Xu Fu's dry corpse

She was caught and forced to marry him.

The two runaways met by accident

But the strange thing is that both of them

Neither could see anything in the other's eyes

This makes Ayu realize that they are in an illusion

To wake up from the illusion

There is only one way

That is to jump from a height

But at the critical moment

Ayu fell off the cliff alone

His body was covered in cobwebs

There were several others around him who were also entangled

Tearing open the cobwebs the rest of the people were inside

No one knows what happened.

Ayu guessed that the floating objects in the tomb just now

had a hallucinogenic effect.

If we want to get out of here.

We had to go to the main chamber to find a chance.

But after everyone pushed the door in.

Found that there is only a huge ancient well.

Everyone climbed up to look inside.

I didn't expect the vanished Shaggy to be standing inside.

In the red liquid under his feet

There seemed to be something else stirring.

Suddenly, a huge man-eating flower broke through the ground

Taking a man with its tongue.

Standing in front of a store full of paper ties.

Waiting for the groom who couldn't wait.

There's love in the chaotic world of Dismounted Ridge

Fetching treasure to save others, unfortunately in danger

Thanksgiving for the moment in a time of prosperity and peace

This article was published by the #author at #Time on the #website name, if in doubt, please contact us.
本文链接：https://www.toomic.com/movie/328.html