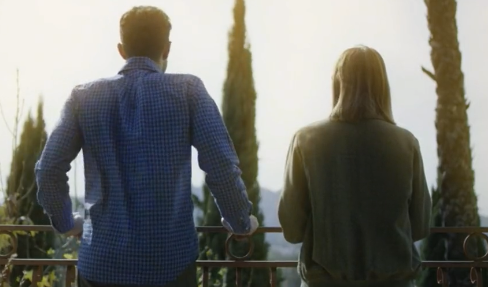 Man and woman spend quality time together on the balcony

The woman puts a piece of paper with words

In the man's mouth

The man closes his eyes and is intoxicated

But then the woman, with a ballpoint pen in her hand

Inserted into the man's mouth

The latest amazing movie devotees in 2021

Let's go to the main movie

The man was awakened by shock

It was just a dream

The man is now unlucky

His foot was injured and he lost his job

The baby he was about to have was aborted

Aborted by his wife who is a believer

The two of them have been having a lot of trouble

No wonder the man was having such nightmares

to lighten the mood

At the end of the night

The woman changed into a sexy dress

and the man danced in a lively way

But she did not allow the man to touch herself

And intentionally knocked down the man

And then the woman squatted down

Twist it with force

The man passed through the pain

The man woke up again

The upper foot has been re-bandaged

In the bathroom, he did not realize that

The door of the bathroom was opened secretly

The man finished washing up

He found a WY on the sink.

The man was furious

He asked the woman since you believe in this religion

I'm tired of pretending to be a god every day

The woman was still arguing

I didn't give you this mask

The devil must have given it to you

You've got something on your mind.

Go away, you crazy bitch!

But he found the broken glass vase

Self-abuse of bruises all over the woman

The man knew that the woman must have gone crazy

This series of strange and bizarre behavior makes

The man was uncomfortable

But he has to make do with his life. Early in the morning

The man finds a small bird crashed to death in front of his window.

This is very unlucky

And at the same time, there was a knocking sound in the basement.

The man came to the door of the basement with a twist.

The banging inside seemed more urgent

He tried to open the door

But the door was locked

Suddenly the woman appeared beside him at some point

The man asked what was going on in the basement

The woman did not answer

Looked straight at the man

The man was a little annoyed by the look

I want to go to the police

I didn't expect the woman's reaction to be more intense

She SS holds the man's leg

The man is barely able to shake off the woman

The woman got up again and grabbed a bucket of disinfectant

If you call the police, I will drink him

The man came forward and tore with the woman

As a result, the woman was knocked against the wall and passed out

Suddenly there was a knock on the door downstairs

The visitors were the woman's parents

The man did not seem to know the two of them

Apparently the woman did not tell the man

The man felt sorry for them

After the old couple left

The man went upstairs to see the woman

Luckily, the woman woke up

The man told the woman that her parents had come

and promised to invite them for dinner the day after tomorrow

The woman's face was full of surprise

My parents are long dead.

You forgot and showed the man the photo

No, no, the woman said no one had been here earlier.

The man was a bit angry

If you say no one was here, who was it?

The woman said it was the devil.

Look at the crazy woman again

The man had to take out

The old couple just left him the paper with the address

But the address written on it

The address written on it disappeared

The man felt that the problem was serious

Could it be that he was hallucinating?

Either that or the woman drugged herself

Undeterred, he went to the basement again

Ready to find out what happened

But he was attacked by a woman hiding in the dark

Injected with the drug

By the time the man woke up, it was morning

But all he felt was weakness

The world was spinning

It was as if the man was under a spell

He did whatever the woman told him to do.

The woman told the man

The two demons will be here tonight.

You have to kill him at dinner.

At dinner the old couple asked about their children

The woman is very upset when she hears this

She excuses herself and leaves

The old couple asked the man again where the child was.

The man said that the child was aborted

And the old couple repeatedly confirmed

whether the man had seen it with his own eyes

Pressing them harder and harder

Suddenly they heard the woman's voice

Kill them and then burst up

To the old couple is a burst of output

The woman hiding downstairs was dancing with excitement

The men regained their senses after a bout of abuse

The old woman, who had fallen in the blood, finally told the man

Your son is in the basement

After that, she didn't breathe.

After hearing this, the man ran like crazy to the basement

He smashed open the door of the room

A wooden box was placed in the middle of the basement

When he saw the contents of the wooden box, he was dumbfounded

A man slowly crawled out of the crate

It was a man who looked exactly like the man

The woman said to the man in the crate

"We are going from mother and son to husband and wife.

Go ahead and kill everyone in this house who hurt me.

Then a hammer was placed on the floor

There was a scream in the basement

This is a film about

This is a story about the ethics between the Creator and the creature.

It is a very deep subject matter

and yet the plot is messy

After watching it, I have one feeling

What I want to say to the director

One thing I want to say to the director is

Hang in there will definitely have the effect

This article was published by the #author at #Time on the #website name, if in doubt, please contact us.
本文链接：https://www.toomic.com/movie/364.html