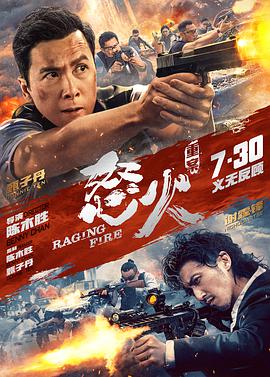 This is the latest Hong Kong movie box office champion

All kinds of classic Hong Kong film elements are available

This is the co-starring of Donnie Yen and Nicholas Tse.

In the middle of the night, Rico leads a team to a shopping mall

He was tipped off that Rollers and Vietnamese would be trading D products here.

Everything was under control.

But the appearance of a group of masked men disrupted the police plan.

The masked men suddenly attacked and stabbed the Vietnamese and his brother.

This man was so skilled and precise that he was able to kill them in seconds.

The masked men killed the Vietnamese, and then attacked the drug seller Roller.

There are not many of them, but they are all ruthless and ruthless

They are all ruthless and relentless

Brother Alex heard the gunshots and led the team to the scene and joined the fight.

In the end, only one man, Rico, was left with no more ammunition

When Allegra's colleague and good friend, Lord Bong, came to save the day, it was too late.

In fact, Boss was supposed to go on a mission with Rico

But he was temporarily disqualified because he had offended the leader.

In terms of case handling ability, Master Bong is the absolute best

In terms of human affairs, he always mishandles them

He is a straightforward and upright person

He does not flatter his superiors, nor does he bow down to the powerful

Therefore, he was often treated badly for not giving face to the leader

The death of Brother Allegra made Lord Bong blame himself and feel angry.

He is determined to find the murderer and bring justice to his brother.

After many days of investigation, the master finally found a clue

They found Roller's drugs in the night club.

Kun was killed by the masked man, but the goods were in the hands of Big Brother, so what?

And the reason why the masked man must kill the police

In fact, because between them and the police force

There is an unpleasant feud

In fact, the masked men are all police officers, and the leader is named Qiu Gang Ao

Ao is the star of the future of the police force, and the master of the two men are also teachers and friends

One day, 4 years ago, Mr. Fok, a wealthy businessman, was kidnapped.

Master Bong and Ao led the team to rescue the hostage, Ao was responsible for chasing one of the kidnappers, Coke

On the way, they received a phone call from the leader, Szeto, because Mr. Fok was of high status

So we have to rescue Mr. Huo at all costs

That is, Ao can let go of the work, he covers the accident

So under the instruction of Stuart, Ao and the five brothers violently forced to confess

Coke finally spoke up, but one brother's insults angered Coke

In a hurry, Ao beat Coke to death with a stick

This scene was seen by the subsequent arrival of the owner

In the court, Mr. Fok who was saved did not show any gratitude

The only eyewitness, Mr. Bong, as long as he said one thing

He did not see the violence to force the confession

Ao and his brothers would be acquitted

It's not that Lord Bong didn't want to help his brothers

Rather, his life's creed does not support him to lie

He is not wrong to tell the truth

He is not wrong to insist on justice

But we just feel as if Lord Bong is wrong

Among them, Brother Bill committed suicide by jumping off a building because he was too humiliated

After that, Ao and the other four brothers went to prison

Four years of prison life made Ao suffer a lot

After his release from prison, Ao had several "clown" scars on his face

There is a sinister and chilling look in his eyes

Obviously, this is a blackened version of Ao from hell

From then on, he and his four brothers put on masks and began to revenge

The target of revenge is, of course, all those who are related to their imprisonment

Including Szeto, including the master

It is expected that Brother Ally is also one of them

Now the identity of the elder brother is revealed

The two of them will act at the same time

First look at the master, he has the courage to break into the dragon pool alone

One person alone against 100, but in the midst of thousands of horses

The big brother to fall out, 2 from the upstairs to the building

See the big brother is about to escape, a car came flying

Big Brother was hit and killed in the street

Is this an accident? Of course not

This is Ao's Roach cicada, the yellow bird in the back

The clue of the elder brother was just broken

One of Ao's brothers, the son, revealed himself again because of a young lady

The police judge that since the son is a major suspect

Then Ao could not be unrelated to this

But Ao's other brother, A-hwa, was arrested

So he was only imprisoned for 48 hours at most

As for the brother's brother

Ao will never be soft, because he has said many times

Once the son is dead, the clues are cut off

The next step is how to rescue A-hwa

Or how to make A-hwa survive the 48 hours

After Ao finished the two preparations, he took the other two brothers to the police station

What to do? To report the case

To report the disappearance of his brother's son

As soon as they heard it, the police knew that Ao had killed him

But what can they do without evidence?

As long as he didn't talk, nothing would happen.

In the suicide note, he prepared all the crimes for one person

He smashed the camera and fought with Ao.

It was the first time in 4 years that he heard Ao's true voice.

At this moment, Bao rushed in and said that the owner's wife had been kidnapped

Yes, this is Ao's second-hand preparation

The master went to the kidnapping site

This time, the kidnapper is also a familiar face

The same Szeto who gave Ao a guarantee back then

Ao used his wife and son's life as a threat to Jie, and he had to take the bomb from

tell the truth about that year, he would be saved.

The bomb's countdown was synchronized with Szeto's pulse

If the pulse beats, the countdown continues.

If the pulse is still, the countdown stops.

Apparently, this is the Church's tailor-made multiple-choice question for Lord Bond

Now your wife's life is in your hands

If you want justice, your wife dies.

If you want your wife, you have to kill her.

Master Bong is in a dilemma, and his superior has ordered everyone to evacuate

The boss disobeys the order and shoots at the SWAT team

Finally, in the face of his wife's life and death

He wanted to cut the wire and take a chance, but his superiors would not let him do whatever he wanted

With one shot, Stu was killed by a frustrated shooter.

The pulse disappeared, the bomb countdown stopped, and the crowd was relieved

It's really Ao's style, no matter how you choose, I will not let you go

The master breaks his hand and rushes out with his wife

The bomb exploded and two people fell in the rubble

Luckily, his wife's life was not in danger

But Mr. Bong was taken away by the Internal Investigation Division

He shot at the police, disobeyed orders, and acted without permission.

Although he was trying to save the lives of others

As soon as the interrogation started, Brother Bao led a team to stand up for Master Bong

When the master was in trouble, the brothers and sisters stood together

But when Ao was in trouble, there was no one to help

Not only did his teammates help, but the presiding officer Hua was also willing to let him off the hook

On the other hand, Ao was full of ambition

Brother Kwong is responsible for weapons and intelligence, while Ao is in charge of the operation.

However, because Ao's identity was exposed, Brother Kwong wanted to find someone else.

If this is the case, I'm afraid that Brother Guang is not far from death

Sure enough, Ao took away all his weapons and information, as well as his head

Afterwards, the police found a blue flash drive at the scene

It contains the security records of Bank A

In fact, this is Ao's "smoke screen", his real target is Bank B

The same Mr. Huo who was indifferent in the court

Ao's move is not only robbery, but also revenge, killing two birds with one stone

Therefore, Mr. Huo still had to die after living for 4 more years

Ao and his brother returned home in triumph, but unexpectedly met the master in the street

The police gang was still waiting in Bank A

After a fierce chase, the two sides start a firefight in the street

The scene is big enough, the firepower is enough

With more and more police officers, the situation began to be unfavorable to Ao

So Ao pulled out a grenade and prepared to retreat

In the midst of the chaotic battle, all three of Ao's brothers were killed

In the end, only Ao himself was left to fight to the death with Lord Bong

Master Bong shows his bat and Ao pulls out his butterfly knife.

At this moment, we seem to dream back to "The Wolf

And more eye-catching is Nicholas

He dances with the butterfly knife like an assassin's shadow, which is unpreventable

He grabbed the sledgehammer like a tarzan, very shocking power

How to describe it? Absolute son

After 5 minutes of battle, Ao was defeated.

And even though the master won, he was not a bit happy

Now things are different, Ao's hands are already stained with blood and there is no way back

They could never go back to the old days

But now he already understood and appreciated Ao's choice

In the end, Ao leapt backwards and let the steel bar pierce his body

He ended his tragic life in the embrace of Our Lady

This is the story of "Fate of the Furious".

In the previous police films of Donnie Yen, he was always the absolute protagonist

But this film is not quite the same, because the villain played by Jian Feng is too strong

Face with a wound, heart with anger

Fist to flesh, knife to blood

Although not a practitioner, but also insist on personal combat

What is more important is that he plays a three-dimensional, complex villain

It is the pressure of power, the failure of love and righteousness

Before he was imprisoned, he was full of ideals and his eyes were full of stars

After his release, he was addicted to killing and had only revenge in his heart

Out of reason, we can't support the crime

Out of emotion, we sympathize with his suffering

It seems that in some moments, we hope this villain can laugh until the end

And this "Fate of the Furious

If there is no accident

Kin Fung will be nominated again next year, and even win the Golden Film Awards

Let this label continue to be passed on

This article was published by the #author at #Time on the #website name, if in doubt, please contact us.
本文链接：https://www.toomic.com/movie/365.html