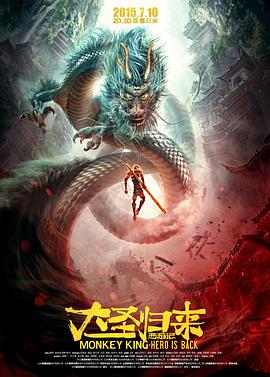 A movie, a life

Hello everyone, today I bring you a Chinese animation

Journey to the West: The Return of the Great Sage

500 years ago, Sun Wukong was displeased with the Jade Emperor and caused a big trouble in the Heavenly Palace

So Buddha sealed him under the Five Elements Mountain

In a flash, five hundred years have passed

In the picture, a father is telling his child the story of the Monkey King

But suddenly, a mountain demon attacked, and the father tried his best to resist

But how can a mere mortal body defeat a powerful mountain demon?

In desperation, the mother jumped off the cliff with the baby in her arms

The baby drifted down with the river and was saved by an old monk who took him in.

After growing up, Little Liu'er worshipped Sun Wukong and regarded him as a hero

One day, the mountain demon attacked the village

As a result, he was chased by a large group of mountain demons

In the panic, Little Liu'er and his master got separated

And he went into a dark cave by mistake

Little Liuer touched the ice out of curiosity

Unexpectedly, the blood on his hand accidentally lifted the seal on the ice

The ice then broke and a monkey emerged

This is the legendary Sun Wukong

After 500 years of being suppressed, he could finally come out and stretch his muscles.

He followed him closely and could not get rid of him

Chattering and asking him a lot of questions

But he could not get rid of him

Can only reluctantly answer all his questions

But then, a huge stone monster suddenly appeared and blocked the way

By the Buddha's order, he was here to guard the Monkey King

Sealed power of the Monkey King is no match for this big guy!

Little Liu'er also fell off the cliff with the broken stones

Luckily, the Monkey King saved him

After this battle, Sun Wukong became closer to Little Liu'er

In the evening, the two of them grilled fish at the river, but met a pig

He wanted to seek revenge on him but could not fight

When passing by the cliff, Little Liuer accidentally woke up the white dragon in the water

The White Dragon opened its mouth and tried to eat him

At the moment of crisis, Sun Wukong stood out

And then angry reprimand little Liu'er put himself in danger

Then there was a long journey

In the evening, they arrived at an inn

Little Liu'er, who was very hungry, happily darted over

Little did he know that danger was coming

The demon king had already laid a net here

Inadvertently learned that the shopkeeper was a mountain demon

Fortunately, the Monkey King appeared in time to knock out the mountain demon

Then a large number of demons attacked, the Monkey King could not get away

The old pig took the children to escape

But then, the demon king suddenly appeared to capture the girl

Little Liu'er asked Sun Wukong to save her

But at this time, the Monkey King's magic power is sealed, is not a rival of the demon king!

After Little Liu'er left, Sun Wukong was depressed, he hated his own powerlessness

After some thought struggle, finally decided to rescue people

When he was about to be in danger, the master appeared in time to fight off the mountain demon

And accidentally fell into the cave of the demon king, and also stirred up the place to the bottom

At this moment, a white dragon in the mountain stream flew out

The task of saving people or rely on the Monkey King

Finally along with a cloud of smoke Sun Wukong showed up

He instantly became huge towards the demon king a rake down

The fight scene is thrilling

Finally the demon king down the cliff

Just when the crowd was happy with the victory

Suddenly the ground shook and the danger came again

The demon king transformed into a giant worm

The crowd was scared and fled everywhere

The original form of the demon king's combat power escalated

Sun Wukong was defeated without a fight

But still did not have time to stop the demon king

Looking at the little Liu'er buried in the rubble

Anger made him break the seal of magic power

In the end, Sun Wukong used the Golden Band to kill the Demon King

To return the world to a peaceful world

What about Little Liuer? Did he really die under the pile of rocks?

Because his mission has not been completed yet

He still has to go to the West to obtain the true scriptures, and then to universalize all beings

In the movie, Little Liuer was an orphan since childhood, although he was taken in by his master

But he grew up without a father's love, and without a mother's company

This makes him meet Sun Wukong, as if he found a long lost father's love

This reminds us that parents should give their children enough companionship

And don't let children become left-behind children in the mind

This article was published by the #author at #Time on the #website name, if in doubt, please contact us.
本文链接：https://www.toomic.com/movie/367.html