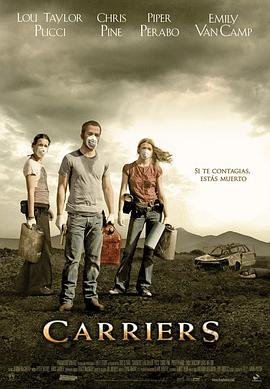 The film we brought this time we will call it a literary horror film, the depiction of human nature is still quite profound. The screen is playing back a video from long ago, the mother and twin brothers waving happily to the camera. The father also participates and has fun with the kids. The brothers are having a great time on the beach, chasing seagulls. The scene shifts, the two blue skies are connected to each other, the scenery gradually becomes clear, and time has come to the world after the virus outbreak. On the endless highway, a car sped past. Surfboards were strapped to the roof of the car, foreshadowing the destination to be visited. A picture of the two brothers as children was taped to the car glass. The two have grown up. The one in the blue shirt is the younger brother, Xiaoshuai, and the one driving is the older brother, Dajiang. The passenger seat is the brother's girlfriend, Ahua. And Xiaoshuai sat side-by-side with the woman named Ah Xiang. Driving a stolen Mercedes, four people in the world without a cure for the plague, hastily and warmly to the destination. At this point, a car on the road ahead of them to stop their way, the car down an uncle, brother alert to let everyone first close the windows. The uncle said while approaching, we do not mean any harm, just want to borrow a little gasoline. The little loli in the car peeked half of the head to look. In such an apocalyptic situation, the brother was not willing to help him. The older man still did not give up and said we could make a deal. Ah Heung saw that the little girl had been infected and spoke out to remind the crowd. The brother drove the car to try to escape the place. Seeing that the car was leaving, Uncle couldn't think of anything else and slipped a wrench out of his sleeve. The uncle swung the wrench to smash the car window. The brother was a good driver and got around the car that was in the way. The car drove away, leaving only the uncle's increasingly blurred figure. A flower sympathetically said, they will certainly die. Dazhuang expressionlessly said, everyone will die. Due to the sharp turn just now, the car began to leak oil, and everything drove away into the unknown. Under the post-apocalyptic survival, brother Dazhong developed several rules. Rule number one, avoid infection at all costs. Rule number two, 24 hours to fully disinfect what the patient has touched before it can be used. Rule number three, people who have the disease have no medicine, no sympathy, different lines. Just under this rule, four people have been able to survive so far. Not long after the car was running, a puff of white smoke came out of the hood. The brother took out a wrench to the brother, oil leakage caused the car burst the cylinder, it looks like only a wrench is not good enough to repair. The brother came up with a solution, the car just did not have oil. One of the two girls said that there were infected people in that car and did not agree to go back. The other said that going back was the best option. Several people were at a standstill. Finally, there was no other way, the crowd took disinfectant water and gasoline and went to find the car just now. Nearly close, four people cautiously put on masks. The older man first introduced himself in a friendly manner, his name was Lao Wang. The brother had a gun in his hand and went straight to the point saying that the car was commandeered by us. Lao Wang told him there were infected people in the car, and the brother said we had enough disinfectant water and would do a full disinfection. Lao Wang said he heard an announcement a few weeks ago that people were flocking to a school where the CDC had set up an emergency site where the new antivenom was available. The brother didn't believe Lao Wang. There had been vaccines before, and they hadn't worked. The brother came up with a solution. Have the father and daughter sit in the back of the car and then isolate it with a whole sheet of plastic wrap. They carefully wiped with disinfectant water. The brother threw out all the father and daughter's luggage. Drove the new car to the place where they broke down. Xiao Shuai strapped their own things back on the roof of the car, not forgetting to take the brothers' photo together. By this time the radio broadcast that the school was closed because of a virus outbreak. At the end of the day, Shuai tells stories about when he and his brother were kids. At that moment, the

This article was published by the #author at #Time on the #website name, if in doubt, please contact us.
本文链接：https://www.toomic.com/movie/390.html