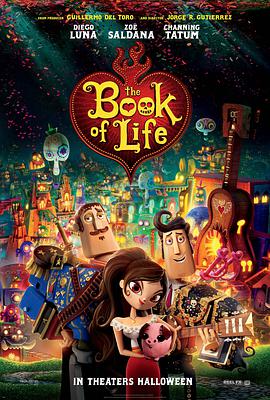 Today, we bring you a story about

Once upon a time in Mexico

There was a very prosperous town

And beneath the earth there was

A place of memory ruled by the goddess of death

When people died, they depended on the memories of their loved ones

And continue to live on in another form

Every year, the town is at its peak when the Day of the Dead is celebrated.

People sing and laugh together at the cemetery

As much fun as you want to have

However, underneath the place of memory

There is also a place of oblivion

It is ruled by an exiled god of hell

This day is the annual Day of the Dead

But he was refused.

After all, it was because he cheated on a bet

That's why he was banished to Oblivion

However, this time, he wanted to bet with Death again

In the distance, there were three children playing

The bullfighter's son, Pony, who was playing the guitar

Xiaohua, the son of the town hero, who was playing with a sword.

Both boys are secretly in love with her

Two gods are watching them from above

So they made a bet

To choose one boy each

When they grow up, they bet on who will marry the village chief's daughter first

If the god of hell wins

He would be in charge of the land of memory

But if he loses

Then he will never be able to deal with human affairs

And so, the goddess of death chose the pony

And blessed him with a pure and brave heart forever

And the God of Hell chose Hana.

Gave him a badge of invulnerability if he wore it

But later, because of Maria's fiery personality

got into trouble in the town

The village chief forced to send to learn etiquette

When he left, Pony was given a guitar by Maria

But as the heir of the bullfighters

And Xiaohua after various training

On this day, it was the first bullfighting show for Xiao Ma

After the baptism of life

She became a great beauty that shocked everyone

But the show did not go well

The audience was shocked

There was only the sound of cursing and jeering.

Only Maria stood up and applauded for him

However, the conversation was too awkward

It caused discomfort to the crowd

At that moment, Xiao Ma came downstairs to her room with his guitar

He sang a heartfelt song

Maria was fascinated by it.

Even the townspeople who passed by stopped in their tracks

The goddess of death was very pleased

But both men had asked Maria to marry them.

How to choose now?

In the midst of this dilemma

The pirates suddenly came and killed her.

And because Xiaohua had the badge from the God of Hell

He drove them away in a few seconds.

He can fight and protect the town from attack.

In desperation, Maria agreed to spend some time together first

But she never said she agreed to get married

So Xiao Ma still had a chance

Early that morning, he secretly asked Maria out

On the wooden bridge with candles

And he leaned against a tree and sang a love song

As the sun rose.

The pony confessed his love to Maria

But just as she said yes

The gods of hell sent a poisonous snake

She never woke up again.

Pony felt guilty that he did not protect his beloved one

But at that moment, the god of hell tricked him

to give up his life to find Maria

So the pony died too

He became a skeleton

Little did he know that because of that bet

This place has been occupied by the God of Hell

And Maria didn't die at all

She just passed out.

But under these circumstances

She had to marry the big hero Xiaohua

At this time to change all this

Xiao Ma could only go to the Forgotten Land

And found the goddess of death

Told her about the cheating of the God of Hell

And with this cunning God of Death also made a bet

If the pony won

He must be resurrected back to earth

And in his confrontation with the giant bull

Although, he was weak.

But, the pony will use his song to make everything better.

After all, the bullfighting family is never afraid

At this time, the pirate leader has killed the town

However, in the course of the confrontation between the two men

The badge was accidentally knocked away

Xiaohua immediately fell to his knees and begged for mercy

Pony came back to life

The town's dead ancestors came to their aid

The end is of course a happy ending

The villain was finally defeated

This article was published by the #author at #Time on the #website name, if in doubt, please contact us.
本文链接：https://www.toomic.com/movie/413.html