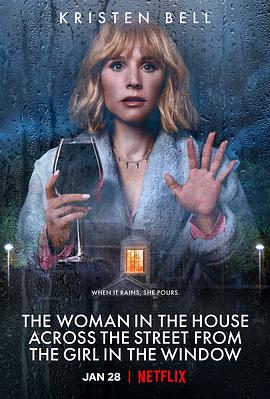 This woman took out her long-lost clothes

Soon she has a male fan

She is about to have a drink happily

Suddenly she saw her more beautiful neighbor across the street

Covering her neck and bleeding profusely

Red wine spilled on the floor.

She was witnessing a murder.

The woman rushed to call the police

But because she was too excited

She couldn't even say the door number clearly

We can't wait any longer!

She screamed and rushed into the pouring rain

Before she could take two steps

And collapsed in the middle of the road

It turns out that her name is Jin.

was an abnormal human being

As a result, Jin suffers from a rare form of rain phobia

He helped her into the room

Afterwards, in order to repay Keung

She came to visit again

She was as close as a family

But then she fell

Jin thought Keung must have fallen in love with her

But the next day she almost died at the door

Keung not only had a girlfriend

And a flight attendant named Lisa

She has a good face and a good body.

The one who was killed just now

The weird thing is

When she woke up, the police arrived at the scene

She was warned about the old alcoholic

Lisa was not in trouble

She reported a false alarm

Kim didn't believe she could have been mistaken

But Keung said Lisa flew to the West Coast yesterday

She was texting in the morning

She must be delusional because of her alcoholism

Not willing to give up, Kim

She broke the street light on purpose.

She got rid of the maintenance man

Then forcibly opened the back door of Keung's house

This is a felony in the United States

But Kim has gone crazy

She was on the floor looking for blood.

The floor was clean and spotless

But the earrings left behind the curtains

It was clearly Liza's.

Just then Keung came back

Jin decided to go to the beach for a break

Forget about all this crap

But the poster at the airport clearly said

Lisa's airline had never flown to the West Coast.

On the contrary, children don't lie.

Last night, her father and Lisa had a very violent fight

When she searched for Keung's name

Sister Jin was creeped out

At that time, the police named her as the prime suspect.

She went to the police station to report the case.

But with just an earring

The police wouldn't arrest just anyone

A few sentences and then sent Jin away

But at that moment, someone wrote on the glass of her car

If you don't let go

You will be next

Such blatant threats indicate a problem

Sister Jin should wash the car

Who is the real culprit

Here is an early reveal

Lisa is not a flight attendant

She is a repeat offender of beauty fraud

The first two were very lucky

The first one was his wife

Because of the education of his daughter Rolling Sister

After an argument between them

Keung pushed her into a pond

Watching the woman float up

Because there is no evidence

The police classified it as an accident

The second is a female teacher of the volume sister

Scared the female teacher wanted to call the police

Keung can only hit hard again

Because the angle spoon drill

The third is Lisa, a flight attendant

She was having sex in social media

When Django found out about the scandal

Was stabbed through the neck

But this time there was an eyewitness

It was Kim, who lives across the street.

Unfortunately, after the death of her daughter

She had been drinking and taking drugs for years

She would often talk to the air

She always thought there were monsters living in the attic

They were all images that Jin had imagined

Of course, the police would not accept them.

When she was determined to investigate on her own

A man rushed out

And forced her to tell him where Lisa was

It turns out that Lisa is just a bartender

And the man was a paid dancer

His name is Tie Zhu

The two wanted to get rich overnight

So they formed a fraudulent CP

Lisa is responsible for catching the old snakeskin rich man

After the rich man transferred the medical expenses

Lisa will change her temperament

Looking for opportunities to fight and break up

A few months ago

Lisa saw in the obituary that Keung had lost his wife

She immediately set up a new trap

She followed Keung to the parking lot

Pretending not to know how to do maintenance

To get Django's help.

Then she deliberately talked about her husband's death

More is to arouse the empathy of Keung

Keung was driving a BMW X6

It costs over a million dollars in China

But the day before yesterday, Lisa disappeared.

So Tiezhu suspected that Lisa wanted to get rid of him

She deliberately made it look like she was dead.

To play the evasion

Then the alarm is obviously the complicity of Sister Jin

After some intense explanation

The misunderstanding between Tiezhu and Jin was resolved

Even woke up the next day

Tiezhu even made breakfast with his own hands

But before the meal reached his mouth

The police knocked on his door

The reason was simple: Lisa's body had been found.

The culprit was caught.

Now we can finally start a new life, right?

That night, the police made a second score.

Tie Zhu was declared to have a perfect alibi

The painting in the attic was one of the evidence

Brother Keung is handsome and rich

Sister Roll is cute and understanding

These are the things that Jin lost and wanted to have

The key is the murder weapon found

It is the palette knife in the painting

The comparison shows that

Only Kim's fingerprints are on it.

The key is that Jin was addicted to alcohol.

After being interrogated by the police.

Do not be fooled by the director

Often the most inconspicuous small role

is the real hidden boss...

Kim had a dream about killing someone.

She was bailed out by her best friend and returned home.

She received a death threat from Keung

If you come near me and my daughter again

I will not let you go

At night she heard strange noises in the attic again

She went to check it out with trepidation

And she was drenched in blood.

At that moment she panicked.

Did she really do Lisa, the neighbor?

She was hiding in the attic.

But because of her alcohol and drug addiction.

She forgot all about it.

Left alone, Kim had no choice but to call her ex-husband

She had to call her ex-husband, who was an FBI agent.

Her ex-husband comforted her

But he still loves her

He believed that she was never a murderer.

With the encouragement of love

Then she discovered something that made her head explode.

The maintenance worker she hired, Biaozi

He sleeps here all year round.

The strange noises she often heard

The reason was found

While she was talking, Jin glanced out the window.

At that moment, Biaozi was carrying a hammer

He was walking across the street towards Qiang's house

It all makes sense

Biaozi has a crush on Sister Jin

And Lisa had a bad word for her

And Jin was in love with Keung.

Biaozi must have seen her as his rival...

She couldn't think about it anymore, so she ran out the door.

Gritting her teeth, she overcame her phobia of rain

She climbed across the street.

But when she entered the house, she was dumbfounded.

Biaozi was lying in a pool of blood.

He hadn't come to kill anyone.

He had come to deliver a letter.

And Keung was limp on the couch.

Obviously he had been attacked...

How old are you?

Reimi sneered and told the truth

Back then, her mother didn't inform her that she was pregnant with her second child.

So she was the one who did the trick at the pond.

The female teacher was too annoying.

She simply pushed her way off the lighthouse.

This fraudulent woman won't give her any candy.

She was so tired of living

Hearing this, Sister Kim was shocked

I was even more shocked jaw

The screenwriter is also too good at making up

The next paragraph of the girl's fight with Sister Jin

We can just skip it

After the end of the battle

Although Sister Jin was seriously injured

At least cleared the charge

and her ex-husband's brother to form a family again

And a year later, she was blessed with a son

At that moment, there was a noble woman in the next seat

Then she fell into a deep sleep with alcohol.

Unexpectedly, she woke up with urine

Jin went to the bathroom

When the door opened

The noblewoman was cold

But they opened the door again

There was nothing inside

Even the flight attendant said

There was no one next to her

Is it a hallucination again?

Kim found something under the seat.

Her next round of deduction show is about to start again

A combination of dark humor

suspenseful and thrilling, and all kinds of unexpected reversals

This article was published by the #author at #Time on the #website name, if in doubt, please contact us.
本文链接：https://www.toomic.com/movie/434.html