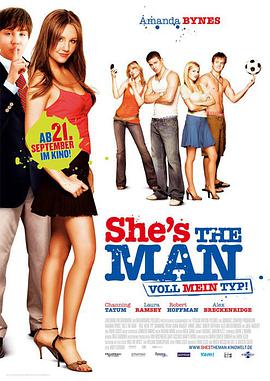 Can you recognize it?

Putting on a wig

Disguised as a boy

Fooled everyone at school

Even joined the school soccer team

Spent her days hanging out with a bunch of boys

And she wasn't even recognized.

Look how she did it

A set of wigs.

A pair of fake sideburns.

A pair of fake eyebrows

And then a wrap to tighten the curves

Imitate the words and actions of a man

In a few easy steps.

Now no one will recognize her as a girl.

As to why she dressed as a boy

Just to prove one thing

Who says women are inferior to men?

The reason was simple

Girls are not as good as boys at soccer

She was not convinced

But she was ridiculed by the coach and the boys

The next game is against her brother's school

It just so happens that she and her brother look alike

So she had a plan

Pretending to be her brother

She takes his place in school

Beat those men who despise her

So she did it.

She found a stylist friend

And with a little dressing up

And she was able to hide from everyone

It's not hard to dress up as a man

The hard part is not to be recognized

She had to be careful not to be discovered

There are two people who are potential threats to her

One is her roommate

The other is the principal

The first time she met the principal

Her wrap was caught in the locker

The first time she met the principal, her wrap got caught in the locker and was nearly discovered by him

The second time her wig was discovered

The principal pointed out seriously

It was male pattern baldness

He taught her the experience of hair growth with great care

Compared to this naive principal

The biggest threat to her is her roommate Duke

He's not just any roommate.

He was the captain of the school's soccer team.

Living in the same room

She has to be on guard all the time

She also had trouble making the varsity soccer team

She tried her best to perform

But the coach still put her in the back-up team

There was a training session

She took a heavy kick

Others looked painful for her

She then remembered that she was a boy

All kinds of behavior

Duke and the others saw her as a bad guy

She rushed to her friends for help

And so the show began

In front of Duke and the others

The sexy girl hugged her

She was ruthlessly chased away

Duke and the others were a bit confused

The woman must be blind

But the next second

Another beautiful woman threw her arms around her

And she swats her ass away.

Duke and the others couldn't believe what they were seeing.

Until the third woman appeared.

Duke and the others were so excited that they decided

She was the legendary lover.

Now she was the idol of the whole school.

I've never seen such an exotic charity event before.

For a fee, you could kiss the girl who was participating in the charity.

There was a long line of men.

The little fat guy in the back couldn't wait any longer.

The girl he was kissing

The girl he kissed was his roommate, Vivian, whom he considered his brother.

Vivian was forced by her mother to participate in this event

Duke also came with them ah

For this reason, Vivian was very painstaking

And then she had to become a man

To deal with Duke and the others

Vivian was constantly running around

Changing back and forth

One minute she's a boy

And then she'd be a girl.

The little girl who witnessed this all fell apart

But Vivian because of that kiss

To Duke some heart

She deliberately set up a conversation

Asked Duke kissed his sister how it feels

Duke's face was red and his mouth was nervous

It was obviously the first time

Vivian found herself in love with this innocent boy

But Duke already had his own heart

He was in love with the school girl

He even asked Vivian to help him chase the school girl

In exchange, he started teaching Vivian how to play soccer.

Vivian's soccer skills were getting better and better

And the stern coach saw it.

The coach promoted Vivian from a substitute to a starter

She even took the opportunity to molest him

Vivian held back the sorrow in her heart

This day the school girl is not normal

She took the initiative to date Duke

He couldn't even stand up

She was jealous and approached the school girl

She persuaded her not to go out with Duke.

The school girl was overjoyed

But Vivian, who was dressed as a man

The reason why she went out with Duke

To add fuel to the fire

The school girl invited Vivian to join her at night

But at the end of the night, Vivian didn't come

One look at Duke felt disgusted

The school girl continued to show affection and stimulate Vivian

Vivian was pissed off.

The school girl mistakenly thought that her plan had succeeded

She immediately decided to take the initiative

She went up and gave her a kiss

The school girl opened up her heart

She confessed her love to Vivian

But she didn't know

This person is not Xiao Wei at all

But it was Vivian's real brother

This scene was all seen by Duke

Duke mistakenly thought that Vivian had fallen in love with him

Without giving Vivian a chance to explain

Then he angrily kicked Vivian out of the dormitory

He treated Vivian as a brother

Vivian had long thought of him as her lover

This was the biggest college soccer game in the district, Yunchang.

Not long after the game

The principal led his men into the green field

The principal received the news from somewhere

In front of everyone

He pointed out that my brother was a woman

Everyone was baffled at once

He insisted he was a man

But the principal didn't believe him

Brother had to prove his innocence

Now the principal was embarrassed

With people left the scene in a hurry

All by the hiding Xiaowei saw

Before the game, she went to the locker room

She found that her team uniform was missing

Only now did she realize that her brother was back.

He was confused and took her place on the court

But he was not good at the game at all

He was being abused on the court.

Vivian could hardly stand it anymore.

Vivian pulled her brother to the side

She had to play no matter what

She wanted to fight in front of everyone

To beat those people who looked down on her

To prove that women can play soccer well.

In the second half, Vivian returned to the pitch with a new identity.

On the green field, Vivian was full of energy.

She was more aggressive than the men.

But Duke was still angry.

She just wouldn't pass the ball to her.

She tried to explain to Duke.

Duke didn't listen to her.

And got into a fight with the goalkeeper

This led to a melee between the two teams

In the end, it was the hot-tempered coach

In order to solve the misunderstanding

Hui confessed his love to Duke

Duke was even unable to accept a man's confession

Xiao Hui now knew that what she was saying was useless

She tore off the fake sideburns

Took off her fake eyebrows and wig

She took back her daughter's body

Even so, Duke did not believe her.

Vivian had to prove her innocence.

Now everyone was convinced

The morale of the staff was at its peak

Vivian played more and more bravely on the green field

At the last moment, Vivian dribbled the ball continuously

But he was kicked down in the opponent's box

The referee immediately took out a red card

Look at that arrogant goalkeeper

The ridicule of the past is still in her ears

But now she has no fear

A shot in the air

The goalkeeper fought hard to save the ball

She stands up in the air with great energy

The ball is in!

The goalkeeper who couldn't accept it

He ran out of the green field crying and screaming

Who says women are inferior to men?

Vivian proved everything with her actions

She has also gained love

She's already got what she's been fighting for all her life

In the future on the green field

There will be a pair of soccer players

No one should be underestimated

Eventually you will realize your value

Get everything you want

This article was published by the #author at #Time on the #website name, if in doubt, please contact us.
本文链接：https://www.toomic.com/movie/450.html