The Japanese animated film "Lupin III vs Detective Conan Theatrical Version", released in 2013, directed by Kazu Kameaki and written by Kazuhiko Kato and Tsukasa Aoyama, the film tells the story of a crime alert letter delivered to the police in the dark and windy night. The sender of the letter is the legendary thief Lupin III, who claims that he is about to steal the cherry sapphire, a secret dream treasure kept in a bank in Mika-cho. The letter aroused great concern among the police, and Detective Koichi Chikata, a special search officer for Lupin III from Interpol, met with Inspector Megure of the Japanese Police Department, and both sides joined forces to prepare for this legendary thief. After a fierce competition, Lupin III, a magnificent thief, finally took the cherry sapphire into his pocket. He takes the secret treasure to an empty pier and calls a mysterious man who calls himself Allan Smith, and beside Allan the figure of Peaks Fuyuko stands leisurely. At the same time, the Italian idol singer who enjoys great popularity in Japan, Emilion Validi, accompanied by his manager Claudia Belch, went to Japan to hold a large concert. The young detective group's friends are obsessed with the idol, while Conan is suspicious of another character, that is, Emrion's bodyguard - Lupin III's partner Jigen Daisuke! It turns out that Emrion had previously received a threatening letter, the other party threatened to harm Emrion's life if the concert was not suspended. After that, Mouri Kogoro and Ran followed Emrion and watched out for any suspicious people around. On the other hand, the trio of teenage detectives, Ai Ashigara and Dr. Agasa together to track down Lupin III, but the three children accidentally met Lupin's best friend Goemon Ishikawa. On the day of the concert, 50,000 people gather at the Toto Stadium. Conan and Ai Ashigara sneak in and look for the suspect of the cherry sapphire deal. And Lupin, the police are also with their own purposes secretly launched operations. At one time, the detective, the thief, the police and the mysterious organization led by Allan are engaged in a fierce struggle in the noisy and noisy sports stadium. With the deafening sound of music and cheers, a horrible conspiracy begins to emerge. What is the real purpose of Lupin? And will Conan and the others be able to stop the terrible plan? 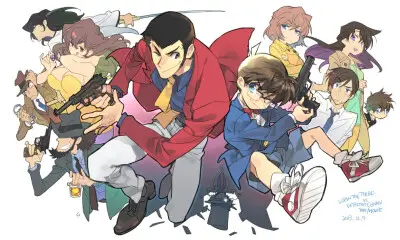 A theatrical sequel to the TV anime special co-produced by Japanese TV anime "Lupin the Third" and Yomiuri TV anime "Detective Conan" has united the two Japanese national cartoons for the first time, leading to an unprecedented event in the world of comics and movies! Not only did the two television companies make huge commercial profits, but they also fully satisfied the classic duel that fans had been waiting for, creating a perfect fusion of two classic manga amidst a great deal of cheering! Of course, since it is the theatrical version of the film "Detective Conan", the film starring the Conan-based film plot, with the consistent humor of the "Lupin III" comic book style, so that should be slightly serious Conan film a change in the atmosphere of the past, easy and lively fun and humor on the big screen, become the most distinctive and popular Conan movie sequel after the "Baker Street Undead"! The movie continues the plot of the TV version of "Detective Conan vs Lupin the Third" and brings the story back to Japan, thus continuing the interesting story of Conan vs Lupin the Third! The movie perfectly restored the classic role of Lupin III, but also let the genius of this both righteous and wicked robbers encountered the smartest elementary school students in history Edogawa Conan, although they have seen each other's power, but the difficult situation always makes the pair of happy couple tightly entwined together, but compared to Conan's single force and also by a bunch of dragging the situation, Lupin III's team can be described as Quite luxurious and powerful, but fortunately all the problems are not difficult to defeat our smartest little detective, no matter what time he was able to turn the danger into a bargain, and always think of ways to start the chase of Lupin III again! The movie takes a new angle to interpret the content of the movie, combining the high intelligence deception and detective story together to enrich the whole plot! The film is no longer simply to show how to find the truth of the case mileage, more or show a serious and heartwarming theme of love and loyalty! The movie is sometimes tense and exciting, sometimes funny and humorous, sometimes serious and serious, sometimes touching and warm, using different cinematic techniques to show the charm of the movie, but always the main line of the movie tightly grasp in a loose and tight control of the plot. The director has a good grasp of the performance of the main characters in the two comics, so that the main characters in each comic can fully show their own characteristics, which not only allows the characters in the two comics to fully integrate together, but also makes the whole story in the process of advancing more expressive and fit! The most admirable thing about the director is that he allows the audience to fully satisfy their love and admiration for the two main characters of the comic, so that these two popular comic characters unite to fully drive the emotions of the different camps of fans, the fusion of the two comics does not favor one over the other, but fully mobilizes the characteristics of each character so that the movie shows an evenly matched momentum! The movie also understands the fate of the 1 + 1 > 2 effect, creating a movie fan effect and sensational effect can definitely make every anime lover can not stop having the desire to watch! The movie changed the decadence of the past theatrical version of the plot pieced together to brush up the sense of existence, did not fall into the plot without content of the film blind spot, rediscovered the theatrical version of the film creation concept, no longer simply to come out, thus weakening the time and patience of the plot polishing! For the domestic audience, "Detective Conan" can be a household name, the world's smartest schoolboy's love has never waned, whether it is anime or film, it seems that as long as he does not end we have the courage to keep going! As for the other anime work associated with this movie, "Lupin the Third", although most of us have not been exposed to it, but I believe that after watching this movie will also slowly like this character, because this guy is really too cute! For the recent years of the theatrical version of Conan movie, it seems that the whole are straying from the core of the film detective nature, story structure are lackluster no highlights, and can even be said to be more mediocre more general works! But this work is a change in style, in a more relaxed and more funny way to wake up the film's vitality, so this film can be called the most funny and most relaxed Conan theatrical film ever, but also after the "Baker Street Undead" the best-looking film, he not only strengthened the structure of the entire plot and fun, but also greatly enhance the movie's spectacle and entertainment, becoming a commercial The most prominent and distinctive film model of a masterpiece, worthy of our feelings for it!
LupinIIIMiriConanAllanSapphireDetective CorpsSecret TreasureCherryJapan Police Agency

This article was published by the #author at #Time on the #website name, if in doubt, please contact us.
本文链接：https://www.toomic.com/movie/453.html

下一篇
Lupin the Third real version of the commentary text before the release of the name, please lightly hack my country