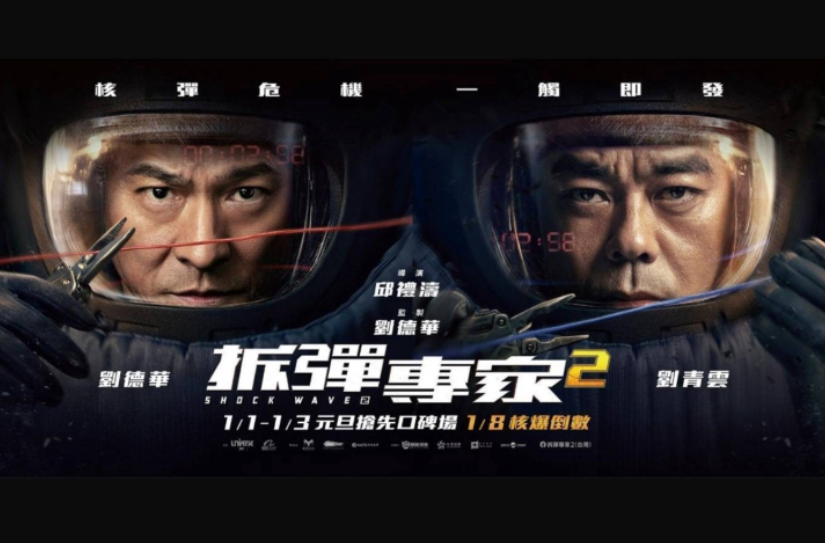 In fact, this movie is really about

No matter how strong you are, the best fate

If you want to rebel against the system

Then your life will only become a tragedy

The protagonist of the story is Pan Chengfeng, played by Andy Lau

Pan Chengfeng has a good partner

He is also a bomb disposal expert

Pan also has a girlfriend

It can be said that in the system, Pan Chengfeng

His career and relationship are both very smooth

When he was on a mission

Pan Chengfeng met with an accident

He had his left leg blown off

After his leg was broken, Pan was not defeated.

He kept exercising his body

Because he thought, although his leg was broken

But as long as he wore a prosthetic leg

He could still continue to do bomb disposal work

He even said 'he can still be as good as before

Pan Chengfeng had completed all the physical tests required by the police force.

However, the top brass of the police force told him

We can't let a handicapped person

to do bomb disposal.

You've given a lot to the police force.

You can go back to your civilian job for the rest of your life.

He had worked a thousand times harder

Just to continue to go to the front line

To work for the police force.

But he didn't expect

The leader's attitude was so cold

Whether you are capable or not

As long as the top thinks you can't, you can't

From this moment on

First, he was at the commendation meeting

With the form of banners

In front of the media

He denounced the ruthless police force for "abandoning him after use"

It was a complete break with the police force.

After that, he joined a terrorist organization.

It's the Resurrection Society.

It's a typical anarchist terrorist organization.

The boss wants to carry out terrorist attacks.

To destroy the current system.

So as to establish a new order.

In the Reanimation Society

He became a bomb expert.

They have caused many bombings.

And caused many casualties to innocent citizens

While on a terrorist mission.

Pan Chengfeng met with another accident

This time his brain was damaged by the explosion

He lost his memory.

The police thought he was the suspect in the bombing

And Pan Chengfeng does not remember what he has done

In order to find out who he really was

Then he got three stories about himself from three people

The first one was his former partner, Dong Zhuowen

How the two of them died together

After he got his leg blown off

And how he broke up with the police force

The second one is his former girlfriend, Pang Ling

The police didn't break up with him

Instead, they sent him to work undercover for the Resurrection Society

The Society was planning a bigger terrorist attack.

He needs to help the police force to eliminate the FSA.

The third one is the boss of the Society.

He told Pan how he had lost faith in the system.

So he joined the Resurgence.

He wanted to fight against the system together.

Soon after, Pan found out that

Pang Ling was lying to him, he was not an undercover agent at all

Before he lost his memory

Before he broke his leg, he was an elite police officer.

He was an elite police officer... who maintained public order and saved the people.

And after his leg was broken.

He was a terrorist

He was a terrorist, killing innocent people.

That is to say, one is the light side

One is the dark side

At this time, Pan Chengfeng

At this time, Pan Chengfeng has to face a choice of two.

Should he return to his bright side?

To stop the terrorist attack of the Resurgence Society

Or should he continue to be his darker self

To fight the system to the end

In the final moment of need

He chose to set off the bomb himself

To die with the terrorists.

He sacrifices his life to protect Hong Kong.

It seems that "The Hurt Locker 2" is a story of heroism.

But in fact, Poon's life is a tragedy.

The source of this tragedy is the rebellion against the system.

Imagine if, after breaking his leg, Pan Chengfeng

He was appointed to a civilian position by the organization.

He would not only receive preferential treatment from the system

At least he would have been well fed and clothed

He would also become a hero in the eyes of the media and the public.

may even be the best moment in his life

Enough to light up the rest of his life

In reality, if Pan Chengfeng's situation comes up

The movie gives us another hypothesis

Pan Chengfeng does not agree with the system's arrangement

The way he chose at the beginning

Very positive energy, is to do everything possible

To make his body up to the standard

Then he continues to work as a bomb disposal expert

When he completed this almost impossible task

He was rejected on the basis of his disability.

were like mountains standing in front of Pan Chengfeng

A deterrent for people

What Dong Zhuowen said to him was very accurate

Not because of your efforts, Pan Chengfeng

It will not change because of my pleading

In other words, in front of the system

We are just a tool.

You deserve to be honored for your efforts.

We can give you recognition.

Power to change the body

But if you want to change the system by yourself

Sorry, it's not possible.

Pan Chengfeng thinks there's nothing wrong with his own ideas.

It's the system that's wrong.

It's the world that's sick.

So he went to the extreme.

He became a terrorist to fight against the system.

From the moment he joined the Society of the Resurrection and killed the first person.

He had no way out.

He chose self-sacrifice in the end.

There are two reasons.

On the one hand, it was the goodness of his heart

This goodness made him take the path of a police officer

On the other hand, he wanted to atone for his dark side

Even if he survives

Even if he survives, he will spend the rest of his life in prison.

He will face the accusations of outsiders, but he will be able to die and be done with it.

To put it bluntly

"The Hurt Locker 2" is not a heroic story at all.

It's just a tool in the system.

Because of dissatisfaction with the job transfer

He takes the extreme way to rebel against the system

The tragic story of the ultimate destruction of himself

This article was published by the #author at #Time on the #website name, if in doubt, please contact us.
本文链接：https://www.toomic.com/movie/488.html