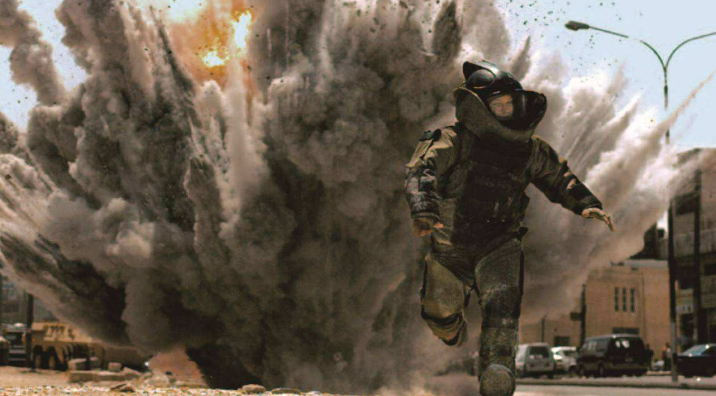 How dangerous is the profession of bomb disposal experts?

Even wearing 40 kg of explosive suits

can only weaken the shock wave of the explosion

There is a saying that

"Blast suits are not used to save lives."

but to preserve the S

The 155mm grenade in front of you.

It's powerful enough to blow up a whole street

The bomb disposal expert is wearing a blast suit.

And carefully placed the detonator

Then evacuate to a safe area

Detonation is carried out.

A man had pulled out a cell phone.

Most likely the device to detonate the bomb

The bomb disposal experts saw the speed scattered away

But they were still a step too late.

It happens all the time on the battlefield.

There wasn't much time for mourning.

Soon the army sent in

His name was Hawkeye.

He had successfully defused 873 bombs.

That means he's been on the doorstep of a ghost.

Hawkeye never needed a robot to find his way.

He walks with ease.

He seems to have a certain hunger for bombs.

Contrary to the previous expert's

He seemed to have a certain thirst for bombs, contrary to the cautious style of his predecessor.

His first task upon arrival on the battlefield

was to defuse a bomb that was in the earth.

He pulled away the debris from the ground

To reveal a sizeable bomb

After fixing the wires

Pulled out the detonator to detonate the bomb

Then cut the two yellow and green wires

The surrounding soldiers all relaxed their vigilance

Hawkeye found a fuse in the stone

He searched along the fuse

Surprisingly, there were still a bunch of bombs buried around.

Hawkeye stood in the middle of a circle of bombs

But he didn't panic at all

Lie down on the ground

One by one, he cut the wires connecting the detonators

All the bombs were successfully defused

Although the mission was completed

The whole process of uncooperative way of doing things

If this continues, it is easy

Let the whole team suffer with

But the bold and courageous Hawkeye

simply do not take it seriously

He smoked his own cigarette in the car

There was a new situation in the city

Walked towards the scene

And then picked up the fire extinguisher

Quickly put out the fire

And when he hit the trunk of the car

Looking at the piles of bombs in front of him

The first thing he did

The first thing he did was to take off his blast suit.

What are you doing?

The weight of those bombs.

Enough to send us all to heaven.

Hawkeye put on his headphones.

Look for the detonation system in the car.

Nothing in the back seat.

Nothing in the driver's seat either.

It was hard to pull out the wire under the locker.

But it was a fake

The crowd of onlookers was growing.

Falcon had a bad feeling

But Hawkeye was impatient to hear

It is appropriate to throw away the headset

Hawkeye hurriedly put the headphones on

Let Hawkeye hurry up and put the headset on 3 to

And this is how Hawkeye responded to him

Finally Hawkeye in the steering wheel under the

Hawkeye returned to the car

This habit is somewhat familiar

Bomb disposal seems to be a good thing for him

Every time he smokes a cigarette afterwards

Falcon was really angry this time

These two people have completely bonded

But his cynical attitude

For Falcon is the real time bomb

This day, the detonation team is detonating in the desert

Just about to detonate the second one

But Hawkeye stopped him.

He said he had lost his gloves near the bomb.

Then he had to drive to the detonation site.

Clutching the detonator in his hand

I thought I'd just blow this kid up.

After all, the accidental bombing of this kind of thing

in the battlefield also often happen

but in the end

he still did not go down

The bomb squad was attacked.

But the enemy was too fast.

Far beyond the range of rifle

The enemy had a sniper.

They're aiming and shooting.

The falcon doesn't say a word.

I'm not going to say anything.

And Hawkeye, naturally, was his spotter.

The two were working well together.

In a short time.

The two of them worked well together.

But in case there was an ambush.

Falcon always looked at the scope

They didn't dare to let up a bit.

The desert heat was killing them.

They ran out of water and had only one packet of juice left.

Put a straw in the juice.

handed it to Falcon's mouth

The barrier between them

Before life and death together was broken

In this moment they

To infiltrate an unoccupied building.

Take the bombs left behind by the militants

On the table, there was a

They were going to take part of the bomb

And then detonate the rest of the explosives

And the boy who had been fitted with the bomb

Naturally, he was going to be blown up along with him

Hawkeye, who was always calm

But suddenly broke down

Because he knew this man on the table

It was the boy who sold him pirated discs before

Sometimes he would play soccer with him

He continued to plant the bomb.

But he found he still couldn't do it

Finally he decided to take the risk

To remove the bomb from the boy's body

and take him away.

The mission was finally accomplished

But just as Hawkeye was telling his comrades to retreat

Watching his comrades being blown up alive

All the GIs were in shock

As a bomb disposal expert

He had successfully defused 873 bombs.

He was always calm, rational and cynical.

He was on the verge of collapse.

Back at the camp.

Hawkeye hid in the shower alone

Washing the blood off his body.

Hawkeye's tour of duty will soon be over

Before he leaves the battlefield

But something else happened outside

An Iraqi man in a suit.

Iraqi man in a suit standing in the street.

With bombs strapped to his body.

He says he's being persecuted.

He has four children at home.

He doesn't want to die.

He asks the soldiers to remove the bombs from his body.

Hawkeye puts on his blast suit and goes over there.

But Falcon thinks it's a trap.

As soon as he gets close.

The bomb will explode.

The bomb will explode.

But Hawkeye still insisted on going.

He walks up to the man.

Then squatted down the body

Ready to defuse the bomb

It's a time bomb.

It's chained to the man's body.

Hawkeye gets the wire cutters.

Start cutting the steel bar on the lock.

But this lock is too difficult to cut

With 30 seconds left on the clock

He just got the first piece of the lock open.

No, there was no time.

Hawkeye starts apologizing to the man.

The man was blown to pieces.

A wave of air with debris and shrapnel sweeps around.

But it is easy to see from the eyes

He never got rid of the battlefield

Family life is dull and boring

Eventually he found that he could not adapt to this life

He still liked to disarm bombs

So he told his wife

There's been another bombing in Iraq.

A lot of kids are dying because of it.

There is a need for a bomb disposal expert

Then Hawkeye said goodbye to his wife

Embarked on the journey of bomb disposal

There are no winners on the battlefield.

The damage is often mutual

Many people may not understand

After suffering from war, Hawkeye

Why do you want to go back to the battlefield?

The reason may not only be

The alienation of war on people

So that they can not return to modern civilization

He can even make soldiers

Into the obsession with war

As the opening line of the film says

The urgency of war can be addictive

This article was published by the #author at #Time on the #website name, if in doubt, please contact us.
本文链接：https://www.toomic.com/movie/490.html