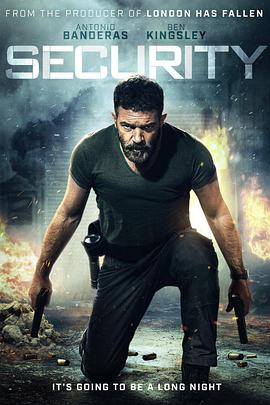 The thugs grabbed the little girl and tried to kill her.

Just then, an eight-foot-tall man

The mugger is shocked by the other man's aura.

Daring not to make a rash move

The little girl understood the idea of taking out the electric baton directly hit the mugger.

At the extremely critical moment

The man raised his pistol and fired a shot at the other side's head.

No one thought there would be such a hero.

His name is Anton lives apart from his wife and daughter

Life in both places is relatively depressed

Don't see him having a hard time now.

In fact, he has another identity.

Anton has achieved great success in the battlefield.

As a result, he also suffers from war syndrome.

So much so that he still can't find a job a year after retirement.

And to take care of his wife and daughter.

Anton had to find someone to beg hard.

Finally found a job as a mall security guard.

The scene shifts to an FBI escort truck speeding down the highway.

This car is carrying an important witness.

Unexpectedly, a group of tough bandits suddenly rushed out halfway.

Firing at the convoy.

Look at the weaponry of the other side. Not the usual thieves.

It only took two minutes.

FBI agents were wiped out.

Only one girl took advantage of the chaos to escape

Meanwhile Anton, on his first day of work

reported to the mall on time

Security chief Vance brings him to meet his new colleagues.

They are Mason, a stock speculator who dreams of making a fortune every day.

Ruby, the only female in the security team

After the job was done, the captain took Anton on a tour of the mall

He explained the workflow to him

This kind of patrol work for the former special forces Anton

Anton he walked to the front door of the mall

Suddenly a girl outside the door desperately calling for help

The girl was too scared to enter the door and fainted

Anton rushed to carry her to the security room

While checking her physical condition, he asked his colleagues to call the police.

Strangely enough, the cell phone could not search for any signal

The captain saw the situation and used a landline

I didn't expect to be able to make a call

Their signal source was cut off.

Just then a middle-aged man appeared in the surveillance

He claimed to be the girl's father

The girl ran out because they were fighting

The captain immediately ran to open the door

But he was stopped by the cautious Anton.

Years of combat experience told him

not to trust anyone easily

Anton asked the other girl's identity and characteristics through the door

The man answered the question correctly.

Dongseong even carried the girl out.

Just as the captain was about to open the door

The girl suddenly woke up and screamed loudly

The man was upset and called for one of his men

With a box full of dollars in his hand

They could never earn so much money in their lifetime

The man's request was simple

As long as the girl is given to him, the money is theirs

The deal was a sure thing.

Anton naturally did not believe in the man's bullshit

He warned the captain not to be fooled

As soon as the door opens, everyone will be in trouble

When the man saw this, he changed his mind and made a threat.

The captain, under his bullying

Obviously some can not bear to open the door

Anton realized that the situation was not good

Without saying anything, he knocked him out with a punch

Soft is not possible, then hard

And that little girl is the witness Mira

The reason why they wanted to kill her

He had a lot of evidence of Bald Head's crimes

But all he wanted to do was turn over a new leaf.

That's what got her killed.

But the evidence wasn't lost.

It fell into the hands of Mira.

Once they figured out what happened.

The group decided to unite and help her.

They first hid Mira in a storage room.

Then, under Anton's command, they developed a plan of action.

To make a high voltage door.

Then they carried the sofa upstairs and doused it with gasoline.

Ignited the fire and pushed it through the window

The sofa hit the car of the criminals

The people inside were instantly surrounded by fire

The bald man, who did not care about it, became alert.

He sent his gunmen to shoot wildly inside the mall

And then he had his best men fly over the wall

To sneak in through the upstairs windows

He met the captain at the stairway

After a struggle, the captain was quickly defeated.

Smash the surveillance and tear up the map

After all this, everyone quickly reunited

Waiting for Anton's next instruction

Given the current situation

The signal source is cut off and there's no hope of calling the police.

The other side has many people and weapons.

They will soon be able to enter the mall.

If we want to deal with them, we can't.

The only way out is to divide and conquer

Anton then began to assign areas.

Ruby was in charge of the perfume store.

The captain was in charge of the kitchenware store.

Mason was in charge of the furniture garden store

East Side was stationed closest to the entrance

As soon as he saw the police car patrol

As soon as he saw a police car, he took out his torch and sent out a distress signal.

While the group was making preparations.

Mira came out of the storage room without permission.

She asks Anton to join her in the fight.

Meanwhile, Baldy enters the mall with a group of mercenaries.

Before his tracks are exposed

He told his men to clean up the scene quickly

Then he went to the security room

Connected to the mall's surveillance system

First, he went to Ruby's area.

But she was prepared to use a homemade trap

To distract their attention.

Then she unleashed her bow and arrow and caught them off guard.

But there were so many of them.

Bullets were raining down on them.

Mason, who was the least brave

Using the electric baton in his hand successfully fought back

Then grabbed the other side of the assault rifle

The oncoming assailants were shot into a sieve

Anton sensed a change in Mason's situation and went to check

Sure enough, he saw several thugs stationed in that area

He quickly told Mason to retreat to a safe place

But the flashlight was not working at the right time

Seeing the police car was about to leave

Dongcheng rushed out despite the opposition

But he was still a step too late

Not only did he fail to call the police car

Instead, he was shot in the head by a lurking assailant.

To pacify the people Anton made a crazy decision

He told everyone to go ahead and rendezvous in three minutes

He started a killing spree

Then he took his gun.

With a double shot, the four thugs were instantly boxed in.

After a few moments, more than 10 mercenaries were killed

Anton had just cleared the field.

There is a mercenary hit Ruby

The captain ran away with Ruby in his arms

Finally arrived at the rendezvous point

However, Ruby was badly injured.

In the end, she couldn't escape from death

At this point, everyone was feeling bad.

Mira even hid in the toy room

He knew that the iron door in front of him

is the last hope for everyone

Once it was breached, life and death were unpredictable

Must be prepared for the worst

Baldy's side of the wave of attacks did not succeed

Continue to shout outside the door

Claiming that they will be destroyed this time

Then he instructed his men to start breaking down the door

Just when the crowd was feeling desperate

Everyone instantly came to life

Anton told the captain to stand by the iron gate and try to hold off the mercenaries.

But Anton was wounded and armed.

The police took control of him as soon as he entered

To dispel the police's suspicions

Anton called Mason and asked him to bring Mira here

But by now the mercenaries had broken through the gate.

In order to get through, they had to break through their encirclement.

The captain saw the situation and disregarded his own safety

The captain saw that he had no regard for his own safety.

Successfully covered Mason and Mira out

But he himself was hit by the other side and fell to the ground.

On the other hand, Anton noticed that the police officers in front of him looked panicked.

They had tattoos on their necks.

He quickly used the walkie-talkie to warn Mira

But unfortunately it was too late.

Mason was beaten on the spot into a hornet's nest

Anton saw that he fought back

He was a special forces soldier, and he was so ruthless that he was able to kill him with every move he made.

In a few moments, the fake police were eliminated.

Then he contacted Mila.

He asked her to get the professional walkie-talkie for security.

He found a motorcycle parked in the mall.

He rushed out towards the mall.

He wanted to destroy the fake base station the bandits had set up.

To get the signal back to normal.

This would give Mira a chance.

Using the walkie-talkie to send a distress signal

But on the way, Baldy's right-hand man

He jumped down and pulled Anton off the motorcycle.

The two then engaged in a fierce physical battle

Anton hit him repeatedly to put him on the ground

But he was able to break free

Anton took out his keys and fought back

The tough guy was defeated and fell down with injuries

The signal finally returned to normal with the sound of a blast.

Anton rushed to call Mira to make her move

At that moment the tough guy came after him

Anton didn't panic and took out his old buddy's gun from the car.

One shot to kill the distant shooter

At this time, Baldy was searching for Mira in the mall

On the public channel to send a distress signal

Then she hid again

But the bald man had already found her hiding place

Pulled her out and held her hostage

At that moment, the wounded Anton came in

Bald head saw that he was so resistant to fight

Surprised but also a little afraid

While the bald man was lost in thought

Anton took the opportunity to fire a fatal shot

Send bald head to the west

Anton was also in the battle

From now on, he lives a simple and happy life with his family

Ace of Secrets is a typical action film.

The main line is clear and there is no superfluous plot.

For the acting skills of the hard-boiled professional Anton O

It goes without saying

The fight scenes are bloodcurdling

The fight scenes are bloodthirsty and fierce.

There is no doubt that an actor

This story is about a veteran

then leads all the security guards to fight the criminals.

This conflict in transition

brings a lot of freshness to the whole movie.

While satisfying the audience's surprise

Well, that's it for today's video

This article was published by the #author at #Time on the #website name, if in doubt, please contact us.
本文链接：https://www.toomic.com/movie/64.html