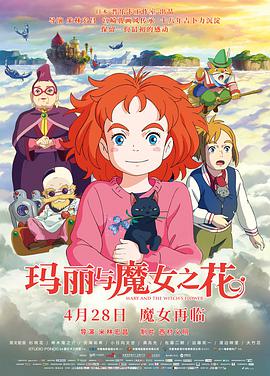 Today is said to be an animated movie "Mary and the Witch's Flower" which was released in 2017.

In a small, peaceful manor, a red-haired girl is cleaning the room.

But after her treatment, the room becomes more chaotic.

What can not do, eat what is not left, this is the true picture of Mary.

Both appearance and ability.

But she is very optimistic and defiant.

She still hopes that one day she can become a great person.

Sitting alone in the wilderness and feeling sad, Mary suddenly sees a black cat and a gray cat.

Seemingly guided, Mary followed the two cats into the forest and

She saw a strange flower with a blue glow.

Fascinated by the appearance of the flower, Mary plucked the whole plant and brought it home.

She took the flower to a learned old grandfather for advice.

She learned that this flower is the legendary "night flight", and is the favorite of the magicians.

It is also the favorite item of the magicians.

And the two cats she saw during the day

It seems that the two cats she saw during the day are the two pets of the family of the boy Peter, whom she hates very much, Tiff and Kiefer.

Mary took the flowers home and put them in a jar on the windowsill, ready for bed at night.

At that moment, the black cat Tiff, who had appeared during the day, somehow shivered and ran into Mary's room.

It seemed that the cat was very close to her, so Mary left it at home.

But the kitten disappeared the next day.

In the morning, Mary's aunt Charlotte asked her to take the jam to Peter's place.

She gives her a note with Peter's address on it.

Sure enough, as soon as she saw him, she was laughed at again.

Why is a boy this age so annoying?

During the conversation, Mary learns that Peter's two cats, Tiff and Kiefer, have disappeared at the same time.

Mary deduces that the two cats have gone to the forest where they last met.

After a fight with Peter gambled and went into the forest alone.

Although she did not see Kiefer, the black cat Tiff was there.

He was holding a "night flying" flower bone in his mouth.

Led by Tiff, Mary arrives at an old tree.

There was a very old looking broom with unintelligible writing on it.

Tiff threw his head up and the flower bones fell into Mary's hands.

Suddenly, the liquid glowed brightly and

The broom suddenly moved on its own, carrying Mary and Tiff high into the air.

There was no doubt that this was a magical encounter.

When Mary came back to her senses, she

Mary had fallen into a huge castle and met a talking mouse.

The mouse called itself the keeper of the broom, and also called Tiff an enchanter and Mary a newborn.

The mouse took Mary to a magnificent building.

This is Endor University, which has produced a large number of excellent magicians.

She was greeted by the principal.

According to the school's rules, people who break into the school are punished by being turned into strange creatures.

So Mary got permission to enter the school by saying she was a magical girl freshman.

Mary's red hair was the butt of jokes among her friends.

Because few people have hair of such a bright color.

But in the wizarding world, red hair is a very rare hair color for senior magical girls.

The principal's attention was immediately drawn to it.

And it seems that because of the influence of the previous flowers.

Mary suddenly had a very high level of magical ability.

Without knowing any spell at all.

She became the top one among the students by using a lot of advanced magic by mistake.

All the students were envious and the teacher was like "you are the only one in the world".

She was shown around, including the mysterious transformation room.

This allowed Mary to enjoy her leap of faith.

From a marginalized character, suddenly became the center.

Magic was a magical good, thanks to the flower.

Yes, Mary suddenly remembered that she was not an unearthly genius magician.

It was all because of that magical flower that she got all these praises.

Mary saw the photo with the flower and the magic book, and hid the book in her bag.

At the same time, Mary was too embarrassed to receive more praise and told the secret of the flower.

Hearing the flowers, the principal's attitude changed drastically and kept asking Mary what she had hidden behind her back.

In desperation, Mary handed over the note with Peter's address written on it earlier.

With a smile of unknown meaning, the principal let Mary go.

However, that very night, a principal's demon sent a message.

Mary, as a trespasser, was not qualified for admission and was in possession of the university's treasure flower.

So the principal kidnapped Peter, and Mary had to return the Witch's Flower in order to do so.

Because of her own recklessness and selfishness, she gave the principal Peter's address.

The headmaster's address was given to him, which brought him this calamity.

Although Mary does not have the power of a magical girl, she must take responsibility for it, and the young girl begins to grow up.

Mary fills her broom with the magic of the Witch's Flower.

And brought the whole flower with her to rescue Peter.

However, the principal and the doctor go back on their word, take the flower and put Mary in the transfiguration room.

The room is full of large and small cages, which hold all kinds of strange creatures.

These are the products of the principal and the doctor's failed research into transformation magic.

Their prototypes are cute little animals, but now they have turned into such ugly appearance.

Among them is Peter's gray cat Kiefer.

Suddenly a teenager in a hood pounces on Mary and mounts her.

It turns out that Mary was taken as the school witch, and the boy is safe Peter.

Mary was overjoyed and immediately used the spell in the magic book to restore the animals to their original form.

And opened the lock of the room to free everyone.

Unfortunately, the principal arrived in time to stop Peter, and Mary had to fly out of the school alone on her broom.

In the air, the broom's magic power is not enough and it lands Mary on a magic island in the sea.

Strangely enough, the island treated Mary as if it knew her, and she entered the middle hut.

It turns out that Charlotte's aunt was also a school witch when she was young.

This cottage is Charlotte's former home.

Because Mary and aunt look very similar, only to be introduced here.

Originally in the school of the witch's flower, it is their own young stolen out brought to the world of people.

It turns out that the principal and the doctor were once good magic tutors.

But after accidentally discovering the Witch's Flower, they became obsessed with researching the highest level of transformation magic.

The only thing that was used was living test materials, including humans.

At that time, a large-scale experiment failed, causing mass casualties in the school.

Charlotte couldn't stand by and watch the principal and the doctor continue to kill people because of the flowers.

It was only in a desperate attempt to steal the flowers.

The school is not able to take the flowers back to the school by mistake.

The principal and the doctor had the idea of studying it again.

Knowing the truth, Mary is determined to make up for her mistake.

With the encouragement of her Uncle Charlotte, she has a reason to save Peter.

With the last of her magic, Mary escapes from the principal's pursuit.

But the broom, which had been fighting together for so long, broke and fell to the ground.

The Witch's Flower and the Grimoire are taken away.

Finally, with the help of the animals Mary had rescued earlier, Mary broke into the magic research room.

The large container in the center of the room is Peter.

He is soon to be used as living material for the final large-scale experiments.

Mary was still not able to make it, and the experiment began.

Using the power of the Witch's Flower, the principal filled the container with a blue liquid that enveloped Peter's body.

But the power of magic was simply uncontrollable, and the rapidly expanding liquid burst the container and

Peter turned into a huge monster.

Seeing that the tragedy of many years ago was about to happen again.

The principal took out her spell book and tried to use the true essence of the spell, "Elimination Magic", to undo all the magic effects.

But she was drained of her magic power by the monster.

The doctor next to her is at his wits' end, but Mary musters up the courage to go and get the last of the magical flowers.

With her magic power, she can use the "remove magic" spell to remove all magic.

But her strength is too small to break the glass.

Just as the monster was approaching Mary, Peter's consciousness awoke as his own body.

He reached out to protect Mary and blocked the monster's action.

The monster must be able to eliminate magic, so Peter must also be able to!

So, Mary turned the book to the page of eliminating magic.

The opposite Peter struggled to put his hand in front of Mary, who grabbed Peter's hand and pressed it on the bright red magic book.

The spell took effect at once, all the magic around disappeared, the monster disappeared, and Peter returned to his original state.

Due to the disappearance of magic, the laboratory was also completely destroyed, the

The principal and the doctor, who had survived death after losing their magic power, probably learned a lesson from this and

The principal and the doctor, who had survived the loss of their magic, had probably learned their lesson and would not try to research such dangerous magic again.

Mary inherited her uncle's virtues and prevented the tragedy of Endor University.

This kind of courage and growth is the real magic of the witch.

The difference is that this time, Mary has a partner, Peter, who fights alongside her.

The flower of friendship and love is brighter and more beautiful than the flower of the witch.

This article was published by the #author at #Time on the #website name, if in doubt, please contact us.
本文链接：https://www.toomic.com/movie/87.html