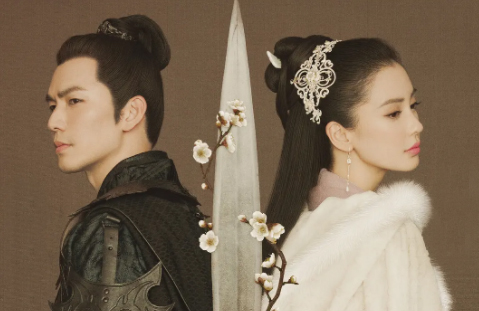 The Central Plains is a battle of heroes

Yan and Jin fought for 100 days without a victory

He Man, the young King of Jing'an of Yan, is ordered to fight in danger

To return peace to the people

He colluded with King Murong Su of Yan, who was afraid of King Jing'an's superiority

Murong Su then ordered the young King of Jing'an, He Man, to lead 8,000 remnants of his army to defend Pusaka City

He Man was waiting for his maid.

He Man was waiting for his daughter Bai Pingting to borrow 100,000 troops from the King of Yan to reinforce him

She can only use her intelligence

To help He Man get through this difficult time

Bai Pingting calculated that a heavy rain would fall at noon

He Man and Bai Pingting made a deal

With Bai Pingting's zither as a signal

To lead Chu Beijie into the river

He Man personally went out to fight Chu Beijie alone

So he fell for Ho Man's plan and fought him alone

While He Man and Chu Beijie were fighting alone

He thought there was a trick

So he shot an arrow at Bai Pingting

A heavy rain fell on time

Bai Pingting immediately sent a signal to He Man

By the time Chu Beijie realized the situation was too late

Chu Mo Ran found that the situation was not right

He immediately rode a fast horse to save Chu Beijie

He went alone to the Yan King's palace, Changzi City

Blaming him for not helping him to eradicate the King's House

In the end, it will only let the King's House gain the hearts of the people and affect Murong Su's throne

to lure He Man into the palace to eliminate him

So he personally welcomed He Man back to the palace

And gave him the black sword.

On the pretext that the Princess was not feeling well

He Man, who was returning to the court to thank him, was taken away in a hurry

After Bai Pingting took away He Man.

Murong Su ordered to charge the King of Jing'an with treason.

The entire King's family was sealed off and no one was left alive.

Only Bai Pingting was left alone

After Bai Pingting took away He Man.

She told He Man about Murong Su's plot.

Then she went with him to the Five Old Peaks

The only way to stop the war between Jin and Yan

He had to help Murong Su.

Help him to eradicate the King of Jing'an Mansion

Let Chu Mo Ran drive the carriage for them

Bai Pingting found that the road was bumpy

Unfortunately, it was too late. The carriage had already entered the forbidden area of the palace.

The leader of the forbidden army accused He Man of trespassing in the palace with weapons.

He was found guilty of conspiring against the king and was to be killed.

He Man repeatedly argued but he didn't listen to him.

She knew it was the King of Yan's conspiracy

In order to repay the King of Jing'an for his kindness

To lure the pursuers for him

After Chu Mo Ran took away He Man

He went to the Five Old Peaks alone

He wanted to ask King Jing'an He Sheng for the life he spared him three years ago.

Chu Beijie blamed He Sheng for not keeping his promise

After he let him go

The people of Jin suffered from the war

So he wanted to finish off He Sheng himself

Chu Beijie let go of everyone except He Sheng

He fought alone with He Sheng

Chu Beijie felt sorry for He Sheng in his old age

He decided to let He Sheng go

But He Sheng chose to commit suicide

After He Man escaped.

He met with the Princess who escaped.

But the Princess had no hope of survival.

She secretly killed herself in the carriage.

He Man had to go to the Five Old Peaks to save He Sheng.

When he arrived at the Five Old Peaks

He only saw Chu Beijie's tomb for He Sheng.

With his hatred for Chu Beijie.

He slashed the tombstone open

To dig out his father's body

When he wanted to take away his parents' bodies.

General Lu Ke came with his men to kill him.

He wanted to ask Lu Ke to spare him from his past relationship.

But Lu Ke didn't care about his friendship.

When he fought with Lu Ke to the death

He told him to escape with him.

That's how he wounded Lu Ke.

He escaped from their pursuit

This article was published by the #author at #Time on the #website name, if in doubt, please contact us.
本文链接：https://www.toomic.com/teleplay/26.html