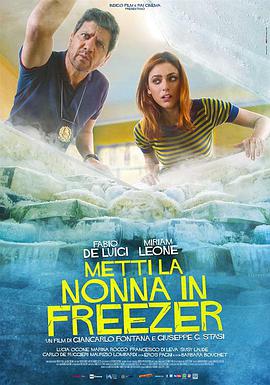 This woman shows us

What is a textbook level of gnawing?

Her grandmother died of illness

Not only does the woman not get buried

Instead, put grandma in the fridge at home.

The woman's name is Anna

Her reason for doing so.

It was actually for the grandmother's pension.

It turns out that Anna runs a heritage restoration company.

Originally took a big order from the Italian government.

But did not get the money.

Anna had no choice but to use the grandmother's pension

To keep the company running.

But now the grandmother has died.

Anna wants to keep getting money

to make such a bad decision.

But Anna still had a conscience.

She thought about waiting for the Italian government to pay.

How much trouble that decision would get her into?

On the other side of town.

A priest is marrying a couple.

is about to marry this 20-year-old.

But when the wedding was in its final stages, the

The priest suddenly lifted his shirt

revealing the police uniform inside

The groom was handcuffed in silver

It turned out that the priest was a tax policeman

His name was Da Guo and he was known as a workaholic.

Even if he worked all year round

So much so that his hair fell out.

His men couldn't take it anymore.

The reason Daikoku worked so frantically

Because of the lack of love nourishment

So they prepared to find him a date

Soon they found the right person

It all started with Anna's side

Anna went to the government office.

hoping to get back the money she was owed by the Italian government.

But the official who received her did not only refuse to pay her.

They even tried to submarine Anna.

Even the armor behind Anna could not stand to see

Inside the armor is a big country

Don't think about it, Miss

So the man in the armor is Daikoku

He was here to collect evidence that the officer had broken the law.

Without saying a word, Daikoku took the officer away.

No, she is still waiting for the official to sign the money

So she rushed after him

During the argument, Da Guo was pushed down the stairs by Anna

Anna was a little worried

Daikoku was injured and hospitalized.

Of course, it's not a big deal.

He almost went to the crematorium.

Daikoku forgave her on the spot

The men saw that Daikoku and Anna were having a good time.

They smelled the sour smell of love in it

They decided to strike while the iron was hot

After Daiguo was discharged from the hospital

They showed him Anna's file

Da Guo was very fascinated by it

He also knew that Anna had a grandmother

He thought that in order to win the girl's heart

He felt that to win the girl's heart, he must first deal with her elders

So Daiguo came to Anna's house

Where is your grandma?

She quickly went to remove her grandmother's memorial

And made a pile of miscellaneous things

on the refrigerator where she hid her grandmother

Daiguo's main purpose was to get together with Anna

Therefore did not find anything unusual

Anna was just about to breathe a sigh of relief

Who knows that when Daiguo was leaving, he said

When he came next time

He wanted to meet Anna's grandma

His intention was to please Anna's elders

But from Anna's point of view

Daiguo was suspicious of her

The eldest sister said that the only way now

Is to thaw the grandmother

And then a big funeral

This should be able to fool Da Guo

The three sisters hurriedly took grandma out of the freezer

Grandma's face was still vivid as ever

If you don't see it

There was no way to detect anything unusual

It turned out that Daiguo had arrived early

In order not to reveal the weaknesses

Anna went to open the door

The two sisters pretended to play cards with the corpse

But she felt that her grandmother was not very talkative

Anna was afraid that Daiguo would find out something

She volunteered to go out shopping with him

The two sisters thought they had gotten away with it

So they put Grandma back in the refrigerator

On the other hand, Anna took Da Guo out for a full day of shopping

When they got home

they found that the power had gone out at home

Anna got a candle

When she turned her head, she found Da Guo rummaging through the refrigerator

Anna rushed over to him

She used the beauty trick to distract Daiguo's attention

At this point, Big Sister suggested

If you make Daikoku hate you

How can I make Daikoku hate you?

Anna will do the opposite

Anna believed it and went on a date with Daikoku the next day.

She thought that this would make Daiguo hate her

But after one night

Daiguo was still devoted to Anna

Anna was worried about this when

Another old man came in.

He insisted on seeing her grandma

When she asked, she found out that

He was Anna's grandmother's licking dog.

I thought Anna's grandfather had died.

He would have a chance to rise to the top

But he hadn't seen his grandmother in the past few days

So he came to ask Anna

Where did she hide her grandma?

Anna wanted to make up for it

But he was determined.

He wanted to see her alive and see her dead

Anna was at her wits' end.

It was her sister's idea again

She asked Anna to pretend to be Grandma.

Anna took on the appearance of grandma

She met with the grandfather

The grandfather was very excited

I didn't expect that after so long

I didn't think she would still look so good

Anna didn't want to get too involved with him

Not only did she refuse his advances

She even kicked him out of the house

But after a while the doorbell rang again

Anna opened the door and saw that it was Da Guo

Because Anna had not yet removed her makeup

So naturally, Da Guo took her for her grandma

Da Guo showed his love for Anna in front of her

I want to hold her for the rest of my life

She secretly took off her makeup and

They officially established a relationship

For the first time, Da Guo, who was always 007, asked for leave from work.

They were finally able to take a break

Finally it was time to talk about marriage

But then Da Guo told Anna a secret

I did a terrible thing to my ex-wife

It turned out that Dagok had been married before

But his ex-wife was sent to jail for tax evasion

Daiguo was sent to jail by his own hands

Is this a marriage or a performance?

Anna, together with her two sisters

Loaded her grandmother's body into the car

They were going to bury it in the wilderness

But on the way there, she met the police for a random check

The leader of the team was Da Guo

But Da Guo is known for his iron face and selflessness

Without saying a word, he opened the car door

Anna thought this was the end, however

The three sisters were completely baffled

Where did Grandma go?

Could she still come back to life?

It turned out that their rear door was not locked tightly

The car was going fast

Grandmother under the effect of inertia

Fell out in her wheelchair

A trip to say go and go

Finally, she stopped in a small forest

She was discovered by her dog licker

Only to find that she was cold

He was so excited that he left with her

On the other hand, Anna panicked when she found her grandmother missing.

She confessed the truth to Da Guo

But Da Guo didn't arrest her

Because he thought that if this kind of

Once word of the incident got out

Then every family will have an old man in their refrigerator

Will you turn a blind eye to it?

We all searched for Grandma.

They finally found her and her licking dog in the woods.

At the end of the story

Anna held a funeral for Grandma.

She could no longer get her pension.

The company has to close down.

It will be up to Da Guo to support the family alone.

His salary is only 1400 in January, and he has to have children later.

Or to dig up the grandmother?

The title of the film is "put grandma in the refrigerator

Very straightforward but for some reason

Always reminds us of a skit by Mr. Benshan

How many steps are there to put the elephant in the refrigerator?

You can put the answer in the comments section

Well, this is all the content of this video

This article was published by the #author at #Time on the #website name, if in doubt, please contact us.
本文链接：https://www.toomic.com/movie/114.html