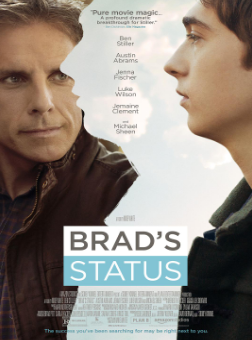 Middle-aged Brad is the one who loves to compare.

Before he goes to bed, he thinks of his promising college friend.

Nick has become a Hollywood director.

Life is rotten and degenerate.

Jason was in the financial industry and he was rich.

Three mansions in your name.

Retire early after getting rich.

Spend your old age on the island.

Fisher works in the White House.

Was on TV every day

Then look at himself.

Runs a non-profit organization with one employee.

Doesn't make a lot of money and has a very mundane life.

The more he feels he has failed in life.

Graduating from high school and applying to college.

He will take a plane to accompany his son to the school interview.

At the airport, Brad wanted to scenery

When the staff said the cost was 1600 at the time.

Yet still tried to give the staff the ticket and bank card.

However, the staff told him that the discounted ticket would not be upgraded.

And you don't have enough money on your card.

Brad's heart that wanted to be scenic was mercilessly shattered

He and his son could only fly in economy class

Jason has his own private jet

He didn't even have to buy a plane ticket

The family was having fun on the plane

Nick had his own plane to transport him

No one will stop him

This world is a battlefield for ordinary people like himself

But for the rich and powerful, it's a playground.

Soon they were off the plane and in the hotel.

He was very proud of himself.

The sight made him compare his children again

The child had become lawless and even started using drugs

This spirit of Q makes Brad feel a lot better.

He finally found happiness in the imaginary comparison

He imagined that his child had been accepted to Harvard University.

How happy he and his wife would be then

He could brag about how great his kids were.

Brad brought his son to Harvard for his interview.

His son came out of the interview office

He was given the news of a sunny day

His son had misremembered the time of the interview

It should have been yesterday.

He complained to his son.

After the scolding, he thought about it and found a solution.

It was to find his old classmate Fisher

Once he always saw Fisher on TV

This makes him very jealous

And it is the kind of jealousy with pain

Brad even approached Fisher to donate to a non-profit organization

Brad felt that Fischer didn't think he was worthy of him.

His self-esteem was shattered.

Now, for the sake of his son.

He had to find a way to contact Fisher.

He asked for Fischer's phone number.

Billy, in addition to giving him his number.

He also bragged about how his bar had doubled in size

And he had two very pretty Hawaiian chicks

On the island with him.

It was a great life.

As if to imply Brad's incompetence

Fischer was still eager to help

Through his connections, he got a Harvard teacher

to give Brad's son another interview.

He began to imagine

Years later, his son would be on the cover of a magazine

I owe my success to you two.

And I bought an island.

The more Brad thought about it, the happier he got.

Knowing that the father and son were here

So they bought a meal

After talking for a while

Brad looked at them

Feeling a touch of sadness

He felt like he should have experienced some good life

Walking on the beach, hugging the right and left

But the difference between fantasy and reality was too great.

Back in reality, he lost sleep again at the hotel

So he went to the bar for a drink.

There he met Mia again.

They talked about their dreams.

Mia's vision is to change the world.

Brad rushed to tell her

And also cited herself as a counter-example

Compared to those students who make a lot of money

Life is a failure

Why should I compare myself to those rich students?

Your life is already very good

Some people can't even afford to eat

People instinctively compare themselves to those they have connections with

They don't care about those who are not.

The next day, Brad and his son were walking down the street.

He thought back to the conversation at the bar last night

He thought Mia was being too idealistic.

Comparison and vanity are the most real aspects of society

One day when Mia is adopted

Would she still be able to hold on to her idealism?

I'm guessing she'll be all about the luxury life.

Once again, Brad accompanied his child to the Harvard interview.

While he was waiting in the lobby.

Jason had a phone call.

In the middle of a conversation.

Jason's three-year-old had a spinal condition.

The plane was rented for him by the company

When Brad heard that Jason

was not doing as well as he thought he was

When his son came out of the interview

Told him the results were good

The teacher was very impressed with him

There was a good chance he would be accepted

He invited Fisher to dinner right away.

Thanked him for helping his son

Brad talked about the fact that Jason didn't have a private jet.

The plane was rented by the company

Fisher said he had a private jet

Because he owns that company.

Brad's face changed suddenly when he heard that

His pride took another 10,000 points of damage

And then Fischer went on to brag about how successful

How successful his business was

These words were almost like rubbing salt into Brad's wounds

The meal was a bit painful for Brad

Brad and the kids went to the music hall

With the music in the background

Brad began to reflect on himself

Feeling that he had been thinking too much in his head

It was either self-promotion

And never listened to music seriously

We'll see you here in this movie

This article was published by the #author at #Time on the #website name, if in doubt, please contact us.
本文链接：https://www.toomic.com/movie/161.html