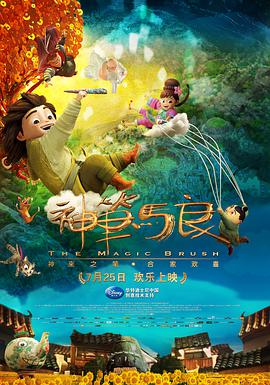 Today we bring you a story about a magical pen and horse.

The main character of the story is a sheep herding boy, Ma Liang

Although he works as a sheep herder every day

But he is very good at drawing

So, he made himself a rotating brush

One day, on his way to herd sheep

He met a group of soldiers hunting a deer

So Ma Liang made a quick decision

painted a hidden costume for his lamb

Then, he painted on the bamboo according to the geographical advantage

Perfectly lured the soldiers to the other side

On the other hand, an immortal with ink came to Hundred Flowers Village

This immortal has a great origin

A long time ago

Taotie and Poor Qi did all kinds of bad things

The Immortal with ink could not stand it anymore

He went up and defeated them one by two

Then he put them into the alchemy furnace

He turned it into a powerful pen

Then, he came to this village to find the destined one

As to why he was looking for the destined one

Then at this time

There was an annual fireworks display in Hundred Flowers Village

All I could hear was boom boom boom

The cannon fire was aimed at us

This person must be up to something

It turns out that a gold mine has been detected in this village.

So they want the people to move out of the village

This country is not the emperor's?

If you want gold, just call someone to mine it

Why go through all this?

What kind of logic is this?

So the general took the opportunity to take the pen away

Not only the pen will be taken away

The inked immortal hiding in the painting got angry

Directly out of the fight a surprise

Then the general just withdrew

After the Immortal Ink Painting appeared

He thought that this Ma Liang was the destined one

He gave him a magic brush

Informed the village of Hundred Flowers will go through an ordeal

Ma Liang had to use this brush to defend his home

You must have a beautiful picture in your mind

The magic pen will help you overcome the darkness

When he received the pen, he didn't know what to do with it.

It took one night to be sure

Whatever he drew with this pen would come true

Then he had a cat and a mouse pets

And the amazing thing is

All the things drawn by Ma Liang could speak human language

Go back to Baihua Village and smash it for me

General's own brain to make up

Then find an excuse to force the development of the plot

The villagers' cattle were taken away

Ma Liang to comfort his companions

Draw a cow out

In order not to be discovered

So he simply made it invisible

To scare away the soldiers

After that, Ma Liang carried out the traditional virtue of helping others

He helped his neighbors in the village to draw something

The water source was blocked

Then he drew water

When the general was puzzled

Crow returned to inform the existence of the magic pen

Then the general began to turn his mind to make trouble

And the villagers of Baihua Village

The villagers of the village are getting greedy

All of a sudden the village began to riot

Everyone for the gold coins to pull the money tree bald

This gold coin is eaten

At this time, Ma Liang was invited to the car to attend the Emperor's 6th birthday

This is a Hongmen Banquet

The general ripped his face off

Snatched away the magic pen

Turned the emperor into a dog

Ma Liang was turned into ink

The others could only keep stalling for time

Because the general had evil thoughts in his heart

So he can only change into all kinds of terrible things

For example, the evil dragon

Powerful rendition of lifting a stone to hit his own feet

He was fooled by that dragon

The magic pen in his hand just fell down

And Ma Liang entered a world of paper

And met the inked fairy

But the Ink-Splash Fairy still said the same thing

As long as you have a beautiful picture in your heart

The magic pen is in your hand

On the other hand, the money tree and the mouse tried their best to get the magic pen

At this time, the lantern reached into the world of paper

Then, just as the general was about to go on a killing spree against Hundred Flowers Village

Ma Liang set off the fireworks

Use the magic pen to bring down two cars

However, Ma Liang's little friend, Xiaomian, was taken hostage by the general

Under the resistance of the villagers

Ma Liang was still caught by the general

Ma Liang drew all the gold under the village

He also made a giant gold cat

Then, Ma Liang was forced by the general to get on a boat to get the gold from the sky

Although, Ma Liang had tried his best to stop

However, they still got close to the golden fortune cat

Just when everyone was engrossed in digging for gold

Finally, Ma Liang went home on the paper horse given to him by the lantern

The emperor also reverted to human

Although the logic is a bit problematic

However, the truths in the story are still worth learning

For example, even if a person with darkness in his heart gets a magic pen

can not draw everything he wants

Only those who do not forget their original heart

Money is an external thing

No matter how important it is, it can't compare to family love

So if you have a magic pen in your hand

What do you want to draw?

This article was published by the #author at #Time on the #website name, if in doubt, please contact us.
本文链接：https://www.toomic.com/movie/244.html