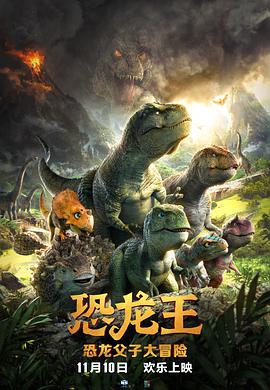 A Tyrannosaurus Rex has been bullied by small dinosaurs since he was a child.

The carnivorous dinosaurs wanted to eat him.

Instead, he became good friends with Triceratops and Pteranodon

He defeated the most powerful mutant fire dragon and became the king of the forest.

Our main character, Pimple, is a small Tyrannosaurus Rex

Since childhood, he has been bullied by the bear children of the king next door

He is a meat-eating dinosaur

He was bullied by a grass-eating dinosaur

After he chased away the other family's bear

He also gave the little lump a hard time

He said that we are the Tyrannosaurus Rex, the king of the forest.

At dusk, Daddy took Pimple to the mountain

He said to the little lump in a deep voice

My son, this forest is my hard work and hard work

How can I trust you with this forest in the future?

For a good hunter, the most important thing is to have self-confidence

He said that he wanted Pimple to start attacking the other dinosaurs.

As a result, Triceratops flew Pimple into the river.

Looking at his son who can't even swim

When he got home, the little lump hid in a hole in the tree and didn't want to come out.

Whenever he thought of his mother drowning

He was very scared

He couldn't help but scold Pimple

He knew he was trying very hard

A meteorite fell from the sky at night

It meant that the era of dinosaurs would soon be over

No matter what happens

Dad will always be by your side

He ended up with a dog's ass.

That's when the hilltop punk, Dreadnought, came over.

Knowing that Papa Tyrannosaurus wasn't there.

They were going to kidnap Pimple.

Pimple called out for his father

But by the time Papa arrived

In this mountain forest

Dad was too big to catch up with him

The dinosaurs set a trap

Fell into the river and died

The little lump was taken to the volcano

There are also many dinosaur children here

They were all locked up here.

From her, we learned that

This is a dinosaur breeding ground

They catch the baby dinosaurs and feed them.

When they are fattened up, they catch and eat them.

But he was also bullied by the other dinosaurs

He doesn't even have a place to live.

The dinosaur was too smelly

So the baby Triceratops was never eaten.

This one tried to sneak up on him, but he fell on his face.

He was conquered by Master Bambi on the ground.

It turns out that the dragon's girlfriend was killed by the dinosaur.

Now he is going to seek revenge on the dinosaur.

Although the beauty of the nail dragon intelligence is not okay

But their nose is very good

They can smell for hundreds of kilometers.

Passing through the canyon.

Master Bamm-Bamm insisted on going in.

As a result, he was attacked by giant prehistoric scorpions.

One scorpion was as big as a Tyrannosaurus Rex.

But he was also stung by a scorpion.

Master Bam will burst at any time

As he passed the cave, a female Tyrannosaurus rex appeared.

Without saying a word, she took a bite out of Master Bamm-Bamm.

Master Bam was no match for her.

In fact, Tyrannosaurus Jade came with herbs to save Master Bump.

Every day at meal time

Dinosaur will throw food down from high up

The pterodactyl in the sky was very lucky

From time to time, they would come to steal food

He brought in wild fruits

Blue hit the rocks with his tail

But their behavior soon attracted the dinosaurs

Poor Hornbill was captured by them

In order to save Kok Kok Kok

They captured the little pterodactyl in the sky

The little pterodactyl told the truth.

Under the volcano there was a giant mutant dinosaur.

He was the boss of the dinosaurs.

He fed on all the little dinosaurs he had raised.

When they found out Kakuro was going to be eaten.

Pimple went to Big Red to talk to him.

If they continued to sit around and wait for death

One day they would all be eaten.

It's better to unite and defeat the dinosaurs now!

The pterodactyl was bribed with bones

He became the commander in the sky.

Waiting for the dinosaur to fall asleep.

Pimple launched a prison break with his brothers.

But just as they got to the bottom of the volcano

The dinosaur found out that a dinosaur had escaped from prison

Pimple and Blue were caught in the Mutant Dragon cave

The next day, the little pterosaur was also caught by the dinosaur

While they were being tortured to make a confession

They were caught by the dragon

Before they died, the three dinosaurs

Before they died, they told me that Pimple and Blue were on the volcano.

The mutant dragon sent out all the dinosaur minions

To defend themselves from the Tyrannosaurus.

On the other side of the breeding ground

Red saw that the dinosaur had been defeated.

He told the dinosaurs to run away.

The mutant dragon was angry.

And the volcano began to erupt.

To go into the volcano to save Kokone

They had to take the water route to do so

Little lump in the encouragement of friends

By the time they reached the volcano cave

Fortunately, Kakuro had not been eaten by the dinosaurs

Even the Tyrannosaurus was only as tall as a toe in front of him!

Cuihua took the children to escape from the volcano cave

Master Bam stayed behind and bit the dragon to stop him

As a result, the volcano burst into lava

And in the process, the cave opened an exit

Several dinosaurs escaped from the crater

Outside the volcano, there was another world of grassland.

Even better than the environment they lived in before

They will start a new era of dinosaurs here

It would be a world of dinosaurs for the little bumps

This article was published by the #author at #Time on the #website name, if in doubt, please contact us.
本文链接：https://www.toomic.com/movie/277.html