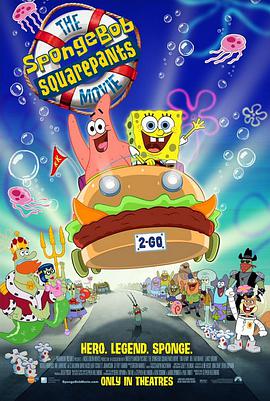 Do you know how SpongeBob brushes his teeth?

Is the most important day

Because the Krusty Krab restaurant is opening its second branch today.

SpongeBob SquarePants as has won 374 consecutive

medals for the best employee

He thought he would be deserving of the manager's position.

On his way out the door, he made a date with Patrick

to celebrate in the evening.

On this side of the restaurant, Mr. Krabs was being interviewed by a reporter

while Plankton, watching from afar, was furious.

The underwater world will suffer a major crisis

At the opening ceremony

Mr. Krabs was about to announce the name of the new manager

And the SpongeBob SquarePants on the stage can't hold back any longer.

SpongeBob rushes to the stage to make a speech.

You didn't get the manager's job.

Mr. Krabs tells him why

You're still an immature kid.

You're too immature to be a manager.

He infiltrated the kingdom of Neptune

And stole the king's crown.

And this crown is very important for the king

Because he could hide the king's hairline

On the other hand, SpongeBob was crying in the restaurant.

He tries to console himself

（"I just need to stop thinking about it. It's better.)

(Hey, isn't that the manager of the Krusty Krab II?)

It's true that when you're sad, you have to eat.

I don't know how many ice creams they ate.

Until they got drunk.

They collapsed directly on the stage

The king came to the restaurant

He angrily pointed out

Mr. Krabs was the thief who stole his crown

Because he had left evidence at the scene

(I stole your crown. - Krabs kept it)

At the moment of crisis

The kind-hearted SpongeBob put aside his grievances

He wanted to save Mr. Krabs

With the help of the princess

He reached an agreement with the king

As long as the crown was recovered within six days.

The king would pardon Mr. Krabs.

But before the king left, he froze Mr. Krabs into an ice sculpture.

According to the princess' information.

The crown was sold to the dangerous Shell City.

The optimistic SpongeBob and Patrick set out on an adventure.

This is SpongeBob's car.

The most important thing is

Take the shovel key to start the car

SpongeBob and Patrick set off for Shell City

Inside the Krusty Krab restaurant

Only the Krusty Krab is left, frozen in ice.

At that moment, Plankton came marching in.

This time no one could stop him from taking the Krusty Krab recipe.

On the other hand, SpongeBob SquarePants and Patrick.

But optimistic they choose to go on foot

Until they were exhausted from walking until darkness

(5 days away from Shell City

Patrick found the car that was taken from the roadside

But the car keys were gone

In a dimly lit tavern

They found the keys

Patrick took advantage of the chaos and stole the keys

Two people rushed to drive away

And at this time

He was driving his car on the road

He soon noticed that

Today the residents of Hailey City are wearing strange hats

Even the babies were wearing them

Everyone who eats at the restaurant gets a free hat

Squidward came to the restaurant in a rage

Expose the plot of the boss

And Plankton calmly pressed the button

The restaurant raised the signal tower

Helmets were snapped off

All the residents were under control

This is the ultimate goal of Plankton's evil plan

To conquer the underwater world

SpongeBob and Patrick are on their way

They were attacked by a giant creature

The two jumped out of the car

The monster was swallowed by a giant Neptune creature

Looking down into the dangerous abyss

Maybe he is really just a child

Can not complete such a difficult task

And in the face of Patrick's encouragement

SpongeBob just pulled down his pants

This is the nature of your childishness

At that moment the princess came over

The princess encouraged them to continue the task

Because they are now the

The only ones who can save the underwater world

Plankton had started to build his own kingdom

All the inhabitants had become slaves

Squidward was fanning himself

SpongeBob and Patrick were even more devastated

The princess saw that encouragement also has no effect

Think of a trick

Children can not complete the task

Then I will use magic to turn you into real men

The princess wanted to turn SpongeBob and Patrick

Secretly put a beard on their faces

And SpongeBob and Patrick found out

That they had grown beards

Real men are not afraid of any danger

They jumped off the deep end

And they went on a journey

Across the abyss and back on the road

But what awaits them is a killer sent by the gangster

In the midst of danger

The killer was flattened by a foot

SpongeBob looked up to see

It turned out to be the most terrifying Cyclops

The giant grabbed them and brought them to land

Put them on the table

But they saw the crown

So this was Shell City

Even though they were children

No one believed them

But they managed to make it

The two shed tears of emotion

As their lives were in danger

They sang their favorite nursery rhyme

Tears rolled down and clumped together

And together they became love

In the final song they were dried up in the sun

The story of SpongeBob SquarePants is over

Of course the story is not really over

The tears just flowed onto the wire

It followed the line into the socket.

The smoke from the short circuit triggered the sprinklers.

Water spread all over the room

They came back to life

And the other sea creatures in the room

Together they took down Cyclops.

SpongeBob and Patrick escaped to the beach with their crowns.

They met the Thunderbolt on the beach

SpongeBob and Patrick reached the top of Bikini Bottom

They were able to stop the King's execution of Mr. Krabs just before the deadline.

But it was still within Plankton's plan.

The helmet that fell from the roof took control of the king.

The rest of the controlled inhabitants swarmed up.

Plankton is still mouthing off.

Do you know why you lost?

Because you're just a little kid.

But SpongeBob had something to say.

But I've crossed the most dangerous abyss under the sea

And I defeated Cyclops.

And I rode the Thunderbolt and brought back the King's crown.

What everyone thought a kid couldn't do.

SpongeBob transformed in an instant

He flew into the air and played his electric guitar.

The lasers from the electric guitar shattered the control helmets on the heads of the inhabitants.

And Plankton was arrested.

SpongeBob finally got what he wanted.

got the position of manager

So what if you're a kid?

Although people around you say you are not mature enough

But how should we define the so-called adult and mature?

As long as you are brave and optimistic

With love and justice

Then you are the best version of yourself

This article was published by the #author at #Time on the #website name, if in doubt, please contact us.
本文链接：https://www.toomic.com/movie/399.html