Animation film "The Future of the Future" commentary text Commentary

Animation movie "The Future of the Future" commentary text commentary 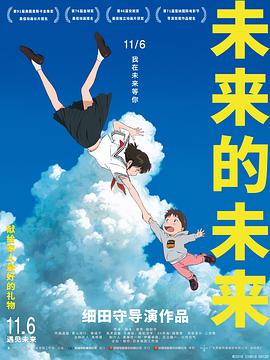 Today we bring you an animation movie

The Future of the Future

In the corner of a city

There is a family of three

The father is an architect

Mom works in the editorial department

Their son, Ah Jun, is four years old this year

His mother is finally coming home from the hospital today

And will bring back a little baby

He's been waiting at home for so long

Ah Jun is playing with trains in his room by himself

Finally mom was accompanied by dad

His face was full of hidden surprise and curiosity

Since the family had a little baby

Dad resigned from his company

Working at home and doing housework on the side

But it didn't last long

Mom's maternity leave will soon be over

So that Dad could take better care of the family

Mom started a series of strict training for dad

and mom, who was busy taking care of "Ah Lai"

This made Ah June very disappointed

It was as if all the energy of mom and dad

to her little sister

They seemed to have completely ignored June's existence

He was considered to be disturbing his sister's nap.

The frustrated Jun had to hide in his room by himself

When the adults were not around

He would sneak up to her cradle by himself

Pinching his sister's face and nose

Trying to teach her a lesson

She burst into tears when her face turned red

She attracted her angry mother

But her mother thought that June was being unreasonable.

Suddenly, the trees in the courtyard started to glow.

June came to a strange room.

At that moment, a man approached him.

He turned out to be Yuuko, the family's pet dog.

He was once the treasure of his parents

It was because of the birth of Jun

He had lost all his love and affection.

Yuuko teased him with his words.

At last, he felt the loss of favor.

When Yuuko wasn't looking, he took Yuuko's tail and played with it for a while.

But soon after, Jun returned to the real world.

Although he felt strange

But Jun didn't care too much

Soon it was time for Daughter's Day

My mother, in accordance with the custom

But daughter's day dolls can not be left too long

Otherwise it will affect the daughter's marriage

The next day the mother went to work

Before she left, she asked her father

Remember to take down the dolls

But the father was busy doing housework

he forgot about it

On the other hand, Ah Jun was bored because there was no one to play with him

He quietly put a snack on "Lai's" face

Then he sneaked out to play in the courtyard by himself

At that moment, the tree started to glow again

Once again, Jun traveled through time and space

This time he saw the grown-up "Alai"

Otherwise, she can't marry the man she likes

Because she hated "Lai"

But "Lai" started to tickle June

He made Ah Jun's face red and laughed

He agreed to "Lai's" request

Asked dad to put away the dolls

But dad was busy with work

He said yes, but he didn't care

In the end, thanks to Yuuko and Okun, who became human

"Lai" finally put the dolls in the box

A few days later, June asked her mother to buy her a bicycle.

June was upset and started to throw a tantrum

Threw the train all over the floor

She even drew her mother as a witch

When she saw it, she scolded him.

In a fit of anger, June went into the courtyard

At that moment, the tree glowed once again

June felt like she was in the underwater world

In the underwater world

As a child, Jun burst into tears

He didn't want to listen to "Lai"'s advice

He ran away desperately

But the school of fish sent him to the rainy street

And he saw his mother when he was a child.

His mother was the same as Jun.

She was a naughty child

She was often scolded by her grandmother for making a mess in her room.

She was scolded by her grandmother for making a mess.

She also had a younger brother.

Soon after, Ah Jun returned to the real world

At the same time, his mother was talking with his grandmother

This was not what she wanted

She didn't want to get angry and scold anyone

In her heart, June was always her baby

When she woke up, June finally understood her mother's pain

She touched her mother's head

In the end, she got the bike she liked.

With a bicycle in her possession

So he wanted to remove the wheels too

To learn how to ride a bike for real

At first, his father patiently taught Ah Jun how to ride a bike

But his sister in the cradle suddenly started crying

In order to take care of "Ah Lai"

Ah June looked at her father's back

Feeling abandoned by her father

He started to cry too

Angry, Jun returned from the park to the courtyard

He threw his helmet onto the grass.

Just then the tree started to glow again

The man was tall

But with a sloping foot

With the man's help

Of course, June was scared at first

But the man told June

If you look ahead bravely

So June began to enjoy the fun of horseback riding

He also rode with the man on the speeding motorcycle

Now he no longer began to be afraid

He decided to face all this with courage.

Back to reality, Jun picked up the helmet he had thrown away

This time, without the help of his father

He still learned how to ride a bike

Jun opened the photo album he had put aside

In the album, she saw

The man who had taught her to be brave

It turned out that he was June's great-grandfather.

The holidays were fast approaching

Mom and Dad decided to take June and "Lai" on a trip.

Instead of yellow pants, she got angry

He even had a fight with his dad

He secretly hid in the bathtub

Waiting for his family to panic and look for him

However, his father and mother did not come looking for him

When he reached the courtyard, the tree started to glow again

This time he saw his future self

Otherwise he would definitely regret it

He stepped onto a train of unknown origin.

There was no one on the train

In a short time, Ah Jun arrived at the platform

But because he didn't have a ticket, he was stopped by the exit gate

He went to the lost and found

Trying to find his way home

The robot at the lost and found said

Then, June was sent to a strange station.

Then a black Shinkansen stopped at the platform.

When the door of the Shinkansen opened

June was sucked in.

He saw the chairs in the shinkansen

All of them were in the shape of skeletons, and he was terrified.

Fear of the unknown made him desperately

He escaped from the Shinkansen

At that moment, he suddenly saw his sister

appeared on the platform of the Shinkansen.

In order to prevent his sister from becoming an unclaimed child

She was sucked in by the Shinkansen

Jun shouted that I was "Lai's" brother

She grabbed Okun's hand and flew up into the sky

She took him out of this horrible world.

The tree in the courtyard started to glow again.

That tree is the record of the family's past

A testimony of time, present and future.

To see their father and mother when they were young

Perhaps the things that Ah June saw were ordinary and trivial

But it is because of these small and trivial things

that made them what they are now.

Back in reality, Jun looked at his young sister.

Now he finally understands the meaning of brotherhood

He looked at "Ah Lai" and smiled happily

This film is really for adults, isn't it?

For adults to reflect on

Don't neglect the care and education of the first born

This article was published by the #author at #Time on the #website name, if in doubt, please contact us.
本文链接：https://www.toomic.com/movie/400.html