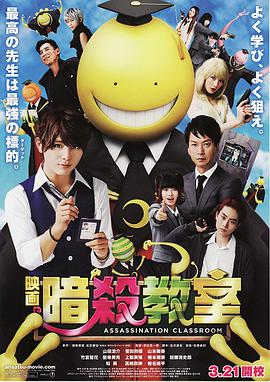 Three months ago, he blew a hole in the moon

Now wants to destroy the Earth

But seeing the weak humans

Decided to have some fun

He applied to be a teacher at a school

And made a bold statement

Asking the students in his class to assassinate him

If he succeeded, he would give up destroying the Earth

But killing him wasn't easy.

It can be picked up in a matter of seconds.

It takes only a minute to circle the earth

The government offers a reward

And receive a reward of 10 billion

Students, the first thing you do in class every day

That is to point a gun at the teacher

Even professional female assassins have infiltrated the school

Shooting at the yellow ball.

The house collapsed without success

And he got himself killed for nothing.

He became the English teacher of the class.

After that, the students began to learn assassination skills

The boy Xiao Zhu pretended to hand in his homework

He used his hidden dagger to stab him hard

But he was easily caught by the wrist

He hugged the teacher

A grenade was hidden in his chest

followed by an explosion

Xiao Zhu was not hurt

But the teacher disappeared

Just as everyone was about to celebrate

But his face instantly turned into color

But not in the way of your own body

A net actually wrapped around him

But the teacher instantly teleported to the roof

After disdainfully taunting the students

Gave them a push of homework

At that moment a student stood out

Took out a gun and pointed it at the teacher

Then jumped off the cliff

So he wanted to use the teacher's pity

To complete the assassination plan

But the teacher quickly used his arm

To make a spider web to catch him

Seeing no progress in the assassination of the students

The government decided to use a secret weapon

Installed a robot in the first class

One look at the shape of the robot, you know not to mess with

When we first met, four Gatling machines were installed.

But he dodged it easily

He didn't even miss class

He didn't take it seriously.

After class, the students still have to clean up the shells

The teacher could stand it for a long time.

The students were devastated

The robot was directly tied up with chains

Suddenly there was a loud noise from the ceiling

A white-haired man fell from the sky

As soon as you look at this B character, you know very strong

He said he and the teacher are enemies

He came here to kill the teacher

This is definitely the cutest teacher I've ever seen

But the whole world wants to kill him

One day a challenger came to the classroom.

The duel between them was about to start

One of the yellow ball's tentacles was cut off

At that moment, several tentacles grew out of the white haired man's head

The next second he immediately launched an attack

The teacher who had been dodging

Physical strength is a bit unable to keep up

He felt difficult for the first time

After a few rounds

Even cut off three tentacles of the yellow ball

But when the white haired man attacked again

His tentacles were all melted

Then the yellow ball caught him in the net

Throwing him out of the window

The duel ended in a victory for the teacher

Next, the students' textbook knowledge

The teacher used the shadow splitter

The students were worried about his health.

But the teacher pointed to the window and said

I still have my doppelganger resting

In chemistry class, a female student brought a prepared D-pill

She asked the teacher to take it

The teacher drank it without saying a word

But it didn't work for him at all

Soon the students discovered a weakness of the teacher

Whenever he touched water

His head would become edematous

This weakness was recorded by Xiao Zhu

That day the teacher took everyone to the playground

Directly he spun and jumped

After a few flashes, his figure disappeared

The next second the teacher reappeared

But like a meteorite, he crashed into the playground

The scene was chaotic

The dust cleared away

He brought back the satellite

Want to kill him

You have to study hard

Next, in order to stimulate everyone to study

He promised that if he got the first place in a single subject.

He can cut off one of his tentacles

But don't get too excited.

First of all, we must carry out the devil training

You can't imagine how scary this teacher is

He'll fly you across the ocean for poor English.

Listen to the pure English

Originally the worst class in the school

According to the agreement

The teacher will cut off 6 tentacles

The students were armed at full speed

The teacher had chains tied to

Use the gun to break the teacher's tentacles

Knowing that the teacher is afraid of water

Take the gun and shoot wildly

This time he received a box of rice, right?

Suddenly there was an explosion

He wrapped himself in security glass

It takes 24 hours to release this state

The students around him fell one by one

A car rushed in

They threatened the students to hand over the teacher

Or they would kill everyone

The teacher wanted to hand over the yellow ball

But Xiao Zhu saw the situation was not good

He and his classmates took the ball and ran away

They jumped onto a power tower.

The white haired man also chased after them

Seeing that the yellow ball was about to be robbed

Suddenly there was lightning and thunder in the sky

It was raining heavily

Then Xiao Zhu cut off his tentacles

Back at school the other bad guys were subdued

Put the soldiers in the cement

The government came to the school and took the teacher away

They have developed a biochemical weapon to destroy the teacher

In front of the screen, the teacher said goodbye to his classmates for the last time

He said he could be everyone's teacher

He was so proud.

And then disappeared from the screen

As everyone cheered and celebrated

The students next to him shed tears

After all this time together

Everyone loved this teacher

Then a pair of tentacles handed tissues

Yes, in fact, he didn't die

Although the whole movie is about the assassination

Watch it from the beginning to the end

There is a warm feeling in your heart

Assassination Classroom" was released in 2015

is the emotion conveyed by the bond between each person

Or the friends and enemies we meet along the way

It is the most beautiful encounter in life

This article was published by the #author at #Time on the #website name, if in doubt, please contact us.
本文链接：https://www.toomic.com/movie/68.html