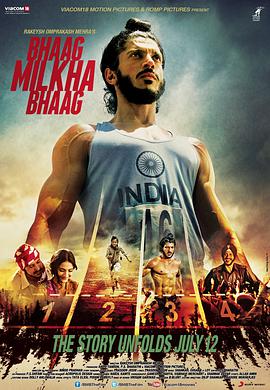 This man is running in the barren desert.

With 100 pounds of tires strapped behind him.

By running all the time

The man is exhausted.

Finally collapses to the ground.

The coach kept giving him strength:

The man got up again.

His name was Milkha Singh.

He competed in the 1960 Olympics in Rome.

The athletes enter in order.

The Sikh nicknamed "The Flying"

He has broken world records.

Winner of the last Asian Games.

Everyone has high hopes for him.

The gun went off.

The strength was clearly higher than the other players.

His coach was cheering on the court.

He turned his head.

People didn't have time to wonder why he turned around.

The race was already over.

He was criticized and humiliated by newspapers, radio and other media

As an athlete who had won many championships and medals

In the eyes of the Indian people

There was no room for his defeat

No one cares about the reason for his defeat.

The image of Milkha looking back on the field of play

It's the scars and tragedies buried deep in his heart.

It all started when Milkha was a child.

As a child, Milkha

He and his family lived in what is now Pakistan.

It was a village right next to the Indian border.

The family was very happy.

Young Milkha was a hard worker and a good student.

As a Sikh, Milkha's family

The family was forced to move to the new Indian side

unless they changed their faith to Islam.

decided to defend their faith and their land

They were eventually massacred by the Christians.

The father was covering the young Milkha's departure

He was killed from behind with a knife by bad men.

The memory of his father's last cry for him to run was never far from Milkha's mind.

The sound of his father's last cry for him to run.

And he could never forget

Fortunately, his brother-in-law escaped with his sister.

Later, he was finally reunited with his sister's family in India.

Together with other children

Stealing coal from cars to sell

When he grew up, Milkha

Met a girl in the village where he lived

But the two began to fall in love

Not long after, he was caught by the police for stealing

His sister pawned her gold earrings

In order to get his share of milk and eggs.

He took part in a long-distance running race

Milkha, who had been running for his life since he was a child

He won the admiration of his army coach, Hari.

They were both Sikhs.

With their turbaned features

The coach took him to the sports field

To prepare for the upcoming military games

Here, he met Ahxiang from the national track and field team

He was very curious about the team uniform on Ahxiang

But A-xiang was very disdainful of his stifling thickness

Then he asked him to have a competition

Miha was not the least bit out of his league

But then Milkha suddenly got hurt.

He stumbled to the finish line and fell to the ground

But his superiors were very impressed with his performance

decided to select him for the race

Later, during a training session

Milkha also met Ranveer, the coach of the national team

Seeing that he could be coached by Ranveer

In the years that followed

But he was jealous of Ah Siang.

He led an attack on Milkha in the bathroom.

When questioned by the coach

When he appeared on the field with his shoes

Both coaches were surprised

They tried to discourage him from giving up the competition

He stood on his own track

As the signal sounded

He ran forward with severe pain

Although he was behind Ah Xiang at the beginning

But he quickly overtook his rival

In order to fight for this breath

He couldn't care less about the wound that started to bleed

Miha's bandages began to fall off

But he finally took the lead

He took the first place.

The national team coach came over

He said to Milkha, who was lying on the ground.

He's made the national team.

When he returned home in his national team uniform

His sister didn't recognize him at once

Milkha let his sister try on his new uniform

And he found a surprise for her in his pocket.

A pair of gold earrings

When his sister bailed him out.

She had pawned them for her own earrings

It was something he always remembered

After the two siblings met.

But he was surprised to learn that

The girl he missed had already married far away from home

As Milkha reminisced on the bridge

He said goodbye to the past once and for all

From then on, he was free to continue his brilliant life.

As soon as he returned to the army, he began to prepare

He was ready to leave for a foreign competition.

It was the 1956 Melbourne Olympics.

The day after the opening ceremony

Micha and his teammates met

The official technical advisor assigned to them

He met his granddaughter at the technical advisor's home

The two young men fell in love at first sight

A spark of love emerged

Micha was in love with her.

On the day of his race, he was clearly out of shape

He ran in the bottom of the race

He didn't respond to his girlfriend's consolation

Turned around and ran to the bathroom

Slapped himself hard in the mirror

But before he left, Milkha realized

It's all his own fault

He said a final goodbye to his girlfriend

After all, in those days

It was almost impossible to keep in touch with each other after that.

Milkha began to train even harder

With the encouragement of his coach

Whether it was windy or raining

could not stop Milkha's progress.

This is the Pakistani sprinter, Khaliq.

Milkha and Khaliq competed together.

Milkha gave his best effort and chased after his opponent.

He finally reached the finish line at the last minute.

He crossed the mountain of his heart

For the rest of his career

He continued to achieve one good result after another

He made headlines in all the newspapers

And broke the world record at the time

When he returned, he received a commendation and promotion from the military

He gratefully hung his medal around his coach's neck

He missed the Olympic medal in 1960

inexplicably missed out on an Olympic medal

But still, he and his teammates were received by the Prime Minister

After the meeting, the Prime Minister announced

In order to strengthen the friendship between India and Pakistan

The two countries would hold an Indo-Pakistani Games

And Milkha was chosen to represent the athletes in track and field.

When it comes to Pakistan

The old pain in Milkha's heart flared up again.

He refused to go to Pakistan.

When the Prime Minister heard about the pain in his heart.

sent a special delegation to condole with him

Later, in private, he spoke to him with emotion and reason.

He went to his former home.

He was once again immersed in the memories of grief

He couldn't help but fall to his knees and cry

The next day the games began.

The people of both countries were watching.

The competition between Milkha and Khaliq.

As the gun went off.

Khaliq was at the front of the pack

Living up to his title as the Asian Cyclone.

He left Khaliq far behind him.

The huge difference in power

The crowd started to applaud him.

His friends and family in India

They also cheered for him.

A public holiday for Mihadi

Amidst countless cheers and applause

The story came to an end

This is a film based on a true story

A man's success is not an accident

His discipline and continuous breakthrough are essential

If your life is confusing now

Then you must see the story of Mihasingh.

This is the end of this video

This article was published by the #author at #Time on the #website name, if in doubt, please contact us.
本文链接：https://www.toomic.com/movie/70.html