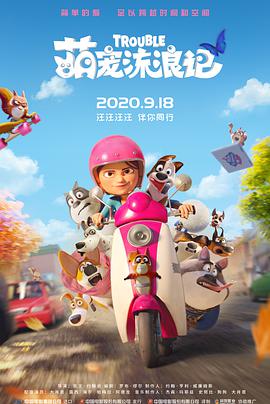 The main character of this film is very powerful

He is a very cute dog

Before he woke up in the morning

A servant comes to greet him

After waking up, he has to throw a tantrum

Then, sitting on his exclusive throne

Chewing on his favorite little doll

Then the servants groom him, wash his face, brush his teeth and so on

And then put a diamond-encrusted collar on him

So that he can show his noble status

After pooping, he has to spray his butt with perfume, which is simply too extravagant

After everything is ready

Ha is going to meet his master

His master is an old, rich woman of a certain age

From the car she drives, you can see how rich she really is

The old owner uses cucumbers for her face mask

Ha is using his dog food as a mask

The old master went to have a Thai massage

The waiter also wants to give Ha a little puppy scratching

After shopping with his old master, he can't go home empty-handed

Ha has to buy some things too

It's time for lunch

This is Haha's favorite steak

The master wipes his mouth with a handkerchief

Milkha also wants the servant to wipe his mouth

Until the evening after watching TV with his master

The day is not over

That's what Ha does every day.

More comfortable than even the prince

Ha greeted his master as usual

But the master did not appear

But the servants ignored him

Ha waited on the window sill all day

He still didn't see his master

It turned out that his old master had died last night

Since he had no children.

His niece and nephew were interested in the old master's inheritance

They hated the arrogant little Ha.

When they moved, they put Ha in the van.

Luckily, the owner made a will before she died.

Whoever wanted to inherit her estate

Then they had to get Ha's consent

The consequences of losing Ha!

Ha had a bumpy ride in the van.

The dirty van made him feel humiliated

Ha misses his old master so much

A squirrel makes trouble on the road

The truck made a sharp turn

He was thrown out

The next day, Ha woke up from his squirrel hole

He happened to be hanging in the squirrel's hole.

Ha tried to explain that he didn't do it on purpose

But the pine nuts still fell out of the hole

The squirrels had been working all year.

All these rations were gone.

The squirrel brothers were furious.

Since they dare to touch my territory

I'll give Ha a taste of his own medicine

Hsiao-ha desperately called for help from his servants.

But where were the servants to save him?

The squirrels took away his diamond collar.

Without the collar, he couldn't prove his identity.

He wanted to go home.

But he didn't know the way

And there was a free sausage to eat

Ha ate all the way to the top

He found out that it was Big Black's food

He gave up and had to spit it all out

At that moment, the sausage boss came

The two guys had to run for their lives

Luckily they were not caught

It's not good to offend the squirrel gang

Luckily, Blacky was there to protect them

The squirrel boys didn't dare to do anything rash

In this small woods of the park

Blackie became the only support for Ha

Blackie will also sympathize with him

Dogs who have owners since the day

All chatting in the park

Long Ears said that his owner tried to murder him

The appearance of Ha interrupted the gossip of the dogs

They all turn their noses to eat melons

Want to know the gossip story behind Ha

They found out that Ha never wipes his butt

They performed how to wipe their asses in public

And only today did Ha know

The feeling of wiping his butt is so comfortable

Bulldog says that Ha is a stray without a collar

Stray dogs have to be taken to shelters.

Ha says he has an owner.

He just hasn't found one yet

As a result, Ha was sent to the road by them

Ha was about to be run over and killed

Then a little girl appeared

The little girl was a stray singer

She couldn't afford to keep a dog

Listening to the girl talk about guitar

After Ha got the girl's leash collar

to prove that he is not a stray dog

It turns out that the dogs pushed Ha onto the road

Just so he could meet a loving owner

These dogs are really clever

Ha accidentally stepped on a nut

The squirrels came after him again

Ha asked the squirrel boss to return the collar.

After all, it was the only thing he had left.

The dogs couldn't stand it anymore.

Since they had the nerve to steal from the Dogs.

The Dogs and the Squirrels then started a battle in the park.

The black-hearted man and woman hired an animal hunter

He searched for Ha.

He used his dog's nose

He caught the boss squirrel with the collar

The greedy squirrels were bribed by the hunter with pine cones

When the little girl left the house

They slipped into the little girl's house

Ready to kidnap Ha together

To trade him for more nuts

Instead of being taken by the squirrels

Instead, he was thrown by the landlord to the homeless center

There are many homeless dogs here

And the stray Blackie

But the owner was taken as the culprit

Blackie ran away in anger and started a stray life alone

Ha is his good brother

And the old dog boss

Together they easily escaped from the stray center

The dogs and the little girl followed the scent of Ha

They ran all the way to Ha's old master's house

The door was opened by the old housekeeper who loved Ha

but forgot to pay the hunter cash to buy squirrels

The squirrels were now very angry

No matter how much gold and silver you have

If you don't give the squirrels the cones, they will make trouble.

Finally, the notary couldn't decide who to give the inheritance to

The girl not only could take in Ha-ha

She also received all of Ha's old owner's inheritance

At the same time, Ha's other dog friends

also had a bigger park to play in

All stray dogs and dogs with owners

can make their homes and play in the dog park

This article was published by the #author at #Time on the #website name, if in doubt, please contact us.
本文链接：https://www.toomic.com/movie/240.html