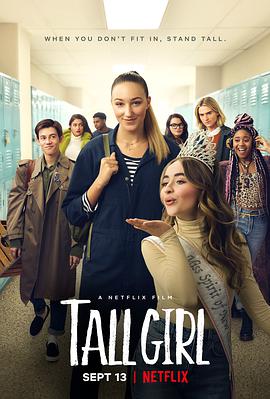 Most boys see her height.

Would immediately run away.

She looks like a monster when she is photographed with people her age.

Her shoes are also a full size 47.

Everyone thinks she's a freak.

Is it hard to be tall?

She never dared to fall in love.

But at the same time, she is lucky.

Why do you say that?

This guy with the milk crate.

The short guy who looks a bit abnormal is called Carl

No one knows why he carries a milk crate every day.

But it was full of Xiao Mei's favorite food.

(We've known each other for a long time.)

(Dating someone shorter than me)

(It makes people realize I'm a weirdo even more.)

If she goes out with a guy shorter than herself.

If she went out with a guy shorter than her, she was bound to get ridiculed by everyone.

This was unacceptable to her.

Carl thought this was ridiculous.

She should wear her own custom-made high heels

To marry the man she loved most.

It's not about height.

Shut up those mouth-breathing dwarfs.

If you don't say yes to me this time.

Where are you going to find a boyfriend as funny and handsome as yourself next time?

But the next moment

Karl was instantly frozen in place

But still, he didn't give in.

"I admit he's better looking than me."

And the answer was almost absolutely perfect

But such a fragrant young man

How could she be easily won over?

She is the school's recognized flower

And Xiao Mei and Cuihua had been rivals since they were kids.

She had been teasing Xiao Mei since kindergarten

Originally, Xiao Mei was only tall.

It was not so much to be teased

But it was because Cuihua had given Xiao Mei various nicknames

Xiao Mei became the laughing stock among her classmates

She thought it was from her boyfriend

She was invited to the prom with him.

This made Xiao Mei very excited

It turned out to be Tricia teasing Mei.

(You didn't really think a guy as hot as Stig would like you, did you?)

(I mean let's face it Jodi)

(You're a tall girl who will never be a pretty girl)

Mei was not convinced.

He said he was handsome.

But Xiao Mei did not believe

Said again to prank her

I will use 48 yards of big footprints on your face

Only after the result is close to find

This time it was really Xiao Shuai

The atmosphere was a bit awkward

With the help of his model sister

That night she arrived at Xiao Shuai's doorstep

He was instantly overjoyed

But the next moment his roommate appeared behind him

It was obvious that Carl had misunderstood

The goddess he was in love with

was here on a date with his best friend

Soon they were sitting on the couch watching a movie together.

Carl was whistling and whistling

While blocking the screen as if nothing was wrong

The two men on the couch were getting warm and fuzzy.

The next side, Carl comes over with a snack.

(I'll be right back with you two)

Carl did not treat himself as an outsider

Sitting directly on his butt between the two

Xiao Mei glanced at him fiercely

But did not notice

Carl's eyes were full of tenderness

Looking at the beautiful girl in front of him

The two just couldn't help but kiss each other

Xiao Mei thought she would be happy with this

But the next day

Xiao Shuai acted as if nothing had happened last night

But what's more annoying is

Only then did Xiao Mei realize

The so-called transfer boy is actually a complete scum

Xiao Mei hid in her room with sadness

No matter how much her parents knocked on the door, she did not open it

Until early the next morning

She woke up in shock

Carl also received a slap in the face

But after Xiao Mei repeatedly asked

She didn't know where the bruise came from.

But looking at such beautiful high heels

But Xiao Mei could not be happy

Because she thought she would never wear them in her life

（"He really likes you because)

When he said that.

Carl seemed to be suppressing something

It seems that he had imagined

He was the one that Xiao Mei loved the most

In a flash, it was graduation season

Xiaomei suddenly received a video from her girlfriend in her phone

As Xiao Shuai's girlfriend, she naturally had to ask why

Who knows that the scum actually to protect his image

He said this to Xiao Mei in public

(So in a nutshell, it means she has a crush on me)

（"Look, I'm definitely not in love with Jodi.)

（Tell her to leave me alone)

There was a transfer student in my class.

He was tall, handsome and smart.

Xiao Mei, who had never been in love before, fell in love with this boy right away

But who would have thought that he was a complete scum

In the face of all his classmates and his new girlfriend

He even said bad things about himself

All this was captured on video

Xiao Mei looked at all this and felt incredible

When all her classmates listened to his slanderous words

They were laughing at Mei.

Carl rushed over with his milk crate

Without hesitation, he smashed it towards the scum

(You say bad things about Jodi in front of the public)

（"But when we were in private, man)

（"You confessed your love for her in front of me.)

（What's crazy is you don't know anything about her, man)

（What's her favorite color? What is the color of her eyes?)

(I mean, Jodi has a lot of good qualities.)

（She's the best of anyone I know)

（She's cooler than all of you put together)

（"Yeah, all of us together aren't as tall as her.)

Xiao Mei could not stop the tears flowing down

So that's how the bruises on his face came about

So that skinny little man was so brave

So he loved himself so much

She picked up the high heels that Carl gave her

Her heart was full of confidence

At the school dance

A woman with the aura of a queen appeared

The crowd instantly makes way for her

He ignores the gossip of the people around him

He walked straight to the stage

In front of everyone

Talking confidently about his shortcomings

(Tall is my true color and I like myself)

(I can handle it)

(Because the high places are so beautiful)

After saying that she won everyone's applause and applause

But Xiao Mei did not stay

At this time Xiao Shuai came out after me

But not with you

After saying that, Xiao Mei turned around and left

There was one place he had to go

She slowly walked up the stairs with her high heels

But Mei asked Carl in an untimely manner

（"But you know the only major point of disagreement is the milk crate.)

（"I really don't understand what you're doing.)

（"Don't put things in your backpack like normal people do)

（I want to be prepared)

Everyone in the movie is the protagonist of the movie.

We all have our own problems.

Usually there is no milk-filled person to save us.

We must slowly realize this

Our uniqueness makes us who we are.

And have faith in it.

In life we are loved by others all the time.

Sometimes a word from someone else

A gesture or even a smile.

is full of love for us.

Maybe we overlook them.

This article was published by the #author at #Time on the #website name, if in doubt, please contact us.
本文链接：https://www.toomic.com/movie/285.html