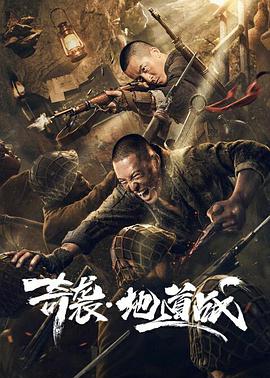 This kind of bun can be eaten or fried

Take a bite, throw it out

Cucumber, take a bite and throw it out It's fried

Pepper can be fried, carrot can also be fried

Tearing ghosts with your hands, hiding mines in your pants

Where did all these operations come from?

With nostalgia for the martyrs and respect for history

In order to cater to the audience's "addiction" mentality, these dramas

The plot has long been divorced from history

In our anti-Japanese team

There is no devil King Kong who can tear apart

There were no flying heroes either

Those martyrs who died for the country

They used their flesh and blood to stop the invaders

So that we can have a better life today

If I have to say that the magic operation

Then the "tunnel war" deserves the honor

The Eighth Route Army and the villagers of Dangmin

With their hands, they built a great underground wall that could be attacked

A great underground wall that can be defended and retreated

The film "Tunnel Warfare" was adapted from this mode of battle

has set a record of over 3 billion viewers

Today, a new film has just been released

To use more sophisticated production

The Japanese army is carrying out inhumane sweeps in North China

Burn all, loot all, kill all

Everywhere they went, corpses were strewn across the land.

They forced him to reveal the whereabouts of the other villagers.

The boy was scared.

He swallowed his saliva

He looked at his grandfather, who was holding a knife to his neck.

The grandfather's face was covered in blood but he shook his head.

He warned his grandson with his life.

Now the boy was left alone to make his decision.

The boy was no longer afraid.

Raising his face, his knife-like eyes

Shot at the Japanese officer in front of him

He too shook his head, slowly but surely.

The officer's smile disappears and he spits

The young boy would rather die

than to reveal a single secret

The villagers huddle in groups in the dusky cellar

They have temporarily escaped the Japanese sweep.

But there's always the possibility of being discovered.

If the devils find out the entrance to the tunnel

The villagers were waiting for death.

Of course, the Eight Route Army guarding the villagers did not just sit there and wait for death.

They made full use of the tunnel's ambush advantage

A group battle in the grass

Before the ghosts can react

Already a large number of dead

The Japanese were at their wits' end

They had to send their ace, Admiral Nakamura.

He's the best sniper in the war.

He was wounded in his left ear.

He was wearing a hearing aid.

He was nicknamed "One Ear".

He's a veteran of the war.

The villagers' surprise attack on the devils' tunnel counterattack

And so it began

The tunnel tactics were mainly defensive, but not offensive.

The biggest drawback is that the entrance is not concealed enough

The "one ear" who observed the dense

soon found the pattern of tunnel connection and distribution

The devils were guarding the entrance.

Throwing incendiary bombs into the tunnels.

The tunnel to save lives. The warm room became a purgatory.

People cried out with their hearts and souls

running to the ground to survive

only to be shot down one by one by the devils.

Overnight, most of the tunnels in the village

were all destroyed by the devils.

The devils' next target

was a small village called Shandi.

What do we have to do?

Fortunately, there's a man from the village.

His name is Xiao Chengzi.

An intellectual who has just returned from his studies in Peking

Having seen the tragedy in his hometown, he was determined to go into battle.

(A scholar, what's the point of asking him to join?)

The handsome boy not only has a good knowledge of mechanics

He is very strategic.

He has a lot of ideas.

He saw the problem at once

The old tunnel had to be improved.

We can't let the villagers die in them anymore.

In the past, we used to use defense as an offense.

Now, we have to use offense as defense.

He has his experience. We have our chaotic fists

How exactly do we do it

First cut the tunnels in different areas into slabs

Both can pass and fight separately

Then we lay traps inside the tunnels

The mechanism, the initiative to attract the ghosts to come in, to catch a turtle in a porcelain

Separate the combat zone of the tunnel from the villagers' hiding place.

It also prevented blockade and sabotage

The Nationalists soon launched the next wave of attack

The devils put on gas masks.

They dropped gas bombs in all the holes in the village

Many villagers on the ground

They were shot in the head, and it was a horrible sight.

Luckily, handsome boy has made preparations in advance.

It's time to show the real skills

First, we send the little man to lure the ghosts to the entrance of the tunnel.

Lure the ghosts to the area where we set up an ambush.

Put down the quilts

Block the enemy's line of sight.

Let them fight their own men.

The other devils won't get away with it.

The road was blocked by two large wooden stakes on the left and right.

From the firing holes.

A volley of shots from all sides.

The Japanese have suffered heavy losses. This wave is a sure win.

After the gun battle subsides

The ghost captain found a suspicious wooden box on the ground

He reached out and opened the lid first.

It was a special gift from a handsome young man.

An ambush in the tunnels with many mechanisms

The first time could be a surprise

But by the second time. The third time

It was no longer effective.

Having suffered a loss, One Ear changed its attack strategy

Surrounding the village of Shandi heavily

Heavy weapons were used to bombard the village.

The villagers were wounded and killed.

The last wave of the group battle

We can't outsmart them, we can only attack by force

Hard and hard, to take the bottom out

He got a mine map from his dead father

There is an abandoned coal mine in the village

In the mine, gas gathered, flammable and explosive

And above the mine shaft

Is the Japanese army's rear arsenal

Here's the plan of the young handsome man

Open up the tunnel between the village and the mine

The problem was that there was a hill separating the village from the mine.

It would take a lot of time and manpower to get through.

And the kids could come in at any time.

The men and equipment in Shandi Village.

They couldn't hold out for long.

A scene from the movie comes to life

When one side is in trouble, all sides support each other

The Liujiazhuang Armed Forces come to support us.

In order to buy time for the tunnel digging project

The villagers and the Armed Forces used their limited equipment

With limited equipment and flesh and blood to build the last line of defense.

Part of them attacked the gun towers at the front.

To disperse the ghosts' forces.

Armed with bayonets and iron shields

Covering the village names as they moved.

Blocking the devils from entering the digging site.

The ultimate battle is about to begin.

The little devils are firing on all cylinders, and the army is pressing in.

The Japanese soon reach the entrance of the tunnel.

They were well-equipped and pressed hard.

But the villagers were not afraid.

The small men who seemed to have little combat power

They roared and strafed with machine guns.

Facing the rain of bullets

Until the last bullet was fired

The little man put on his mask

Running towards the enemy's saber with his bare hands

The honest and simple blacksmith and carpenter

Taking one with them is one

To buy time for the final excavation work

Finally, the handsome man crashed down the passage to the mine

He had tied himself up with explosives

To rush in and set himself off

However, at that moment, the big guy grabbed the explosives

Pushed the little handsome man away

Without hesitation, he rushed into the mine

The battle was finally won

The enemy's headquarters was blown to pieces

Will never come back

(A wife and child in a hot pit)

When the scene is highly combustible

Is also a tribute to the anti-Japanese heroes

The real battlefield is not like the anti-Japanese drama

And the difference in equipment and battle quality

Let us often use dozens or hundreds of companions

to eliminate one enemy

Those victories that are so exciting

Are nothing more than simple wisdom

And the blood and flesh of those who sacrificed their lives

Together they work miracles

This article was published by the #author at #Time on the #website name, if in doubt, please contact us.
本文链接：https://www.toomic.com/movie/345.html