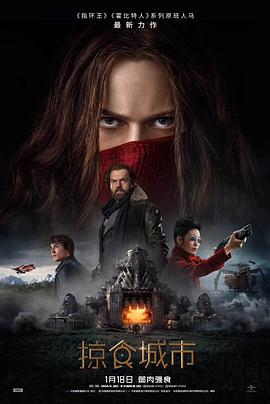 This town desperately tries to escape

But almost falls into a canyon.

Move the city and launch an iron hook at the town.

The people of the town flee in a hurry.

The people of the mobile city revel in it.

The mobile city, opens its mouth and swallows the whole town.

It is a predatory city.

It travels the world

Hunting towns for a living.

Today it will tell its story.

The world is full of sores.

So the survivors evolved a new way of life.

They built this city on a giant ship.

To compete for resources

Cities plundered each other.

The largest of these was

This city was well-equipped.

A huge organization with a clear division of labor

So that few other cities could match it

Except for the mountain cities of the East

Unlike the City of London

The Hill City advocated building a city on the ground

They built a huge walled city

With a wealth of resources

This kept the city of London on his toes

But there was nothing they could do about it.

Three Guns was the hero that everyone in London looked up to.

But he had a hidden ambition.

It was to restore Medusa, the pre-war technology.

To destroy the Mountain Kingdom.

The orphan Mei knows his ambition.

He infiltrated London in disguise

He stabbed Sanbun in the abdomen when he was not prepared

He was about to make a second stab

But she is stopped by Ergo, a museum employee

He accidentally pulled off his veil

What a long scar!

The local soldiers came to hear the news

They walk through the town cut by chainsaws

Xiao Mei is cornered at the end

A huge spiral of waste exits

She didn't have time to think before jumping in

Luckily, Erdog pulled her back

That woman is Xiao Mei's mother

Then broke away from the second dog's hand and jumped down

At that moment, realizing the identity of Xiaomei, Sanbao also rushed over

He actually pushed the second dog also pushed down the exit

Wandering aimlessly in the wilderness

But by chance, they were discovered by the scavengers from the south

A city that specializes in human trafficking

The two were nearly crushed to a pulp

But fell into a hole

They were rescued by an old couple.

It turned out to be another small mobile city.

The old woman gave them a room.

Maybe they had just escaped.

Or maybe it was the right atmosphere

Xiao Mei, who was indifferent and didn't trust anyone

Took the initiative to tell her story

The reason she wanted to kills three guns

It was because when she was eight years old

Three Guns wanted to keep it for herself

The two of them got into an argument

In a panic, her mother gave a necklace

handed over to Xiao Mei

And Three Guns killed her mother

Do you know how scary zombies are in the future world?

How strong it is in battle?

Three Guns knew that Xiao Mei did not s

In order to stop the future

He came to a prison

Three Guns ordered his men to blow up the prison

Erdog's side found that the direction of travel was wrong.

He didn't realize that the old couple

They are not good people at all

They are also from the south.

Xiao Mei and Er Dog were taken to the mall to be sold.

came to save Xiao Mei

The poor two had just left the tiger's den

They didn't get far before they ran into Dazhong

They tried their best to run into the city wheels

But the big strong easily catch up

A super electric wave of firepower

knocked out the big strong

But Erdog was left behind

Erdog grabbed the rope and climbed up

Dajiang pulled the rope down

Xiaomei threw down the seven heads

The three who escaped

came to the sky bottom guardhouse

Anna was his mother's friend

She had been looking for Xiao Mei for years

For a child of only eight years old

She could not imagine how she survived

And in fact, an eight-year-old child can't survive

Xiao Mei is alive thanks to Da Zhuang

Da Zhuang raised her for so many years

And now in order to take revenge

And broke her promise.

That's why Dazhong wants to find her

The reason why he killed her.

The bigger reason is

For the ancient technology item that Three Guns took

That thing is a computer core

Medusa might be able to see the light of day again.

The whole world will face another disaster.

At this critical moment.

Dajiang came after us.

Dazhong was not affected at all

Dazhong took down a group of people

Xiao Mei and Erdog ran all the way to the fence

Dazhuang got out from under the fence

The second dog fell to the ground

Just as Dazhong was about to kill Erdog

Xiaomei cried and asked Dazhong to let him go

Softened his heart and let them go

Dazhong fell to the ground with mechanical failure

This is when he saved Xiao Mei from her hands

Anna came in a hurry

Take Erdog and Xiao Mei to the Red Dragonfly

The sky shelter then exploded

Do you know how terrible it is?

In just 60 minutes, it nearly wiped out the entire human race.

Then he announced the attack on the Mountain Kingdom.

The wall of the Mountain Kingdom became his new hunting ground.

The wall of the Mountain Kingdom stood tall between the mountains.

For thousands of years, many people have been living in the wilderness outside the wall.

Anna led a meeting with the mountain kingdom

A big battle was about to start

Medusa slowly appeared in the sight of people

A bolt of lightning shot out from the top of London

The Yamaguni fleet was wiped out in one fell swoop.

A hole is pierced in the wall.

Ready for another shot

At that moment, Xiao Mei saw the statue on the wall.

She realized the meaning of the necklace

She realized the meaning of the necklace that her mother gave her before she died.

She found the decryption drive left by her mother

To get a chance of survival

Trying to shut down Medusa

At that moment, the mountain city was surrounded by fire

Suddenly, the walls were half breached again.

The mountain city will be completely destroyed.

The three cannons were ready to fire for the third time.

The Dragonfly Air Fleet, in order to cover Xiao Mei.

After sacrificing almost everyone.

Mei entered the city under the cover of Anna.

Mei successfully inserted the crack drive into the mainframe.

Fighting to the death with the Three Guns

In the last second before Medusa launches

Mei finally succeeded in shutting down the Medusa program

But Anna was stabbed by the three cannons.

Fell from the platform and died.

Escaped to the system control room.

With London's intention, the city and the mountain town will die together.

London City is unmanned at this time.

It can only keep going.

There is no way to stop

and Xiao Mei went to stop Three Guns from escaping.

Just when Three Guns was about to fight endlessly

Er Dog piloted the Red Dragonfly to save Xiao Mei

and fires cannon fire at the spaceship where Three Guns is.

The spaceship crashes at the foot of London City.

Then the city of London finally stopped.

The world is calm again.

The president of the mountain city is very tolerant

This article was published by the #author at #Time on the #website name, if in doubt, please contact us.
本文链接：https://www.toomic.com/movie/361.html