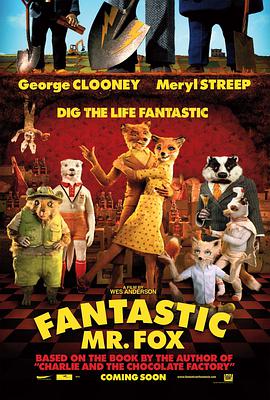 This fox is not a simple one.

Even if he picks a fruit, he has to make a dashing move

Father Fox and Mother Fox are a pair of thieves.

They are very skillful

They arrived at the pigeon house without a hitch

fell into a trap set by the farmer

They were trapped in the cage

Even so, Papa Fox didn't panic at all

But the mother fox told him that she was pregnant

He should never be a thief again.

The father fox could only nod his head and agree

Then they dug a hole and escaped.

In the blink of an eye, two years had passed

Writing a column for the newspaper

The family lived happily in a hole in the ground

The family had just moved into the new house

The fox's nephew came to join them

The four of them lived a quiet and peaceful life

But across the street from the tree house were three farmers

He eats three chickens for every meal

The short farmer runs a duck farm and a goose factory

and has a sweet tooth

The tall farmer owns his own apple farm

He drinks home made cider every day

With so much food to eat

He called on his old friends

He made a well thought out plan to steal

The first night, they infiltrated the fat farmer's chicken farm

Papa Fox used the blueberries he had prepared

Poisoned the hounds at the gate

Then they entered the chicken farm unhindered.

They were going to sneak out the back door

But then the alarm went off.

They had to climb over an electrified fence.

The farmer came soon after.

But they had already escaped.

The father fox lied to his family.

He said he had picked up the chickens on the road

At night, they went after another farmer

This time their team became three

They entered the cellar

There was all the cider of the farm hidden there

He was about to do it

But he was interrupted by a mouse

The mouse is the security guard here

And he's very good at it.

He rushed at the men with a knife

The father fox was about to fight.

The rat was attacked by his little nephew

He fell into the garbage pile

The door to the cellar suddenly opened.

It was the high farmer

The three thieves rushed to hide on the shelf

Fortunately, the high farmer did not see them

They had a good trip again.

They found out about Papa Fox's thievery

They had to kill him.

The three farmers hid in the bushes near the tree house

But the perceptive father fox found them.

The farmers saw their chance to shoot together

But only the tail of the father fox was shot off

She thinks that the fox father's behavior has angered the farmers

And the family was about to be ruined by them.

Before she could say anything else

The farmer was going to destroy their house

He forced them to come out in this way

The house was about to collapse.

The foxes used their best technique - digging a hole

Finally they reached the safety zone

But the three farmers on the ground had prepared excavators

The three farmers were so desperate

They mobilized all the workers

They were ready to trap the fox dad under the ground

On the other hand, the father fox met a family of moles

That is, not to dig down.

They dug a hole along the side

They ended up digging right through to the chicken farm

They happily moved all the farm owner's stuff

All their own stuff was stolen

The three farmers were furious

But under the ground

The animals had a party

They stole enough food to live here for a while

But the farmers came up with a new solution

They flooded the whole hole with cider.

All the animals were washed down the drain.

Two little foxes tried to steal from the lady of the house.

But they were discovered.

Only one of the two foxes escaped

The nephew of the fox's father was taken away by humans

The animals were also washed down the drain

Trapped in this place

He confessed to the mother fox

He shouldn't have stolen from others

The family got involved

Mother Fox was also disappointed with him

Because he failed to keep his promise to himself

But she encouraged the fox father

Because this is the nature of foxes

The father fox regained his strength

He gathered all the animals

Prepared for the final battle with humans

To save his nephew

And the farmer was already prepared

He knew that Papa Fox would come to rescue him

So he set up a net

The animals first used fireballs to disrupt the enemy's formation

Then the father fox and his two helpers

took advantage of the chaos and rushed out

They arrived at the prison where the little fox was being held.

At the entrance they met a hound

The father fox told them to find the little fox

He stayed behind to cover them

Fortunately, he escaped to the roof

He escaped the hound's chase

The four of them gathered in the garbage pile

Preparing to escape from the prison

But the farmer and his men had blocked the prison gates

They were waiting for them to throw themselves into the trap.

He wanted his tail back, which the farmer had knocked off.

He wanted to regain the honor that belonged to him

No sooner had he said that than

Just at the critical moment

The fox's son stood up for him

He nimbly dodged all the bullets

He opened the door where the hound was being held.

The hound rushed towards the people

All the people scattered and fled

On the way home, a wolf suddenly appeared

But the father fox was not afraid at all

He stopped the car and greeted the wolf

On the opposite mountain peak

The black wolf also saluted him

The fox dad protected his family

And fulfilled his responsibility

He deserves the wolf's tribute

He is a true knight

A few days later, the animals had a new home.

And this time, above their new home was a supermarket.

They started to enjoy the food again with impunity.

This article was published by the #author at #Time on the #website name, if in doubt, please contact us.
本文链接：https://www.toomic.com/movie/397.html